I've lusted after an S15 since I first remember seeing one -outside of Gran Turismo- in 2006, this one in particular 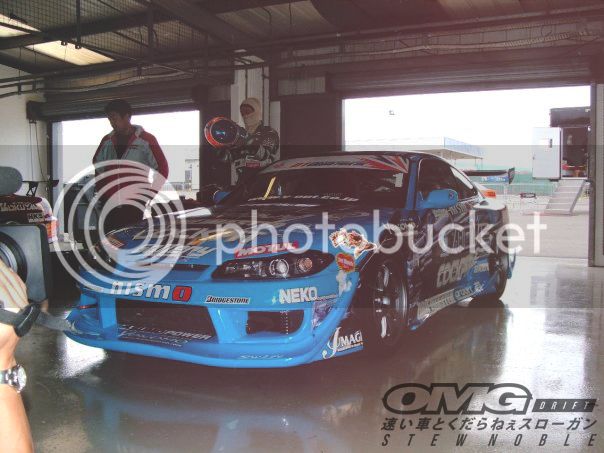 After exchanging many messages, photos and video at the beginning of April I purchased a standard 1999 S15 Spec-R from a forum member, almost 500mi away in Scotland.


The car had been in the UK since June of the pervious year and spent most of it's life locked in a hanger on an RAF base and had been undersealed when entering the country. 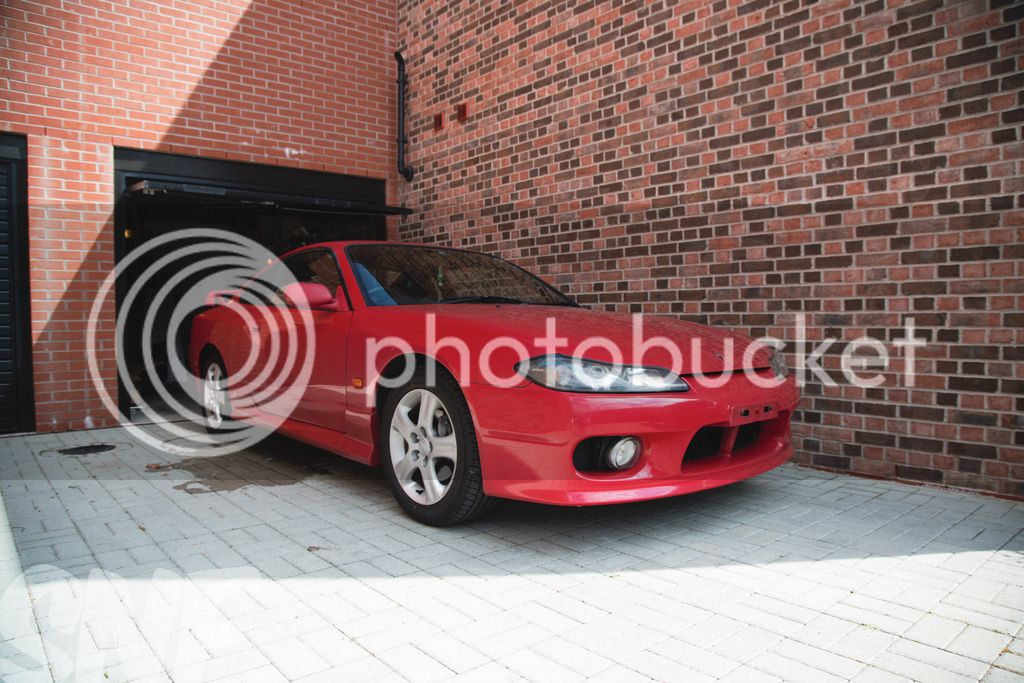 Initially the boost was reading a little low on the OEM gauge, however this was just down to the small hose that is connected to the sensor being so perished it was just about hanging off. Replaced this part and all was well again.

Although the car photos well, it is MANY different shades of red, some due to fading and some due to incorrect colour paint having been used in the past, however the car is exceptionally clean in all other respects.

The first modification was a NISMO 3" cat-back, it was for sale at a very cheap price as it required a small fix to some rust on the mid section. This was an easy fix and under the layers of dirt back box looked to be in awesome condition. It sits 25mm higher under the car and produces a pleasant sound, whilst remaining pretty sedate, despite the offensively sized tip! It's a neat piece that'll do until I require a larger bore in the future.

Next I picked up some Kaizen Force coilovers and arm set, although they're a pretty new brand the quality appears to be excellent! 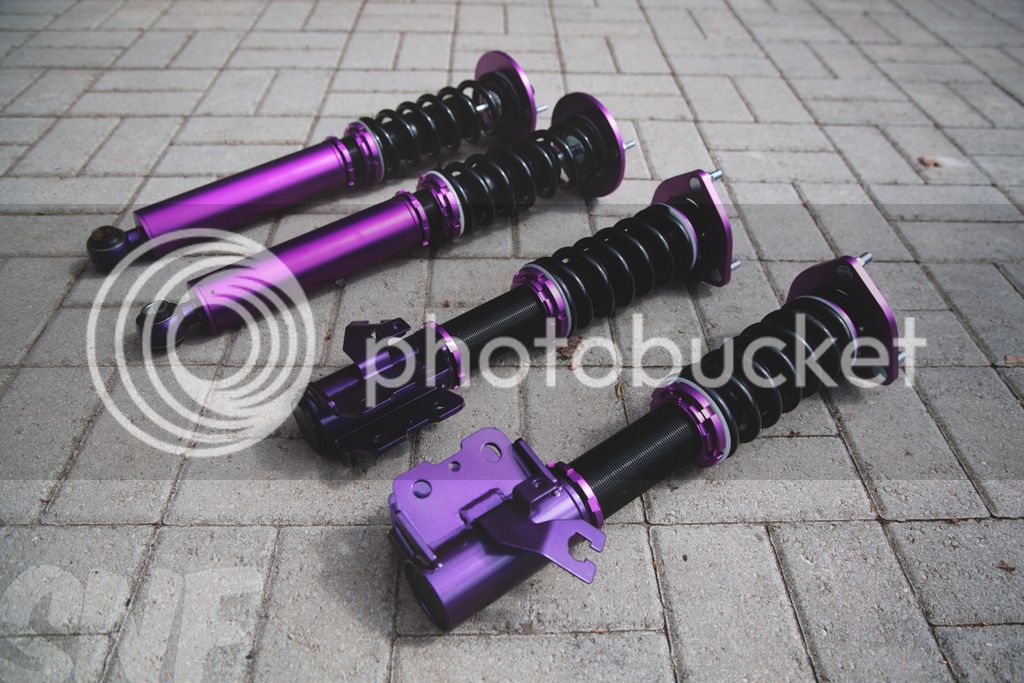 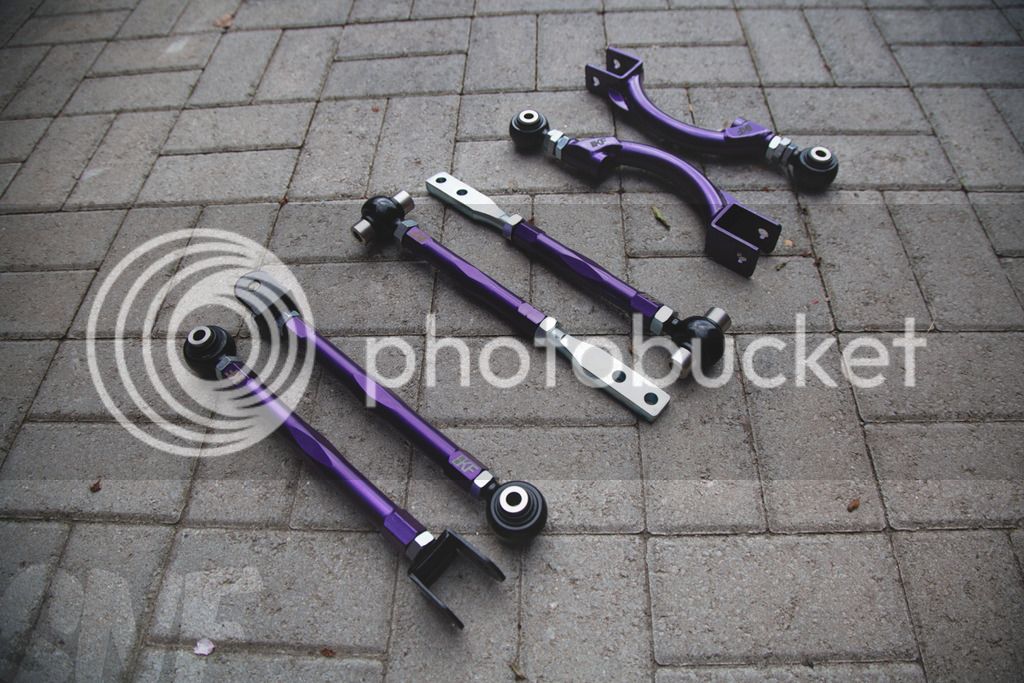 At about the same time I had picked up some wheels, AVS Model 5s in perfect 17x9 ET22 sizing. They'd seen better days and were an ugly shade of dirty white, I had them fully re-furbed in bright silver to bring them back to they former glory. 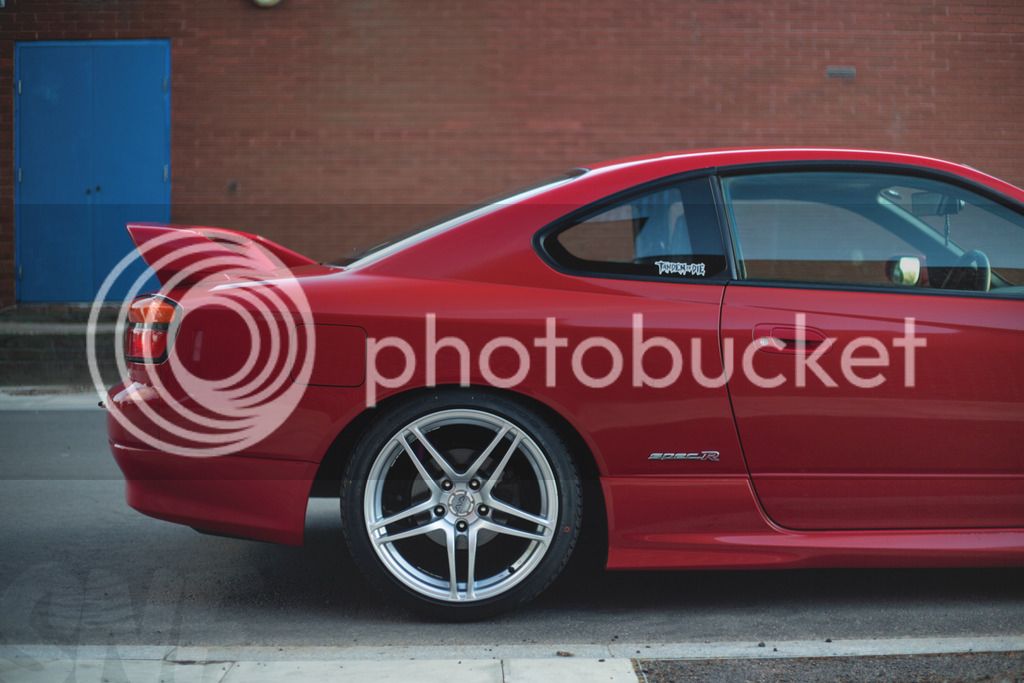 Fitting all the items was quite the learning curve for someone who's essentially been a Honda Civic guy for the past 7 years, however it all went very well, with only one small modification required to increase clearance of the rear camber arms to chassis and of course rolling my rear arches. 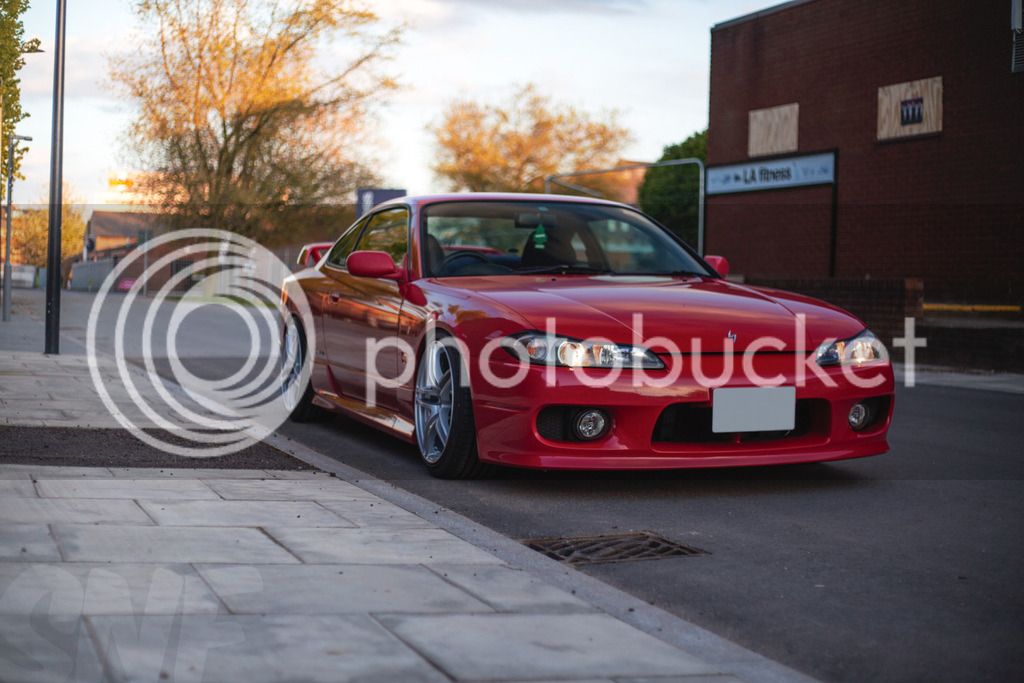 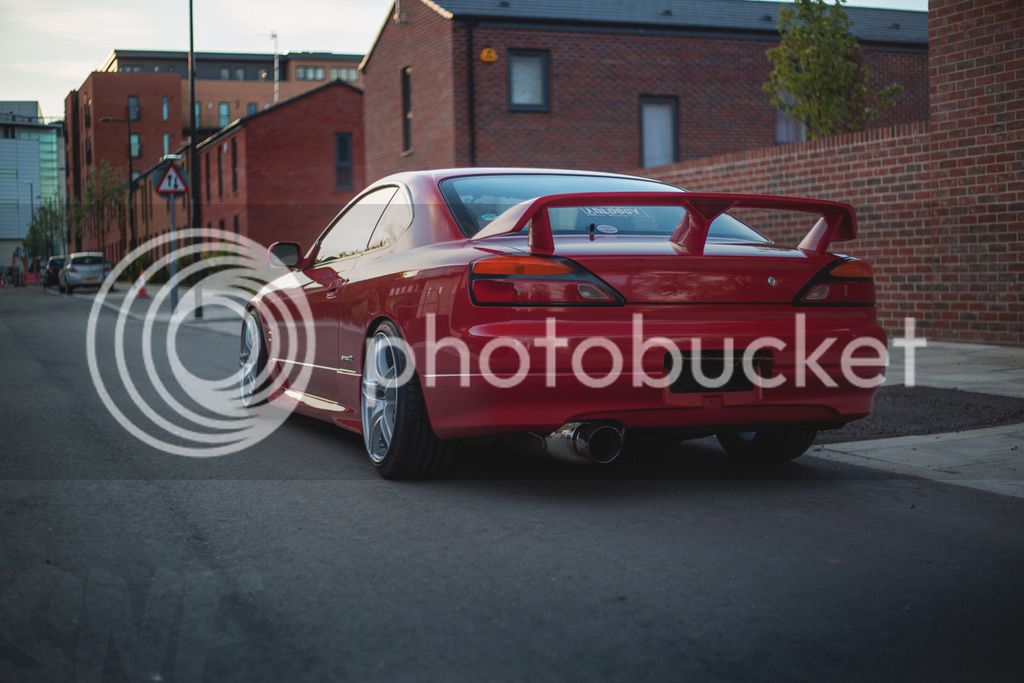 I couldn't be happier with the outcome though, form and function in unity!

Less than a week later my rear N/S wheel bearing started clunking quite loudly so I removed the hub and purchased a new bearing and handed it over to a local engineering place to press in/out for me this week, ready to reinstall as soon as I have it back.

With the ride height so low the geo is way out so I'm having it aligned this weekend.

Love the GT Video man that is EPIC!

Car is looking very clean and no seen the Kaizen Force stuff before it looks good!

Great looking vehicle, I'm pretty sure this is actually the car I was interested in buying!

At that height with those wheels... stunning!

Haha love the little video!
Saw this somewhere recently (that photo of the front end) cant remember if it was instagram or the fb page, but love it either way, and those new wheels really suit it, I really like them
Good little find there, even if she is 50 shades of red haha

Thanks for the kind words, all!

Love the GT Video man that is EPIC!

Car is looking very clean and no seen the Kaizen Force stuff before it looks good!
Click to expand...

haha the vids just a little bit of fun!

It's produced by OPJP, I can't fault the quality or fitment at all so far :thumbs:


Lil SpecR said:
Haha love the little video!
Saw this somewhere recently (that photo of the front end) cant remember if it was instagram or the fb page, but love it either way, and those new wheels really suit it, I really like them
Good little find there, even if she is 50 shades of red haha
Click to expand...

I stuck a photo on the S15OC FB page a while back, that's right.

Thanks, the seat I picked up from you was ideal too. I used the back-section fabric to replace my worn drivers side back, once fitted the differences between the passenger and driver can't be seen )

I'll get it painted at some point, but the expense isn't really worth it at the moment I don't think.

The KF kit looks lovely, let us know how it holds after some time of good use
S

If your heading over to A-Line, give me a shout.

It's Stokes by the way.

If your heading over to A-Line, give me a shout.

Hey man, thanks! See you're back in the S15 game too 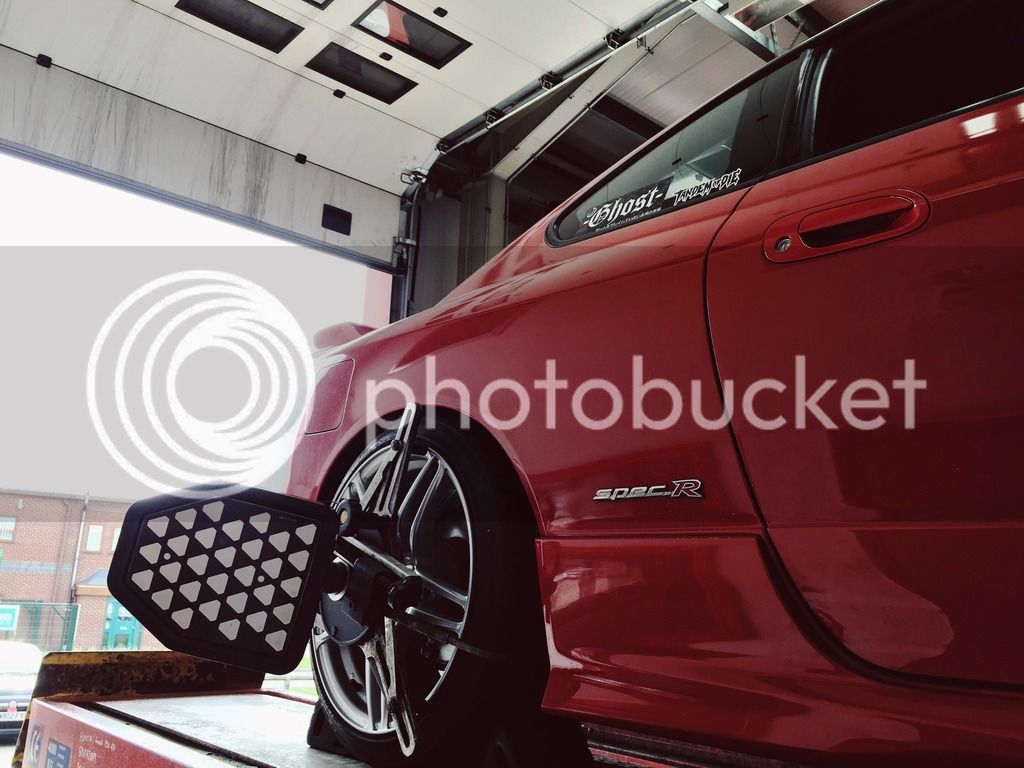 I ended up getting the alignment done locally to me today as I already had the setup I wanted, considering it was setup on my drive by eye using two axle stands and some string it was pretty close, but now it's spot on

What camera are you using? looks good quality.

What camera are you using? looks good quality.
Click to expand...

Thanks, I shoot with a Canon 5D MKIII. Although that last one was just my phone
H

Stew said:
Thanks, I shoot with a Canon 5D MKIII. Although that last one was just my phone
Click to expand...

Really pleased the seat did it's trick!! and now u have spare bolster material too if u need it hehe

Sent from my D6603 using Tapatalk

Some were, yeah. The ones in the city were 50mm though


Keifer1903 said:
Looks awesome come along way with it Looking forward to see how this carries on

Thanks, I plan on it being a long term project for me so I'm sure lots more updates will come!


Lil SpecR said:
Really pleased the seat did it's trick!! and now u have spare bolster material too if u need it hehe

Sent from my D6603 using Tapatalk
Click to expand...

Unfortunately the internal cut-outs in the foam don't let you interchange them left-to-right like the fabric covers, but my apart from the worn fabric the bolster itself was alright away :thumbs:
A

I'm quite useless at documenting stuff I do to the car, in the latter half of last year before I took the car off the road for the winter I did the following too: 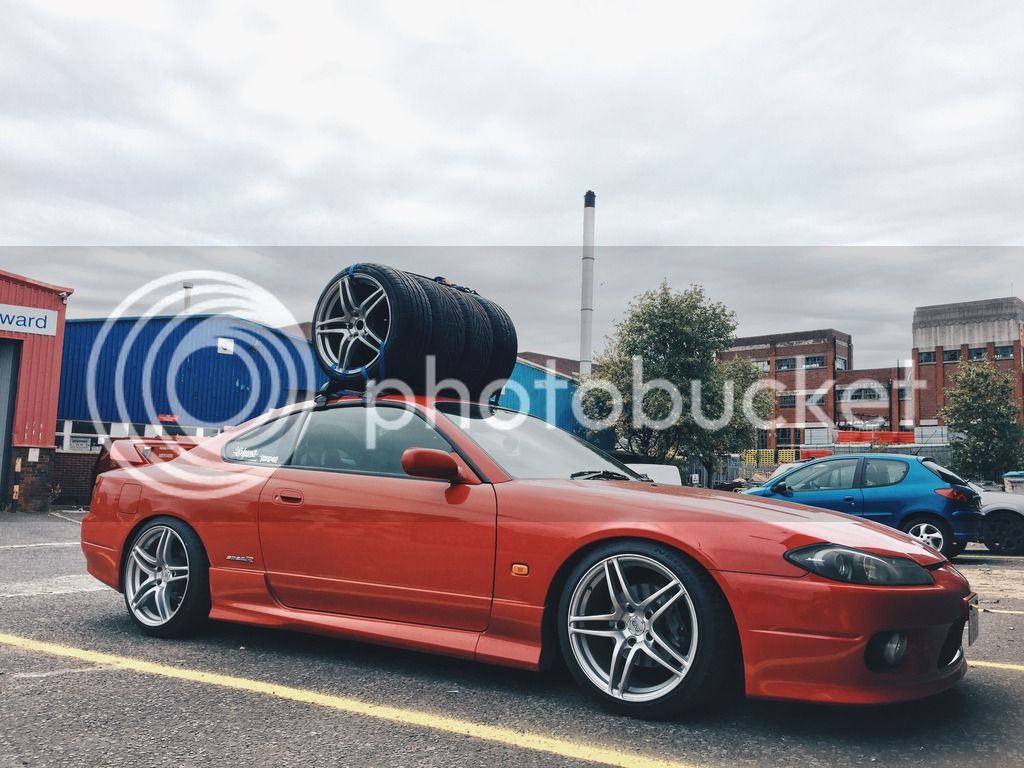 I picked up a pair of 18s for the rear to run a staggered setup, clearance inside the arch is a bit challenging with these fitted, so I had to increase the ride height a little to prevent contact. 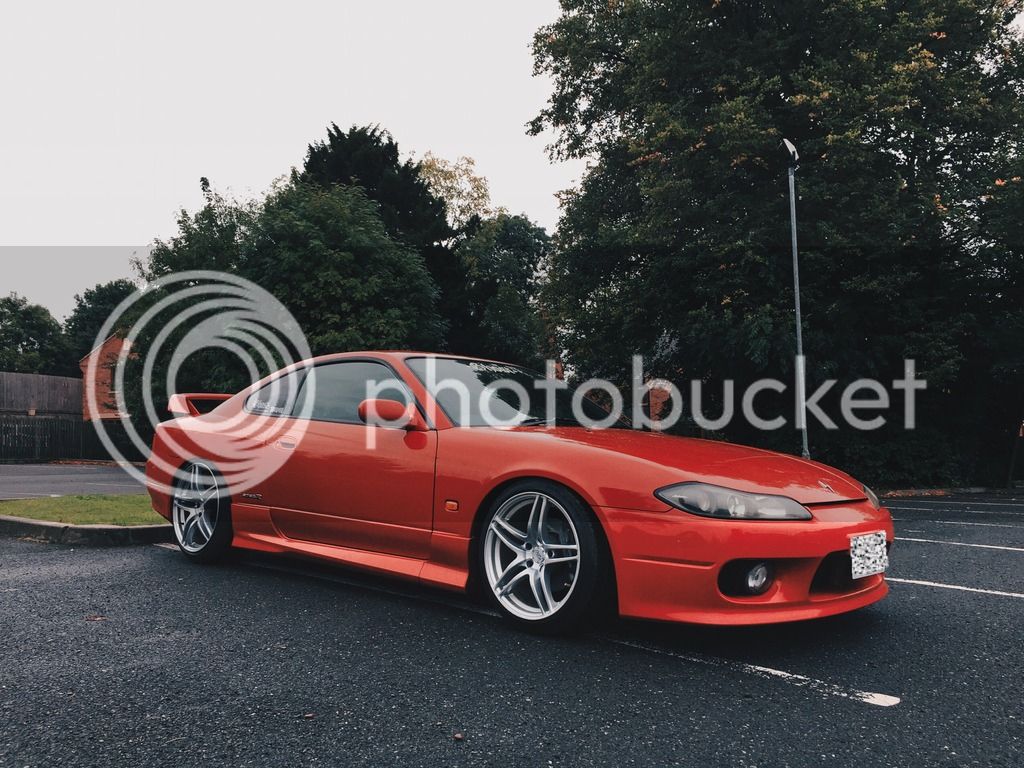 Around November I decided it was wise to take the car off the road for the winter and do a few tasks in preparation for the upcoming year...I will make it to a drift day without doubt. 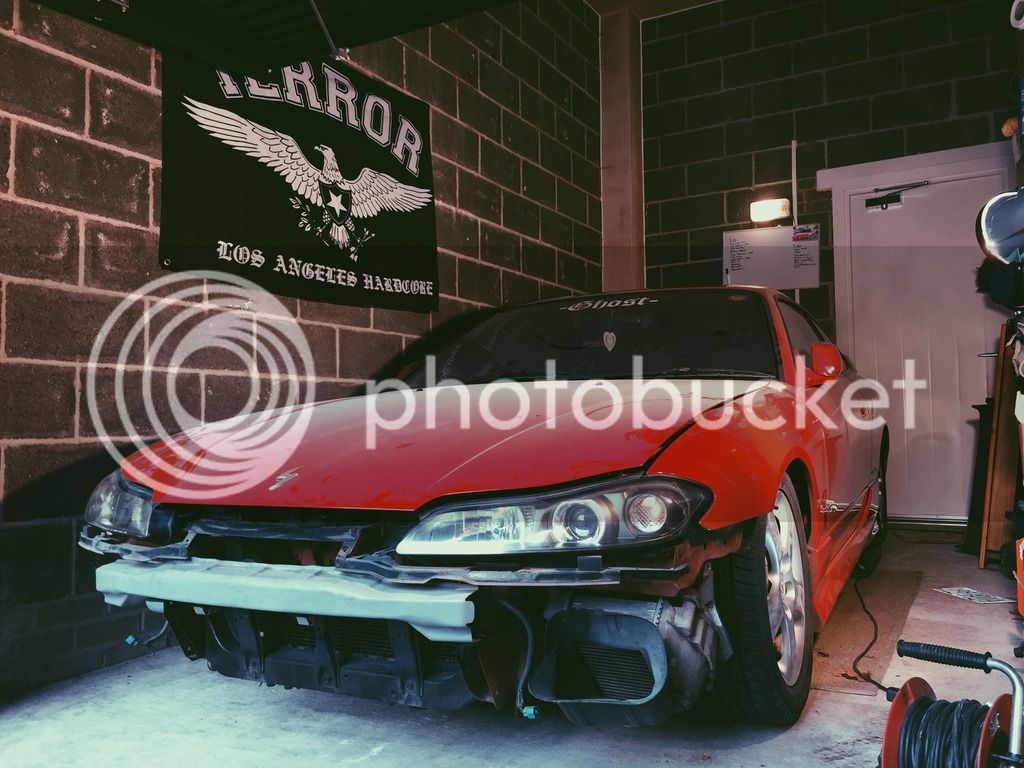 I picked up a CUSCO RS 2way in the correct casing to be a direct fit, it wasn't easy to handball it in on my own but got it installed and intend to replace the diff oil before driving the car properly again as I don't know what is in or when it was last changed. I also installed DW solid diff bushings at this point.


I also picked up a spare subframe and hubs to have modified for a little extra lock and correction of my silly ride height. To accompany these are a set of Tien steering rods/ends/rack spacer, Driftworks front lower arms and some SuperPro steering rack bushings. 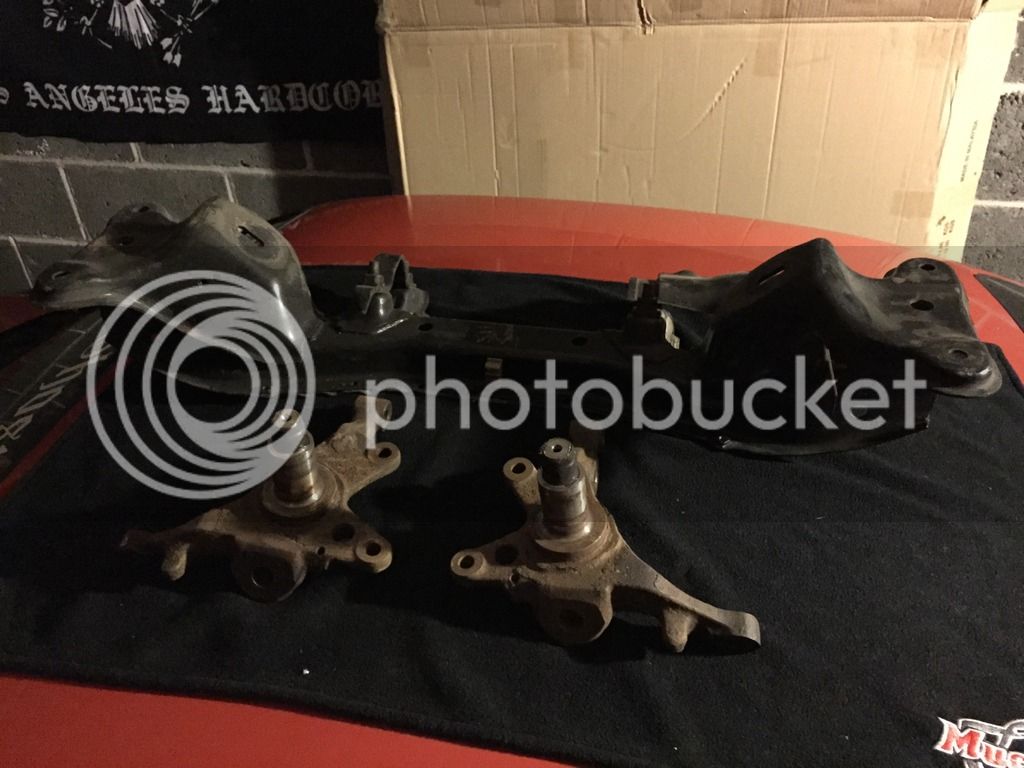 I hope to pick up the finished subframe and hubs this week, then I'll have them powder coated before fitting along with the rest of the above parts.


To accommodate the additional lock and retain ride height I removed the inner arch liners and trimmed the lip from inside the front wing. With the front end in bits I was a bit concerned that without the arch liners the OEM side mount intercooler would quickly be trashed by stones etc ejected from the front wheel.

With everything removed it was an ideal time to protect the inner arches properly, in leu of the arch liners.
I roughed the surface of both the inner arch and front wing, applied Bilt Hamber zinc primer, seam sealed the inner arches and then followed up with a generous amount of stone chip. With the cavities sprayed with Bilt Hamber Dynax S-50 and the left over used for a protective coat on the arches themselves.


I had initially been keen for a high mount, to keep the intercooler out of harms way, but this would require me to ditch the air conditioning and I didn't really want to do that as it works totally fine. I opted for a Japspeed item, truth be told it required quite a lot of fiddling and modification to fit neatly but it's just about there now.


I'll add some more images and try to keep things updated a bit better now I have so much to get on with!

I had a good afternoon on the car this weekend, I was lucky enough to have a knowledgable friend modify a spare front subframe to move the rack forward in the car to negate the use of offset spacers once I begin reassembly of the front end with the modified drop knuckles. 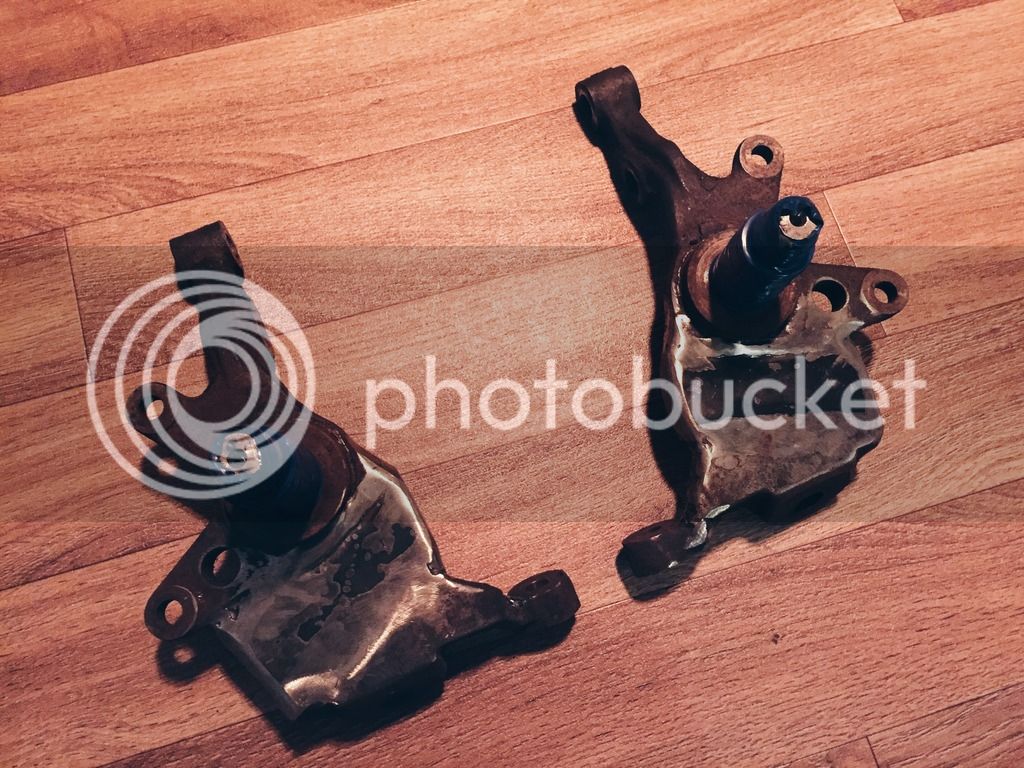 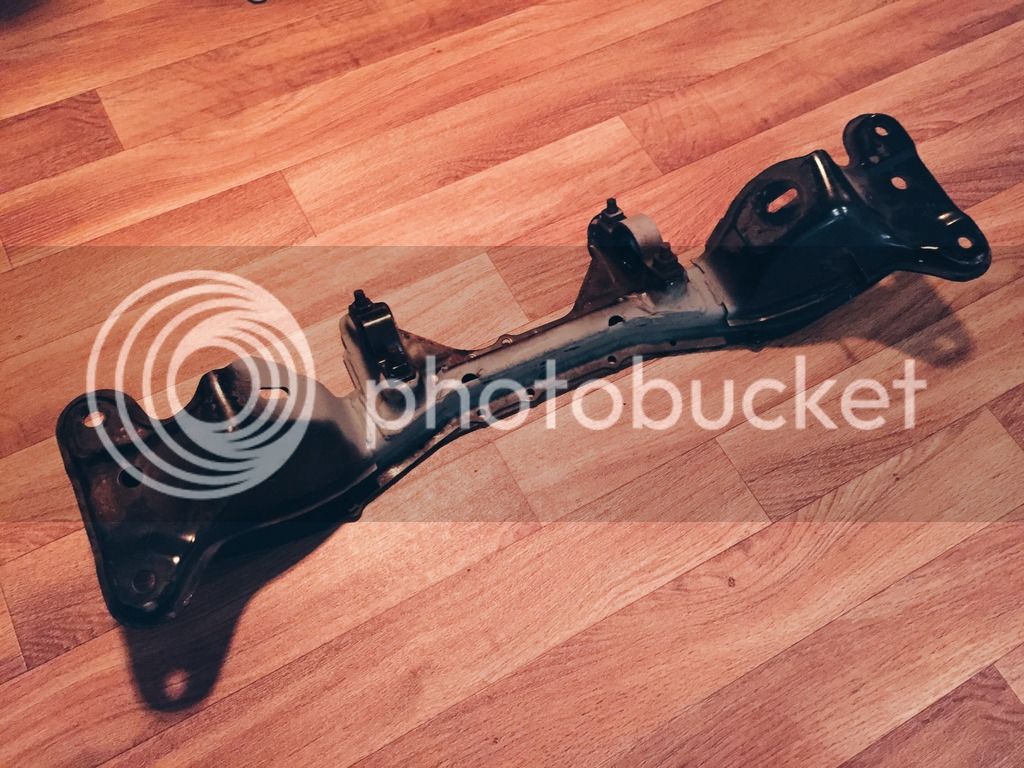 I dropped out the old subframe and engine mounts in one as I will be replacing the mounts with fresh Hardrace units. The engine is now supported by the beam ready to accept the new subframe that should be ready to collect from the power coaters next week. 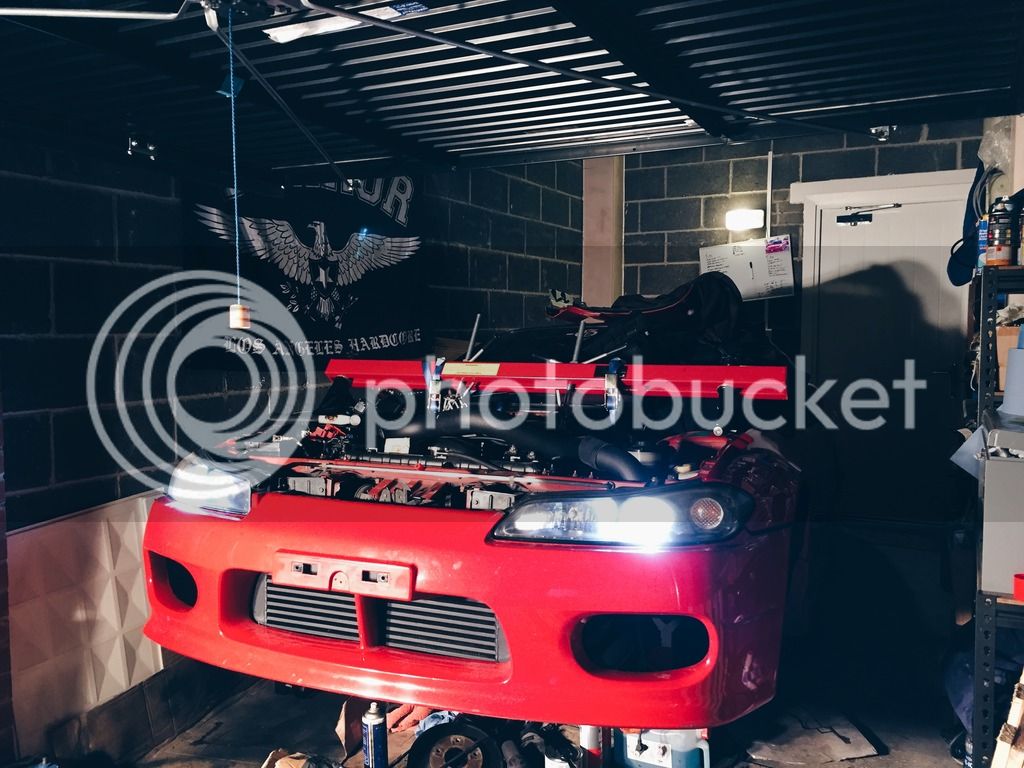 In the mean time took this opportunity to offer up the front bumper to the front mount and assess where would need trimming to fit, thankfully it wasn't much, but the fog lights had to go