I thought it was about time I posted some pics of the new motor. I have had it for a couple of weeks now and I am loving every minute of it. It took me ages to find a low mileage car that was very clean inside and out but I finally came across this one. Its done 23,000 miles, and it is very clean in every way, already for me to take apart.lol

Coilovers being fitted before it left JM-Imports: 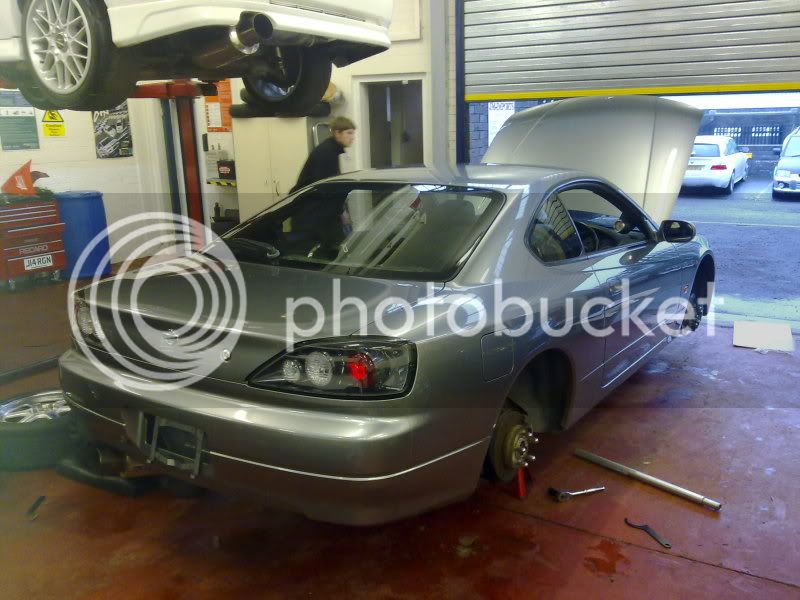 The trip over the hills coming back from JM-Imports: 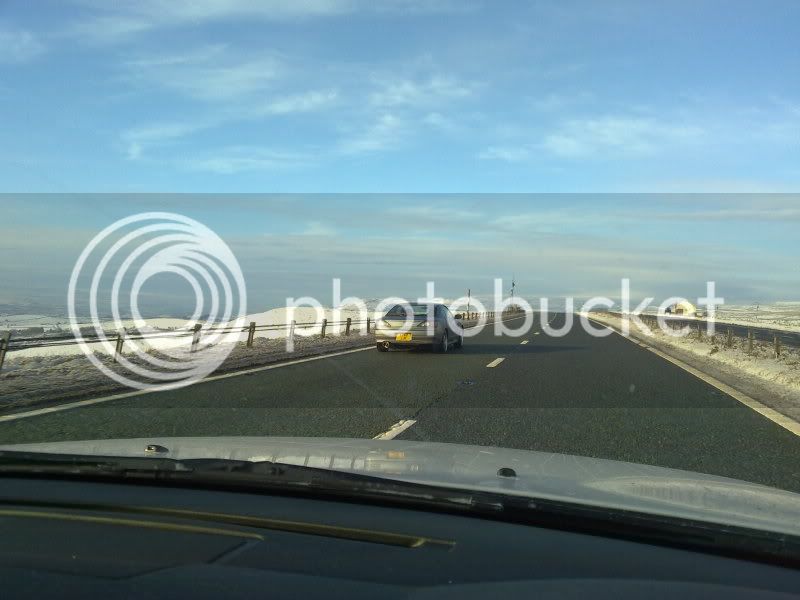 Heres some of the car as it stands now.....not for long though: 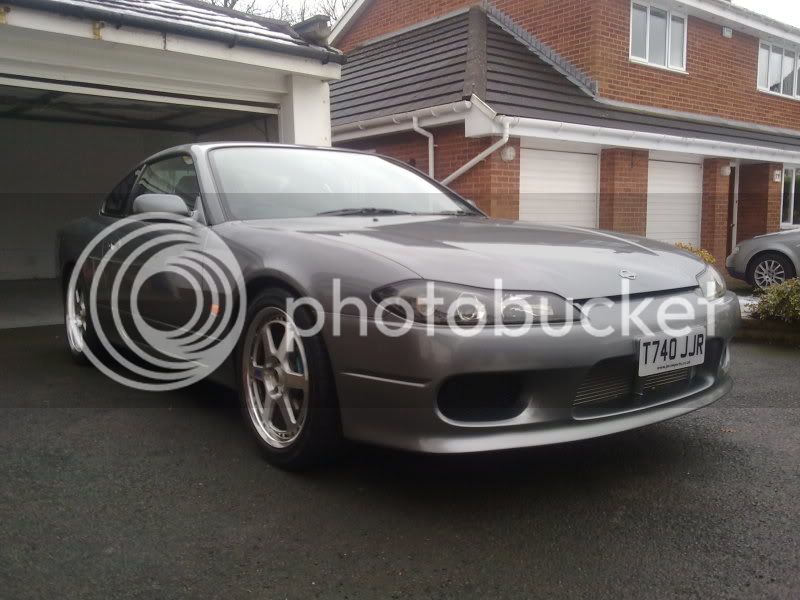 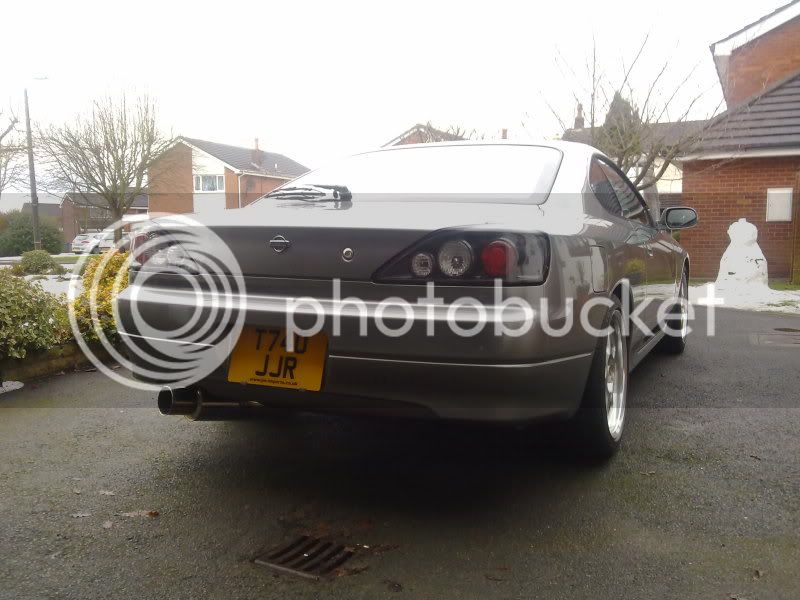 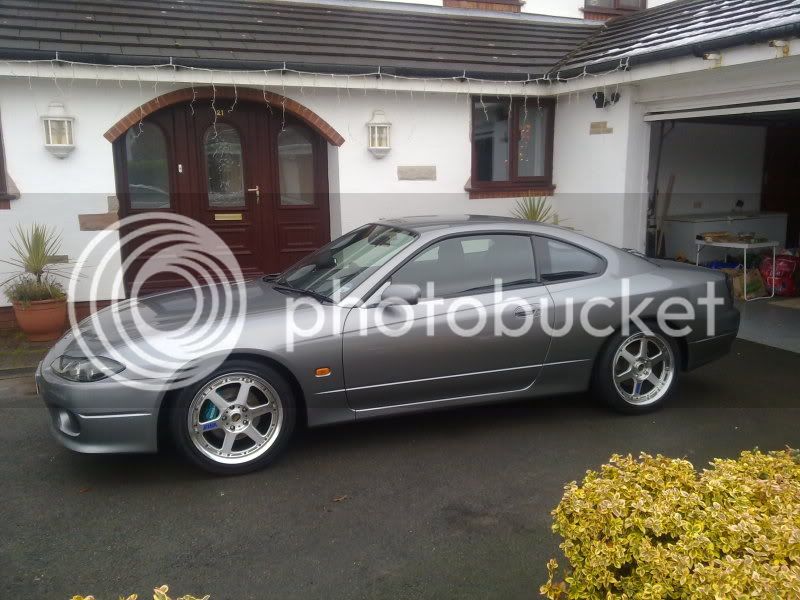 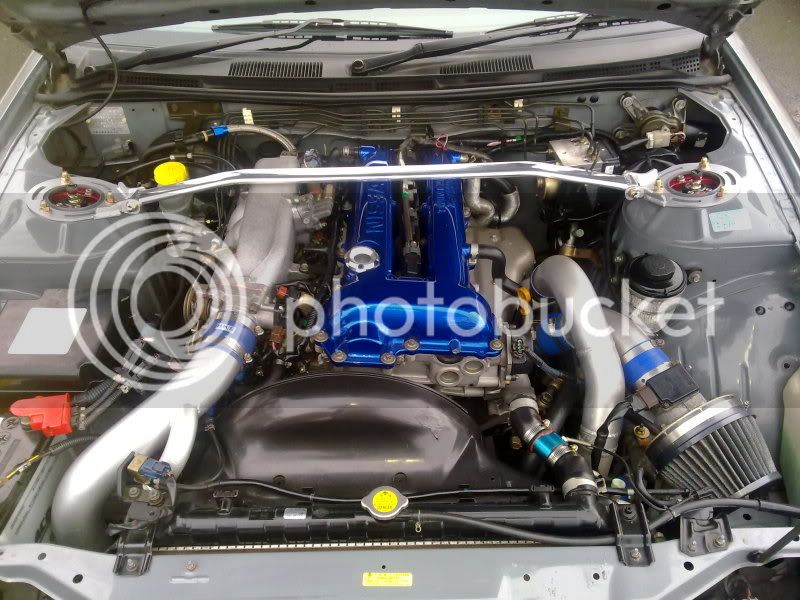 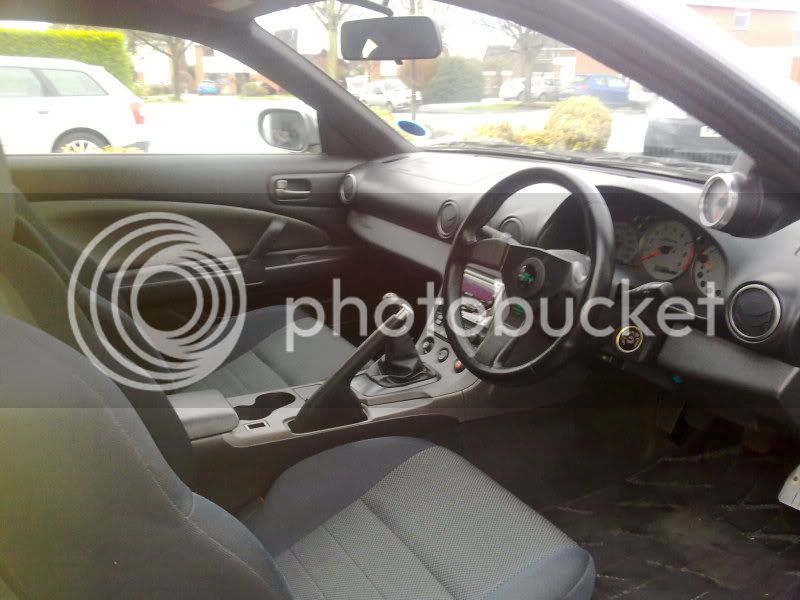 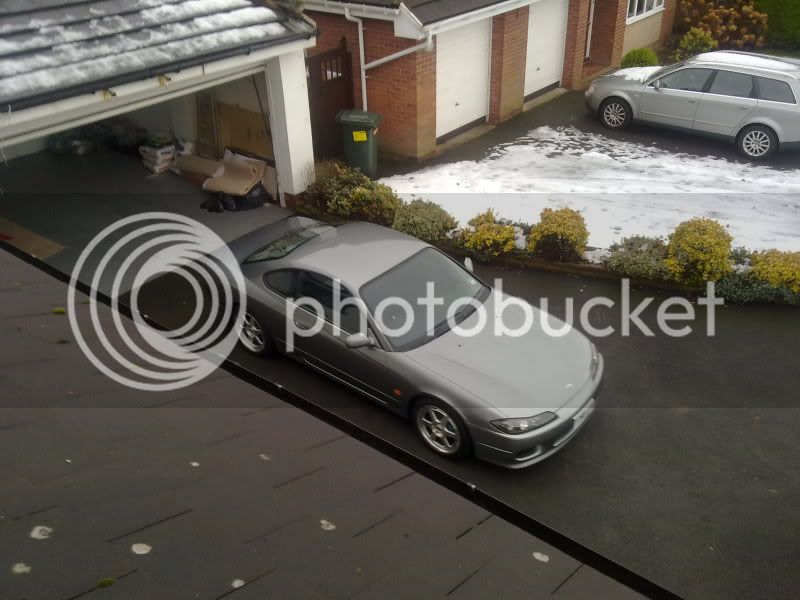 A really big thanks has to go to Jurgen Vallons of JM-Imports for helping look for this car, as usual his service is second to none and the car is always as described. Thanks again bud. :thumbs:

I thought I would have a trial fit of the new wheels to measure how far they stick out to see if they are in line with the new kit that is on its way over and it works out perfectly. 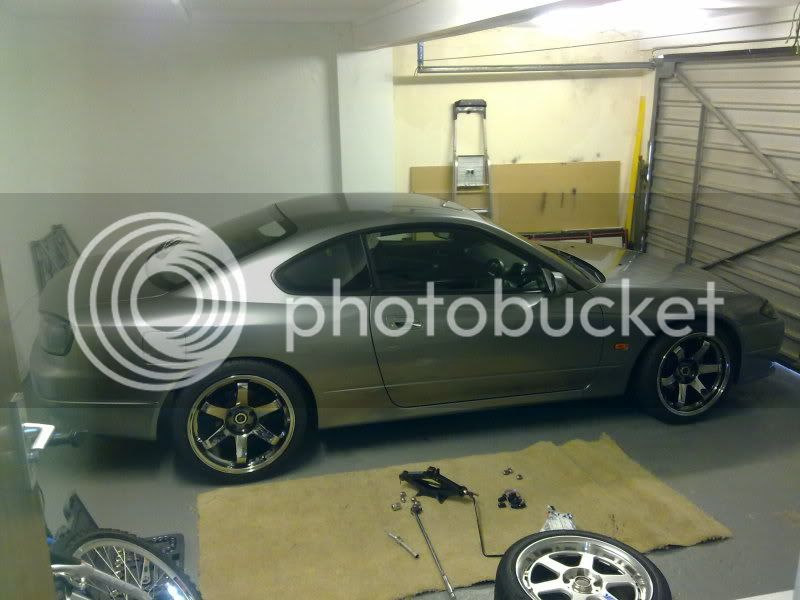 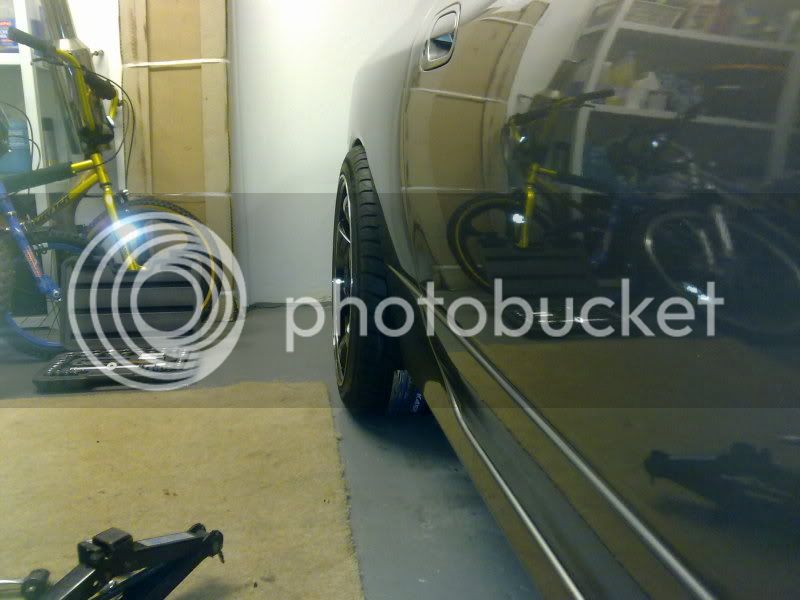 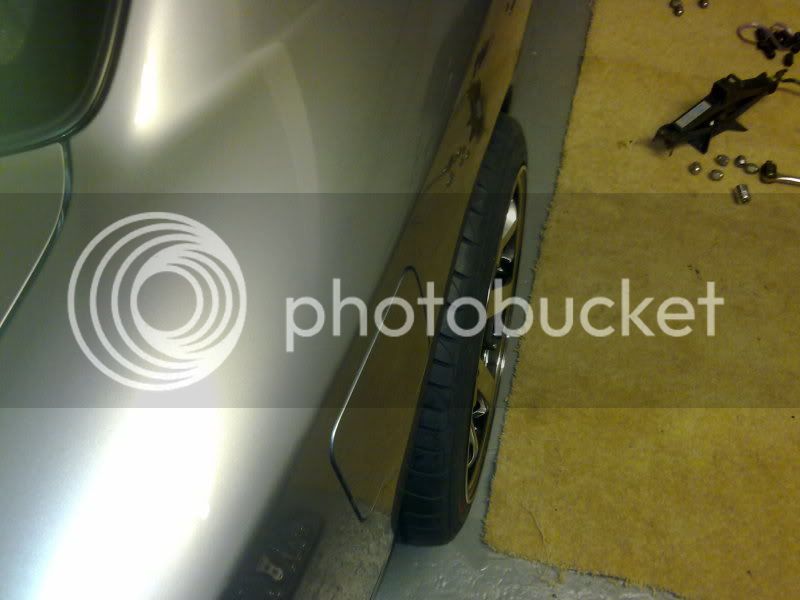 The front wheels will need a spacer to bring them away from the apex Gen2 coilovers so I have also ordered some longer studs so that I will have plenty of thread for my nuts.

The current 17" Volk split rims will be up for sale in a few weeks if anyone is interested.
C

Nice pics mate, it does look very clean under the bonnet.

What kit are you going for? I'm guessing its going to be a widebody to get those wheels in the arches!?

Yep, its the wisesquare Behrmann D1GP widebody kit, same as this: 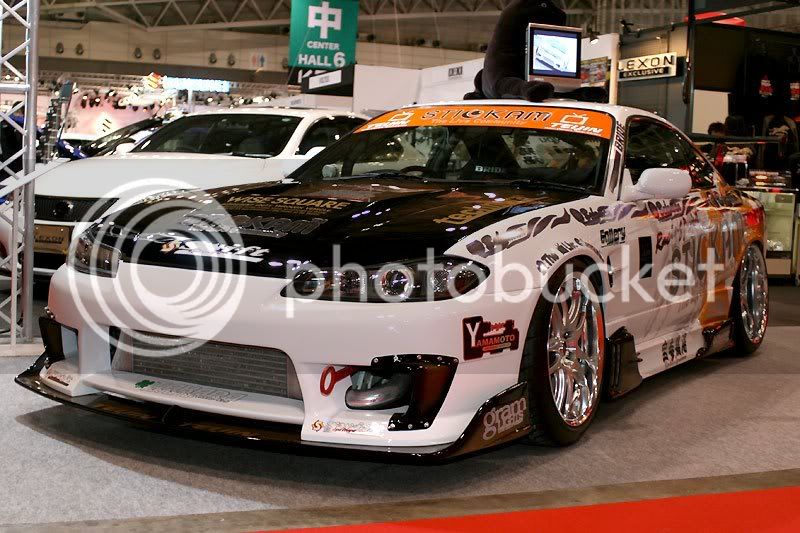 When finished the car will be a show car so I wanted something that has not been seen over here yet (I think)lol.

I was very lucky in catching a container that was coming over here from Japan so I saved a few quid on the cost of shipping etc, otherwise the kit would of cost alot more than I wanted to pay.

Nice pics Gav you keeping the colour the same after the kit is on, or you thinking something different for the paint work as well?

I think I will keep the colour as I really like the pewter. My last few cars have all been white so I thought it was about time for a change and go with a grey.

But I have been known to change my mind alot.lol

I am going to keep the metallic blue theme under the bonnet though.

Very clean car you have there man, liking the rotas too very good choice! Besides the kit and wheels what are the major plans for it?

Its being rolling roaded next week to see what it is pushing out at the mo and then it goes into our workshop www.thespeedfactory.co.uk on the 4th of Jan so we can see what work has gone into it already (very little as it is so original). I have a full 3" system, up pipe, turbo elbow, headers, race rad and power fc sat here to go on initially but I am toying on uprating the injectors and turbo. Obviously the engine bay is going to have some bling.

Interior wise I am deciding on whether I just go with a leather re-trim on the standard interior or swap the front seats for some sparco's. The FC commander is being moulded into the centre console and then the whole grey part of it will be sprayed in piano black.

Alot of attention will be spent on the suspension setup as I want the car nailed to the road. I am not going down the drift route with it as I have another project in mind for that.

The kit will be here on the 20th of Jan and then it goes off down to www.a-b-w.co.uk as he is the only guy I know and trust to do a perfect job on the kit and custom work. He was the same guy who built the kit I designed for my previous scoob (it can be scene in ABW's hawkeye subaru T260 section on his website).

I have only just got the car and over the next couple of months I will never see it.lol
Last edited: 21 September 2010

Gav - car's looking immense and will be a beaut once the wheels are properly on and the kit's sorted!!

Just in case you need some tips on getting longer studs fitted to the fronts I've just written my first 'guide' on how I did this myself... was a Boxing Day mod which made it just that little bit special lol


We soooo gotta meet up when you've had all the extra touches sorted next year :thumbs:

thats gonna be nice with the gp kit on - and a real nice clean starting point you have there, love the wheels:nod: dont think there are any other gp kitted s15's over here but could be wrong.....exclusivity rocks

Thanks for the great comments guys.

I will have a good read through your thread James as I will be doing the studs next week so thanks for that as I am sure I will need as much help as possible.lol

You are right! we really need to meet up at some point, it will be great to get several of us together and get some group shots of our motors.

and I hope your right Dean in it being the first over here, you watch! I will go to all the shows next year and I will see another one.lol

Can I ask Gav where you are taking the S15 to get on the rolling road? I still need to get mine done, as I don't know for sure what its pushing out.

Its our place matey, based in chorley, give us a shout if you want to come down.:thumbs:
Last edited: 2 August 2010

Cars being rolling roaded this week and I will post up the results.
Last edited: 2 August 2010

Ace!! Would be great if you can scan the printout afterwards and post it on here... be interested to see the 'curves' lol

Where abouts in the north west are you?
There seems to be quite a few round here now we should get together and get James(LuPix) to come take some pics lol.
What you think James??

The reason I am doing it is so I can see what the car has before we start modding it, also to see if everything is running nice and the curve is smooth.....which I doubt.lol

I have organised quite a few rolling road days at our place so we could always organise a full day event some time in January if anyone is interested. Usually we get about 18-20 cars on in a long day.

I am just based in Euxton and our RR is in Chorley.

If S15AK has one of the slots this Thursday then there is one more available if anyone is interested, it will be about £35.:thumbs:

Piece of mind knowing that your car is running ok, even if you already know what power you have.:nod:
Last edited: 2 August 2010

Deffo best thing to do before all the tuning starts - I had mine hub dyno'd @ WGT before I started making all the performance mods and when Pip did the remap with Apexi PFC, we could compare the exact graphs as a before and after exercise and this was very useful to see how much more I was getting after the remap session


lol I go to Horwich (near Chorley) about once every 3/4 months so I'm familiar with the area... we used to get Sunday lunch at the Yates pub in Chorley (next to large carpark)


Guys - I can't make this Thu but in future if you do plan a get together or another RR day then I'll deffo put it in my diary and come up with cam and lighting equipment :thumbs:

thanks for the offer Gav but we've got family over from Oz at the mo, so not really a good time, thought you meant you'd be getting it on the rollers on the 4th, which I could of probably done.

If I get time I might just pop along and say hello anyway, but will have a lot on being New Years Eve..