Hello, I'm Mike and I stay in the north east of Scotland.

Well I've owned my S15 since March this year and have only just signed up after Keifer recommending the forum.

When I first bought the car she looked like this : 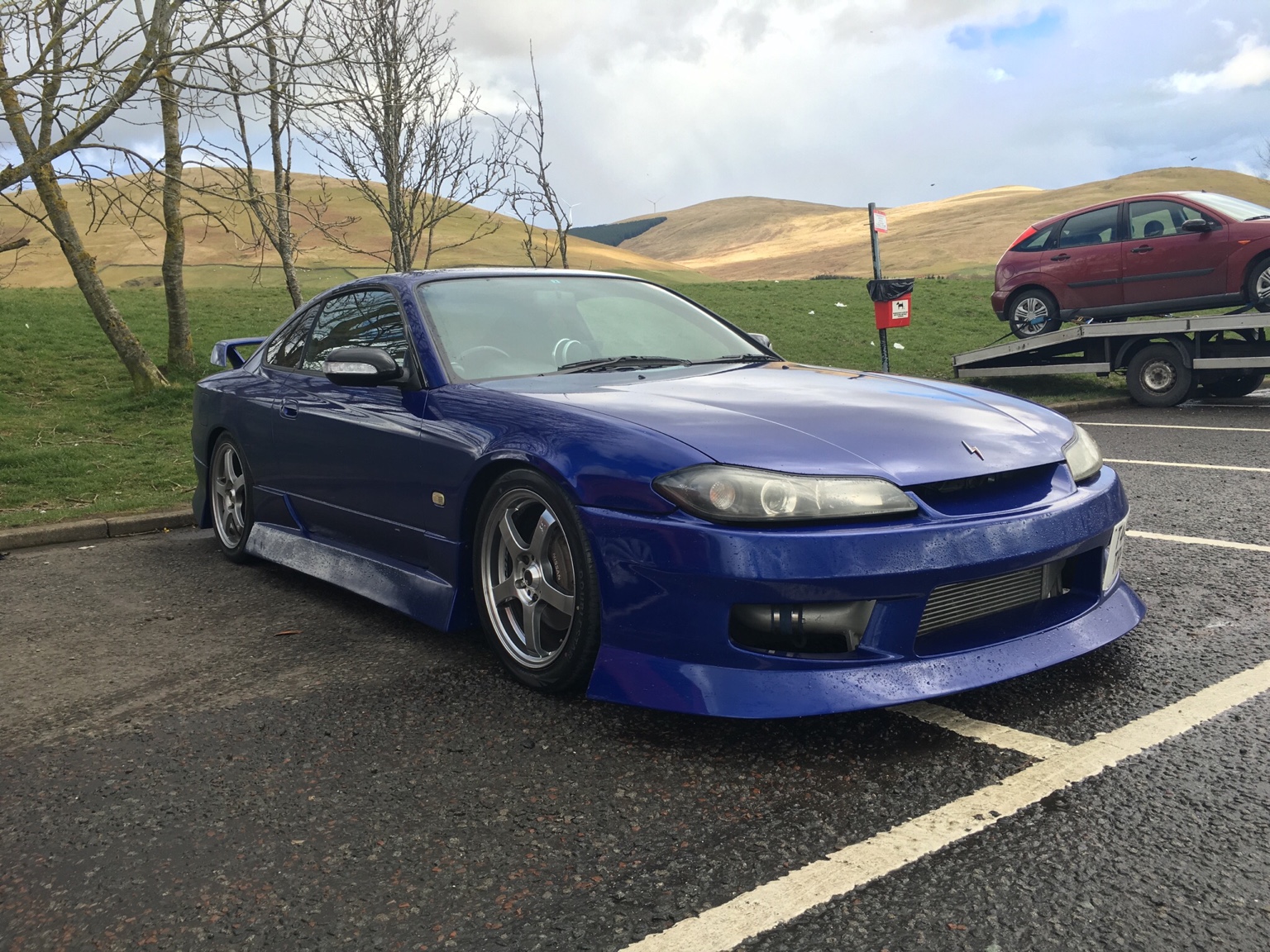 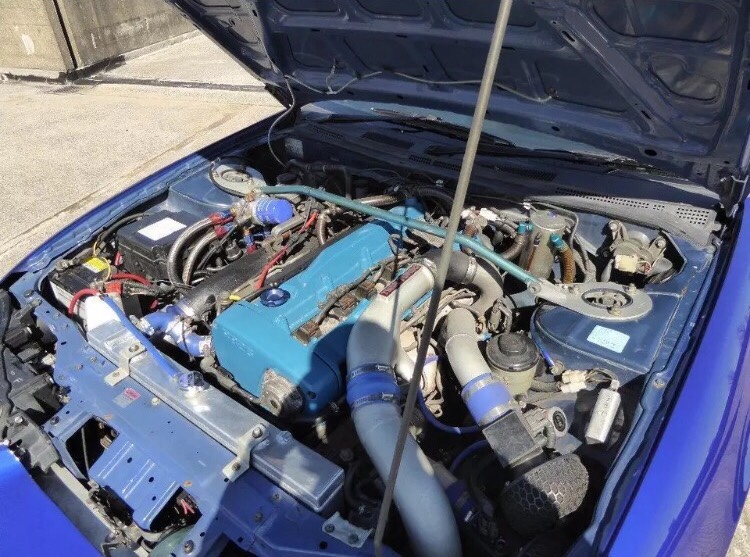 Here's a little spec of what it had when I purchased it:
Rb26dett conversion carried out in Japan with rb25 gearbox
Aftermarket 2 way diff (unsure of make but very aggressive)
Twin plate clutch
Apexi coilovers
Custom 3.5" exhaust (I think rear half is titanium) with remote silencer
Front mount
HKS air filters with custom pipework
Oil cooler
Oil filter relocation
Defi gauges with controller (oil temp, oil pressure, water temp and boost pressure)
Ur style body kit
There was probably more but I will make an up to date list later.

I was over the moon with my purchase, loved the Rb noise driving home. She was needing a little tidy up in places but the bodywork was good so that was a bonus and the shell only had 36k kilometres on it! Couple more photos after her first wash. 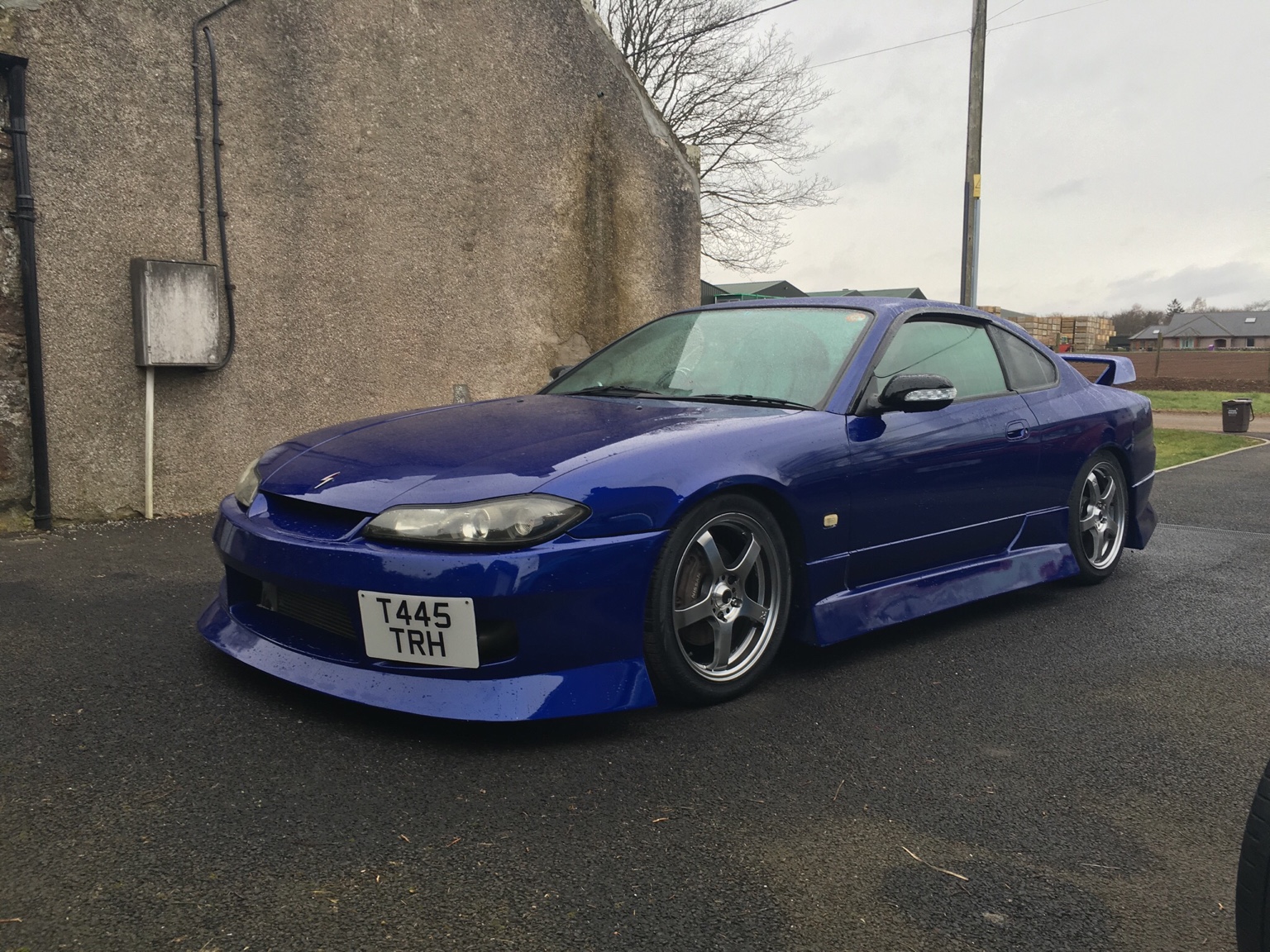 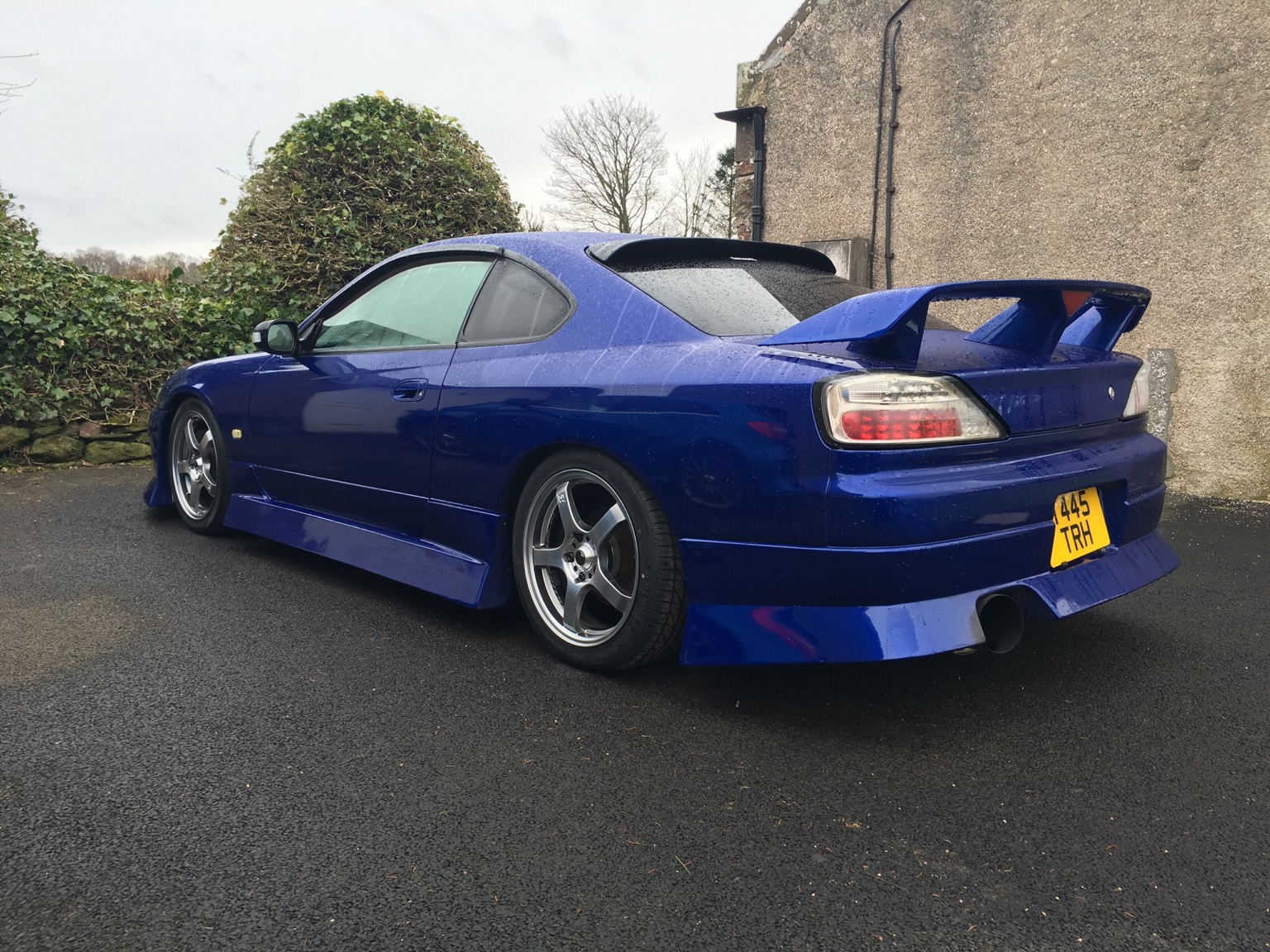 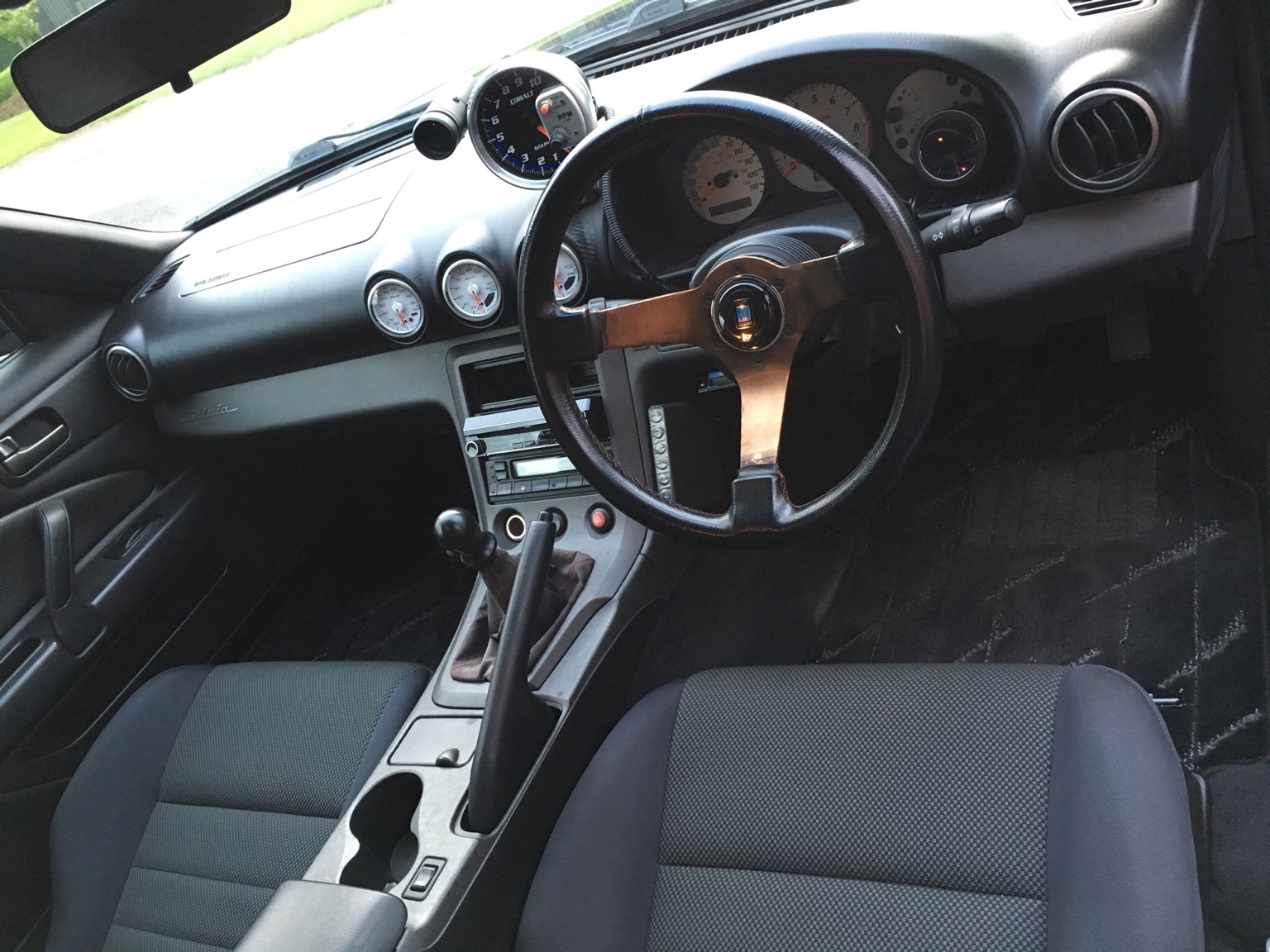 Two days after owning it my mate said he had a set of wheels I could try on my car since they were too wide for his S13, they are Panasport G7 c5c2 wheels 17"x8.5" on the front and 17x10.5" on the back. They sat perfect on the back and needed 20mm spacers on the front to clear my brakes. 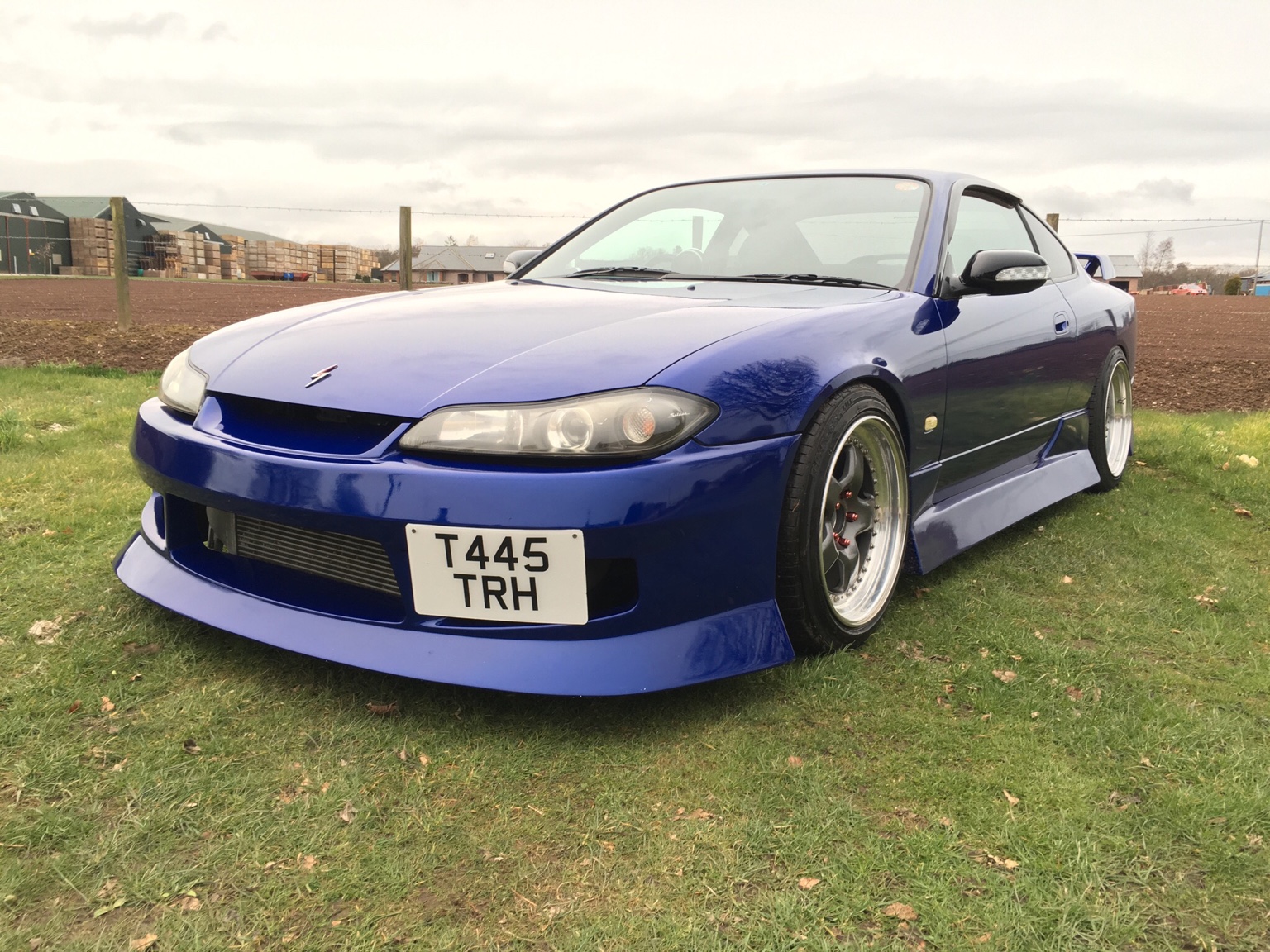 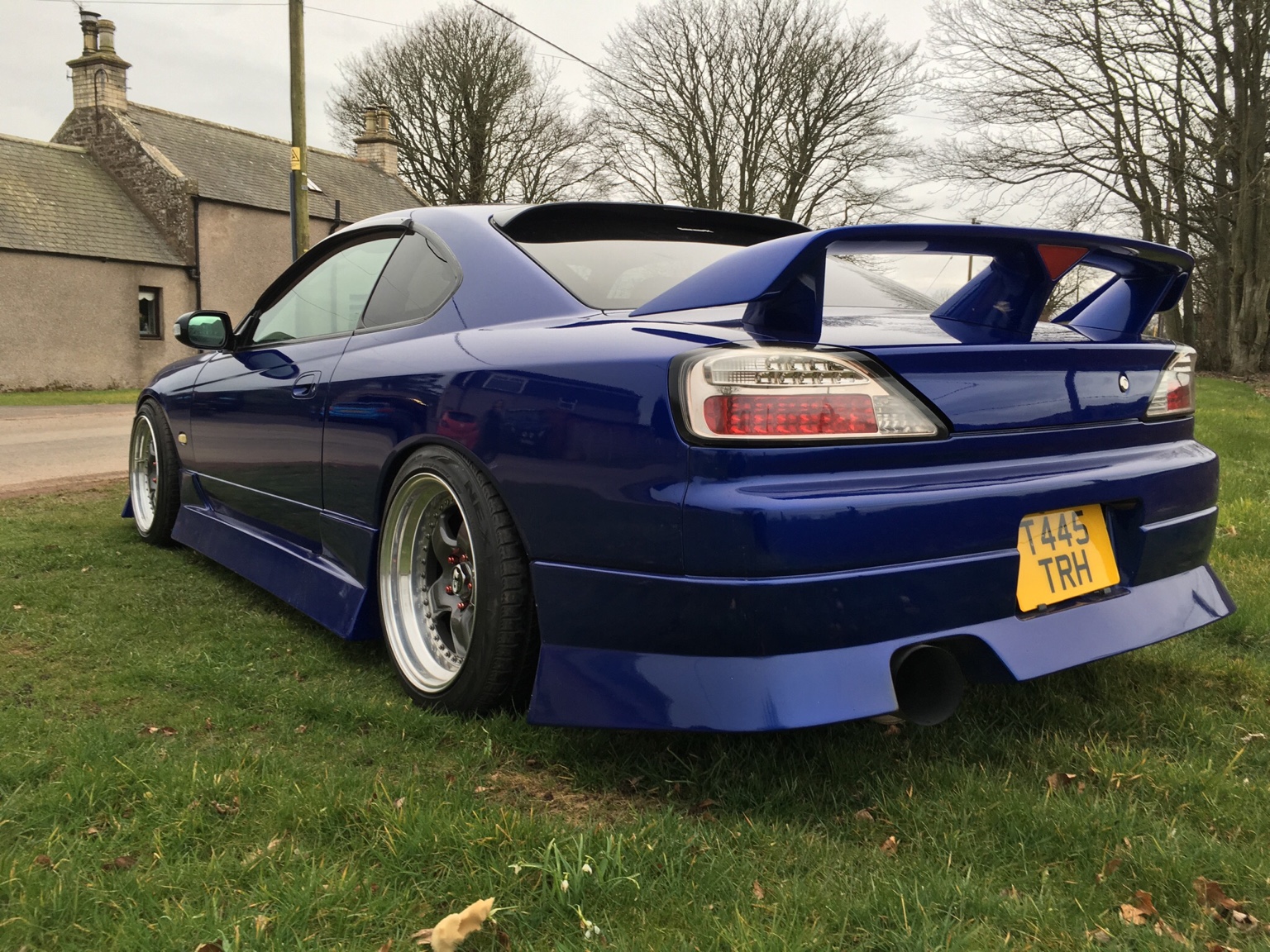 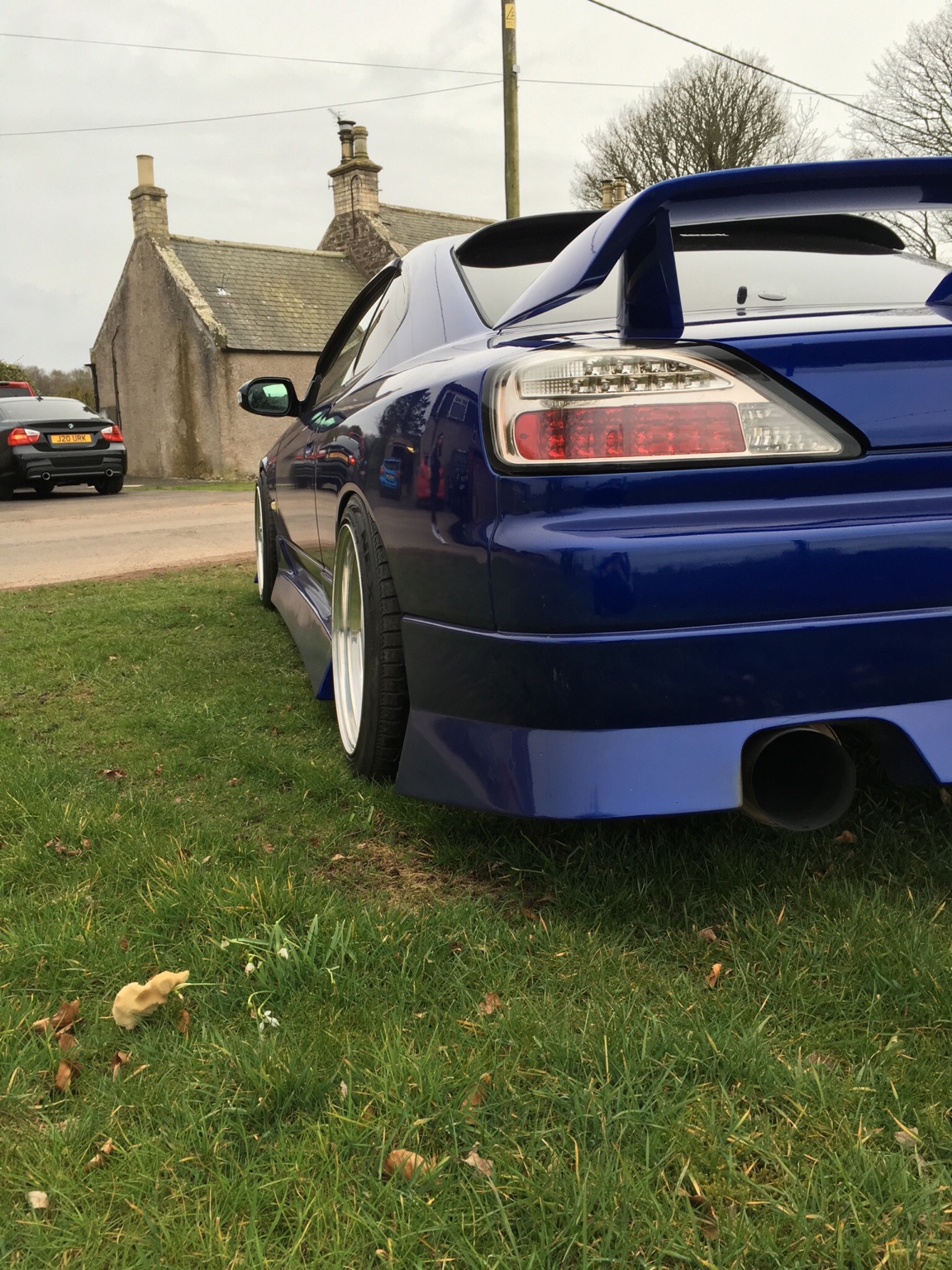 About a month passed and she developed an intermittent electrical problem which caused her to cut out. After changing various sensors, new coilpacks, coilpack harness and plugs it turned out to be a loose wire on the ecu! Such a simple fix for a really big headache. Ever since that she's been nothing but good to me.

Took her to a show at Crail earlier in the year and won one of their "top 5 in show" awards. Here's a couple photos from that show. 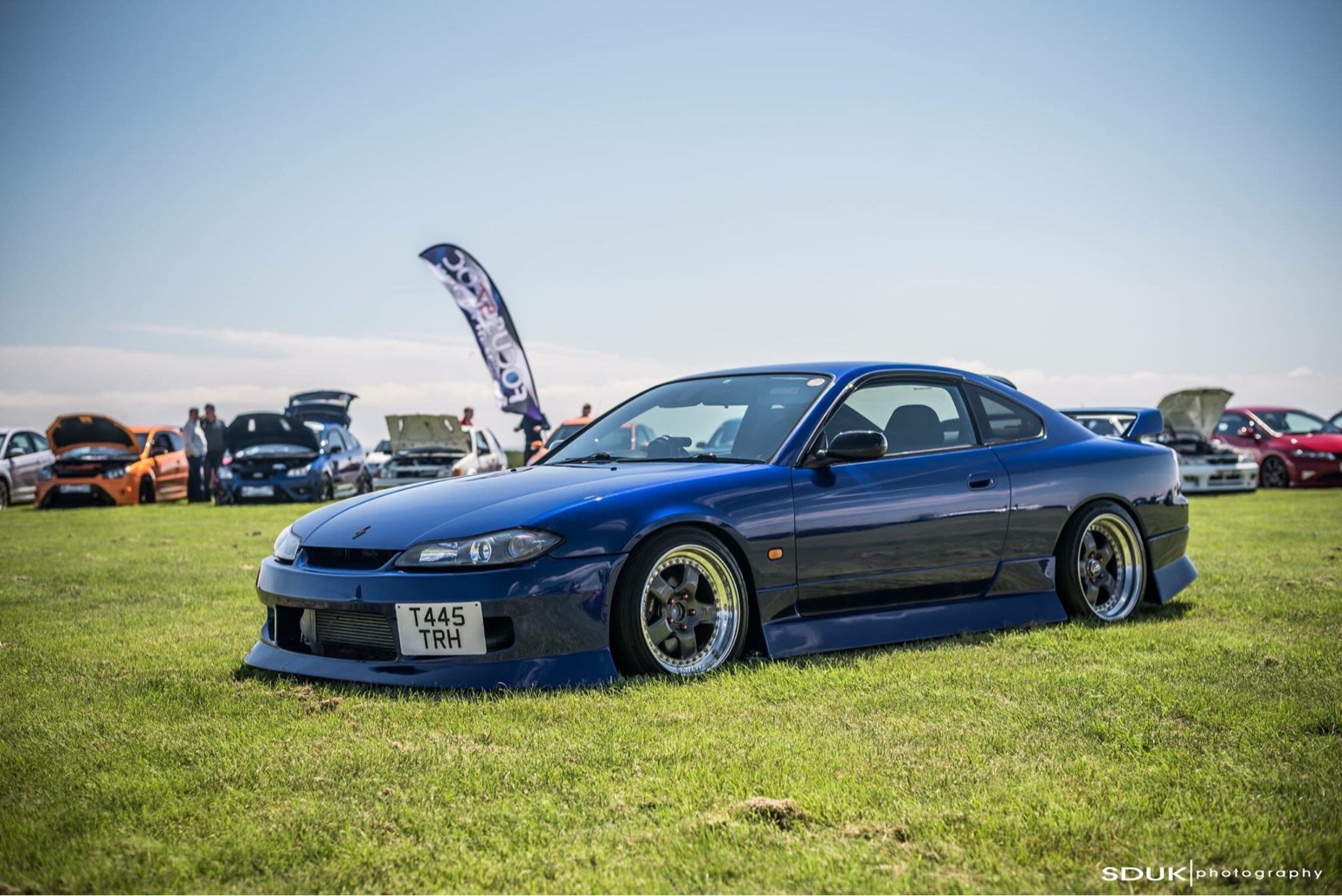 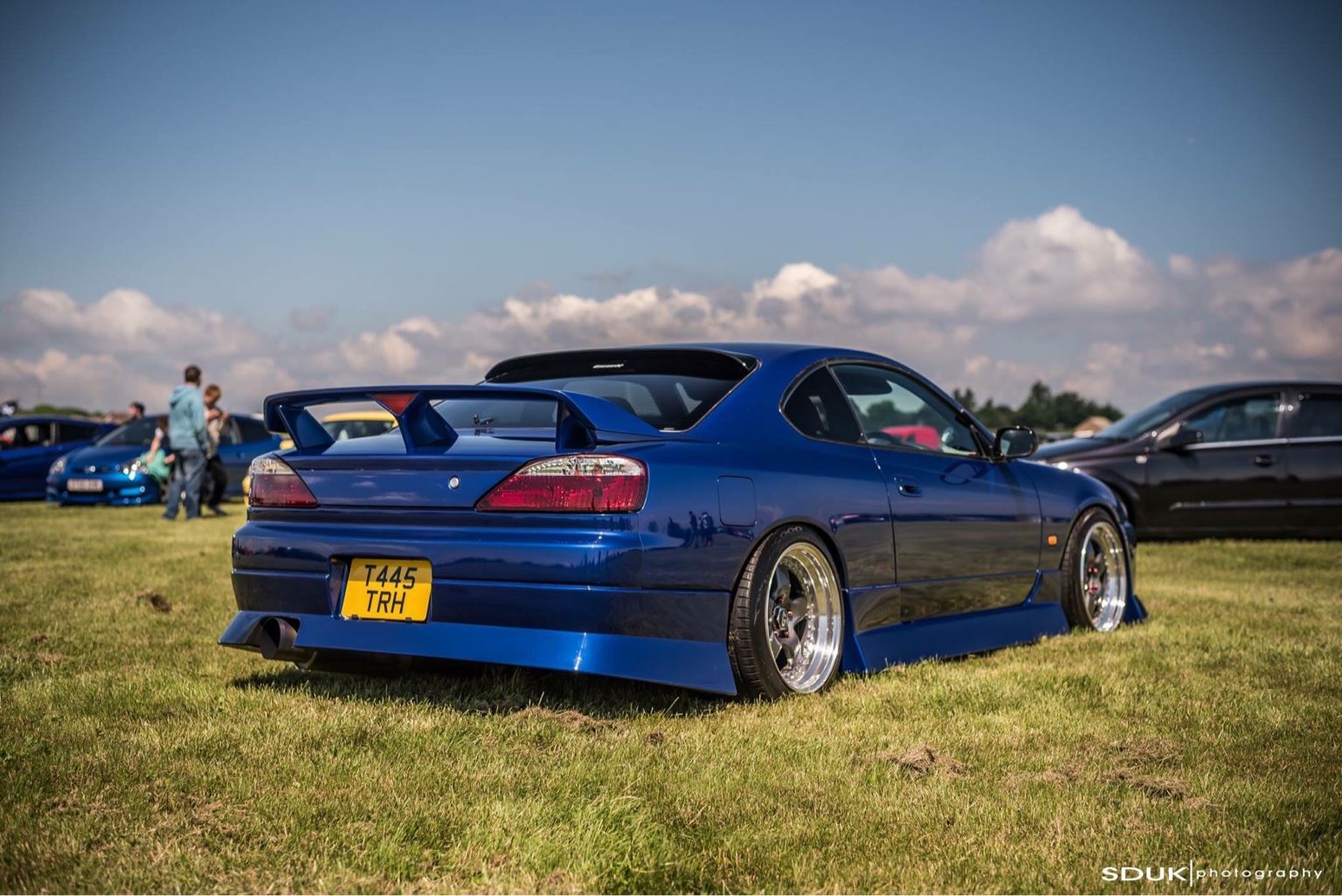 I then started to tidy up the engine bay since it didn't really match up to the exterior. I started by giving it a good clean and painting the cam covers, coil pack cover and cam cover crackle black. Bought some conduit and covered up some of the wiring since it was all just cable tied together. Then replaced some of the hoses for blue silicone ones, it's still ongoing but the bay looks loads better now! 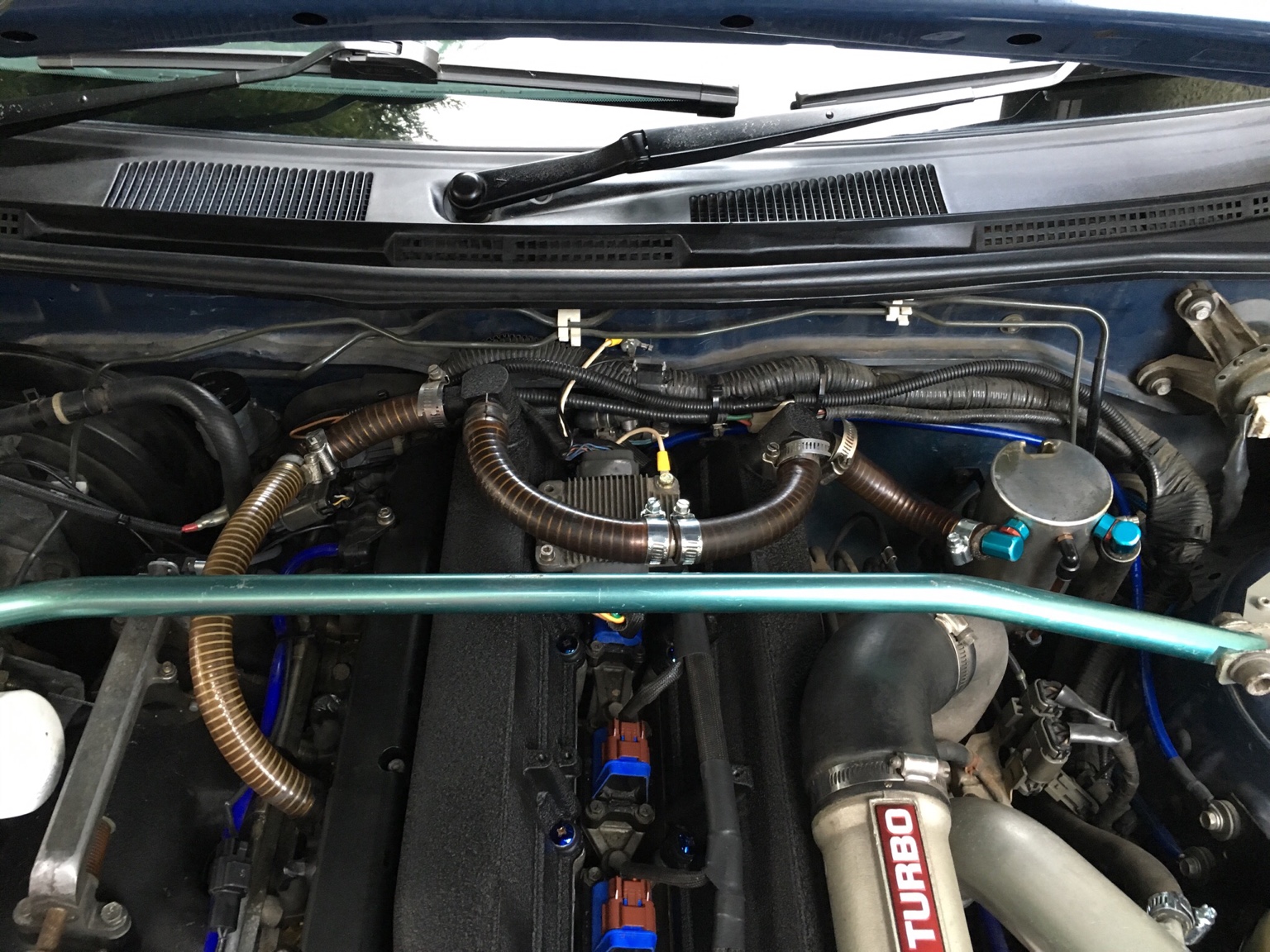 I then found a full leather interior from a S14 for £125 and it was only 20 miles from me! I couldn't pass up on that bargain, I picked them up, cleaned them as they had been sitting about for a while and fitted them into my car. 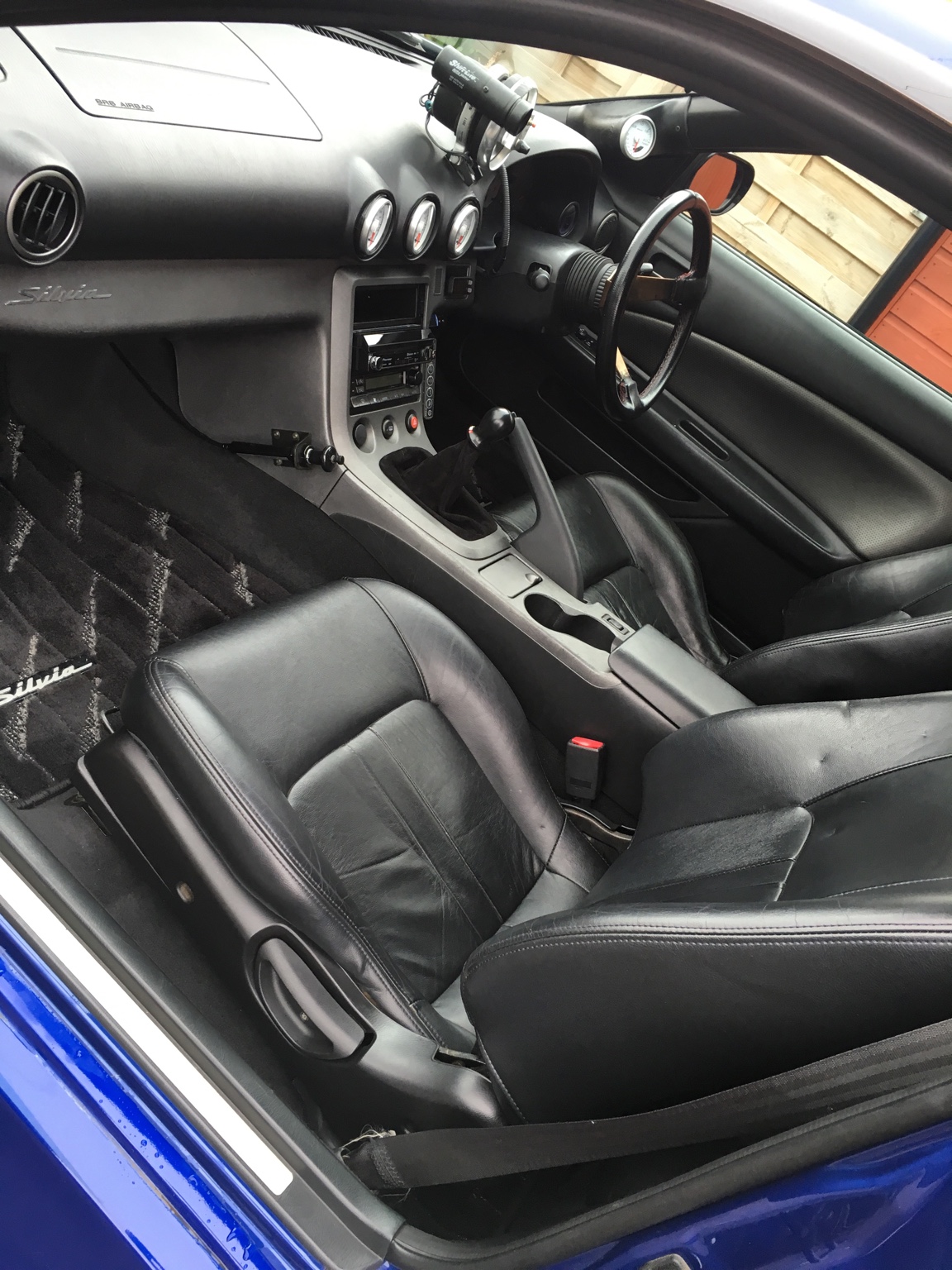 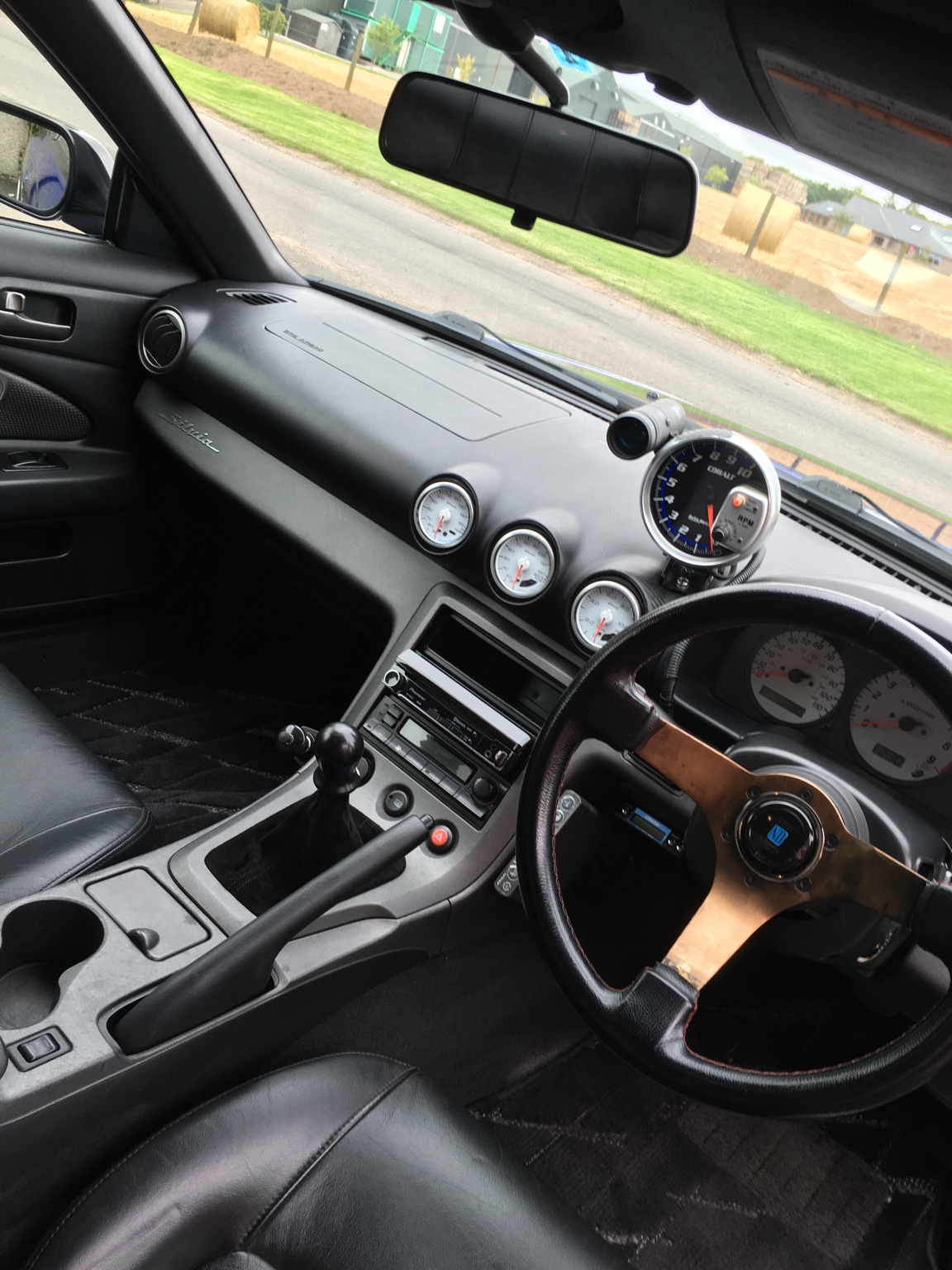 A couple months back I attended a rolling road day with Tf renegade at HQ Garage. I got a good check of health and made 284bhp and 309ftlbs torque at the wheels so I was happy enough with that....for now

a photo of my car on the rolling road and next to my mates S13 who was also there. 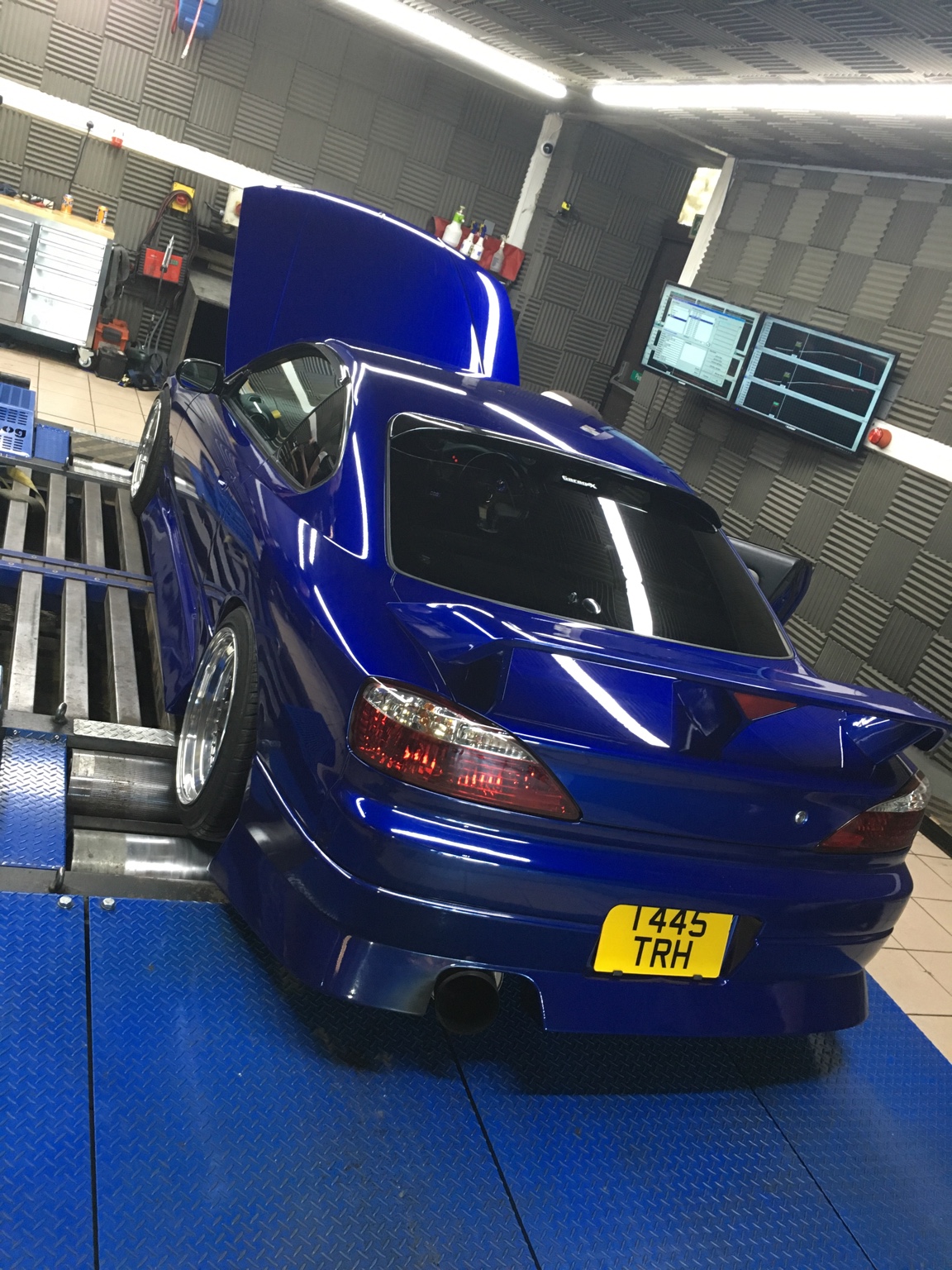 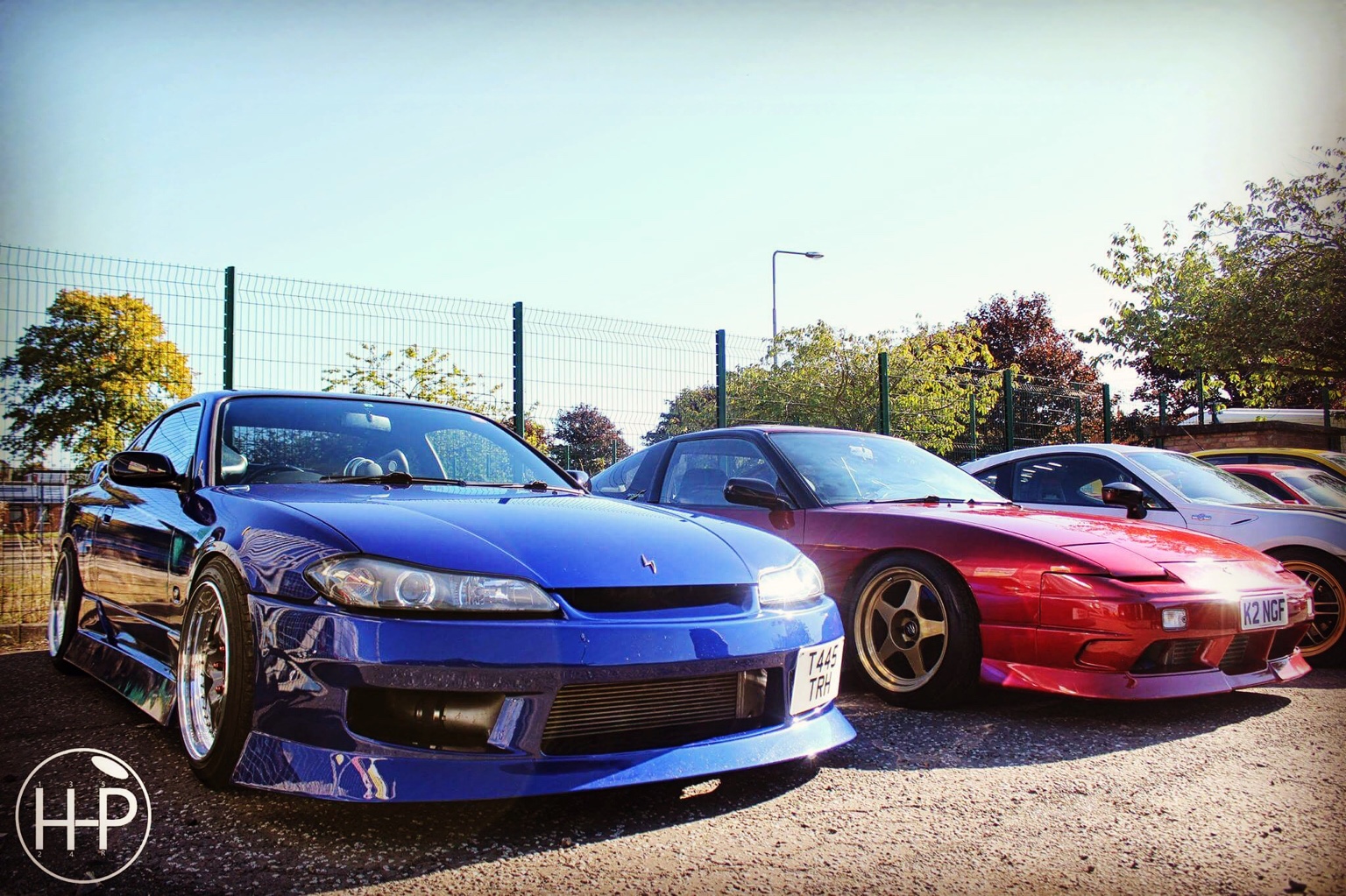 I look forward to meeting some of you at Japfest next year! Hopefully we can get a good selection of cars together

a lot of people think that 17's are too small but I think they suit it, you've got to have as much dish as possible too haha

Epic I had no idea you'd done so much since you'd had it.

Super cool tho buddy can't wait to hit some Scottish shows together!

Thanks mate. Aye I've done more but it's not worth posting up. I've been buying more parts so I will update this as they arrive and get fitted.

Yeah it'll be good to get the pair of them together at some shows next year! 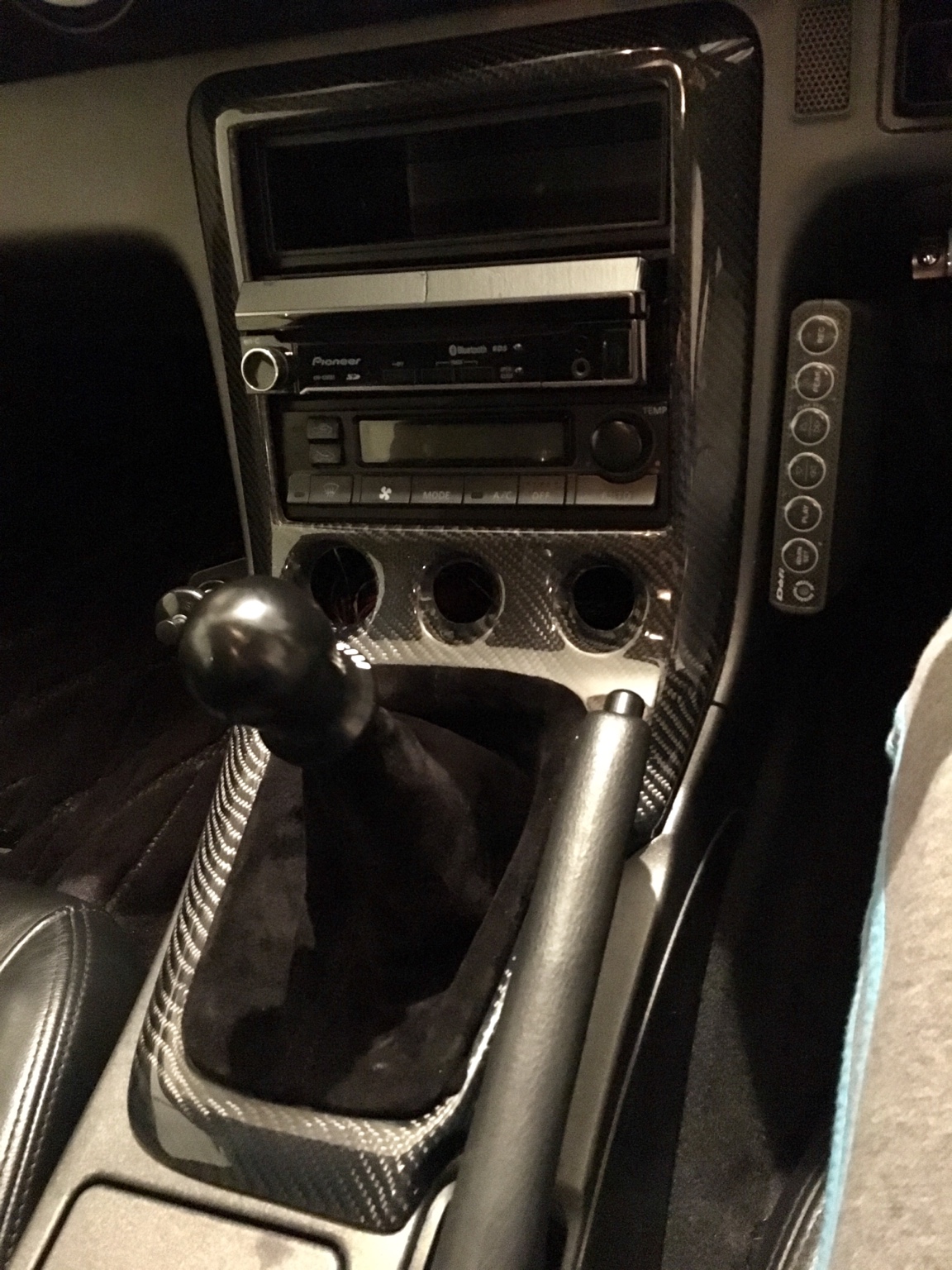 Test fitted my carbon surround the other day, can't wait to get it fitted properly!

I also purchased this: 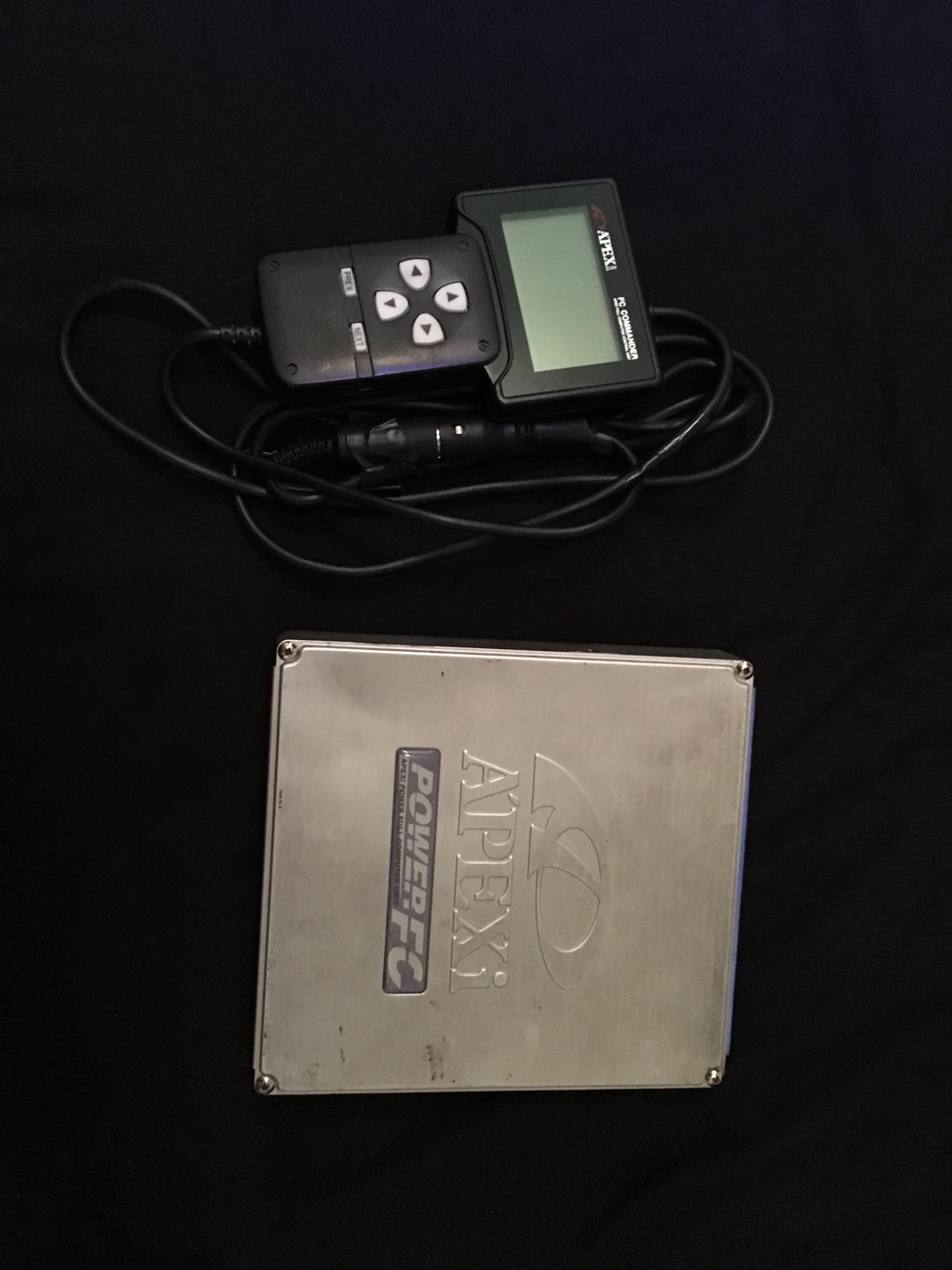 Always good to see other RB S15s running around out there. I daily one and my local shop is doing an RB25 swap into a Spec S that we'll start working on tomorrow, but engine swaps are actually pretty rare over here. Enjoy it and keep it running, prices of RB26 engines have gone way up!

Thanks, I do enjoy driving her every time I take her out! I thought that engine swaps would've been the done thing over in Japan. The RB engine is the one Nissan should have fitted in the S15 from factory haha have they? I will be keeping a hold of mine for a few years. I was reading through your build and you've done a good job on yours

Not much to update as she's tucked away for winter but found these pics on my phone. 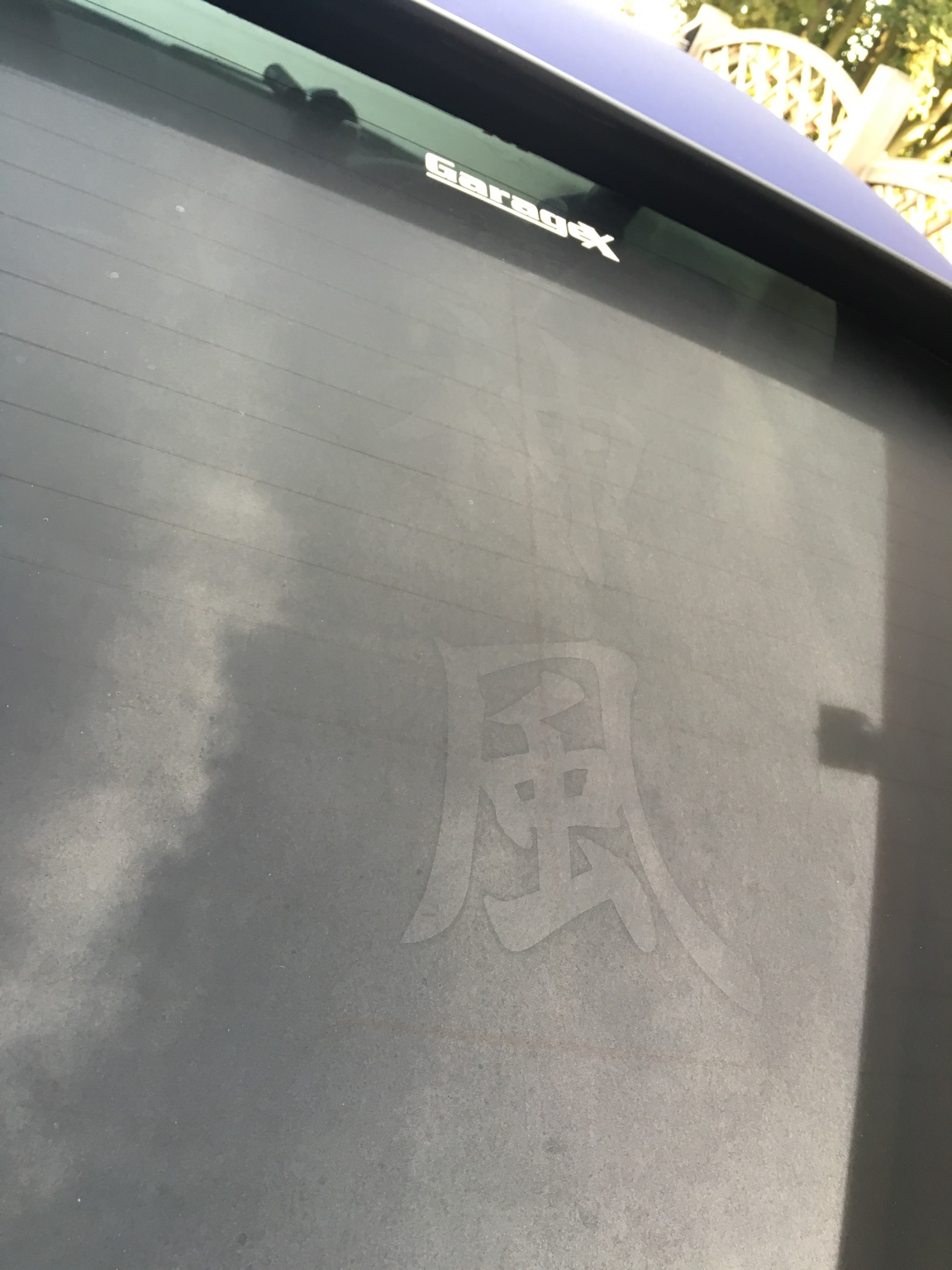 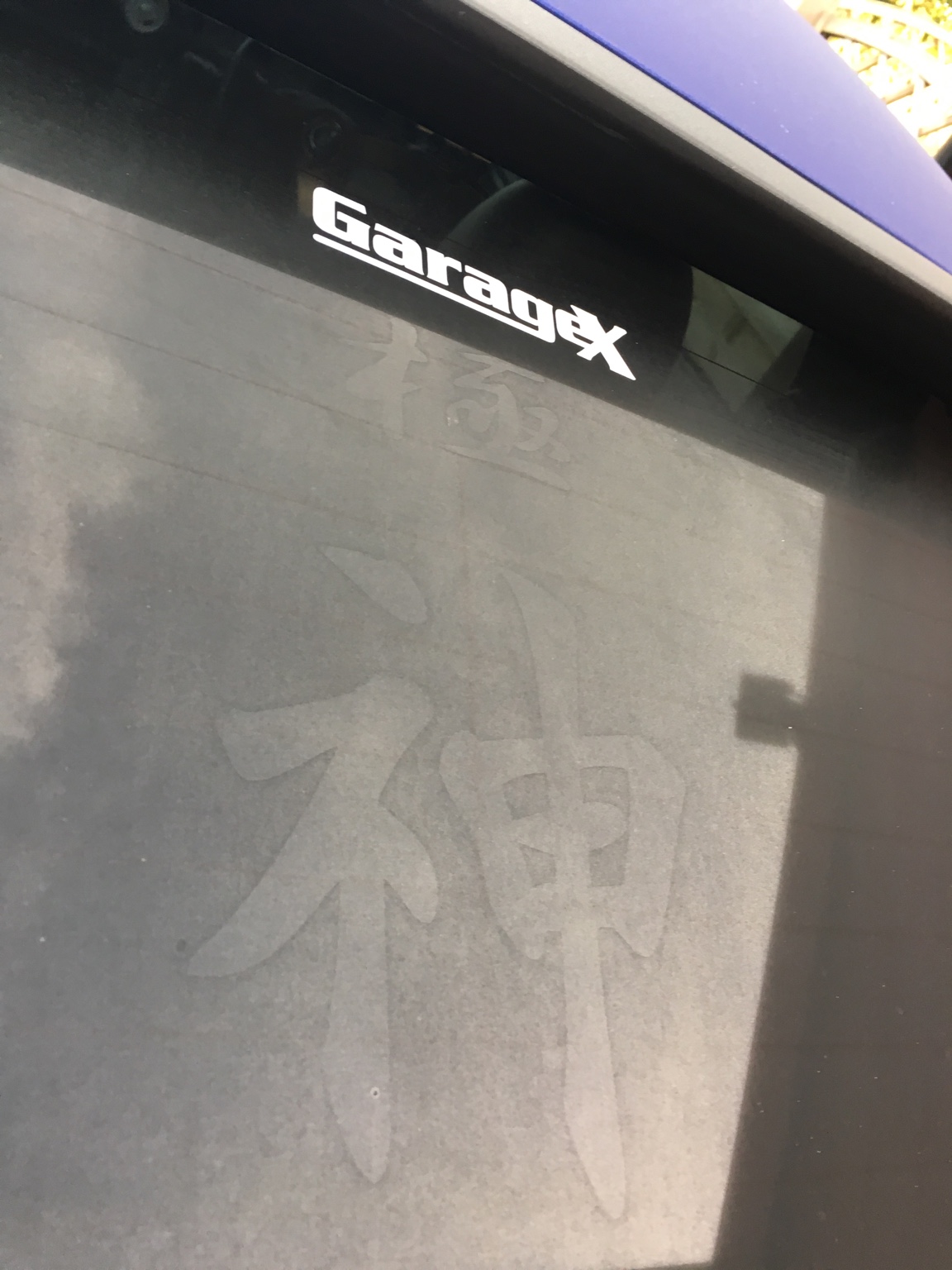 It only appears on cold days though, I wonder what it says.

Thanks for checking my build thread! I should say road-going engine swaps are rare in Japan; you see them in drift and on track but it's a pain to get an MOT in order to drive them on the street. The car's official model designation has to be changed on its registration. Even after completing all of the necessary paperwork to register the modifications I still failed inspection because my exhaust was 2 cm too low and we had to modify the pipe and try again! The RB definitely changes the Silvia into more of a GT car, kind of like a more modern 240Z 2+2 I think.

No bother, as soon as I seen it had an rb in it I had to read it. Wow that does sound very strict if they picked up on that small thing! It certainly does.

No way, thank you for the translation! I've been wondering what it said for a while I always thought it was maybe some sponsors if it was a drift car but that is even better

I thought it said side order of chips

Keifer1903 said:
I thought it said side order of chips

I've got a pile of parts built up over winter to fit to her once I get her out of hibernation so watch this space for more updates. 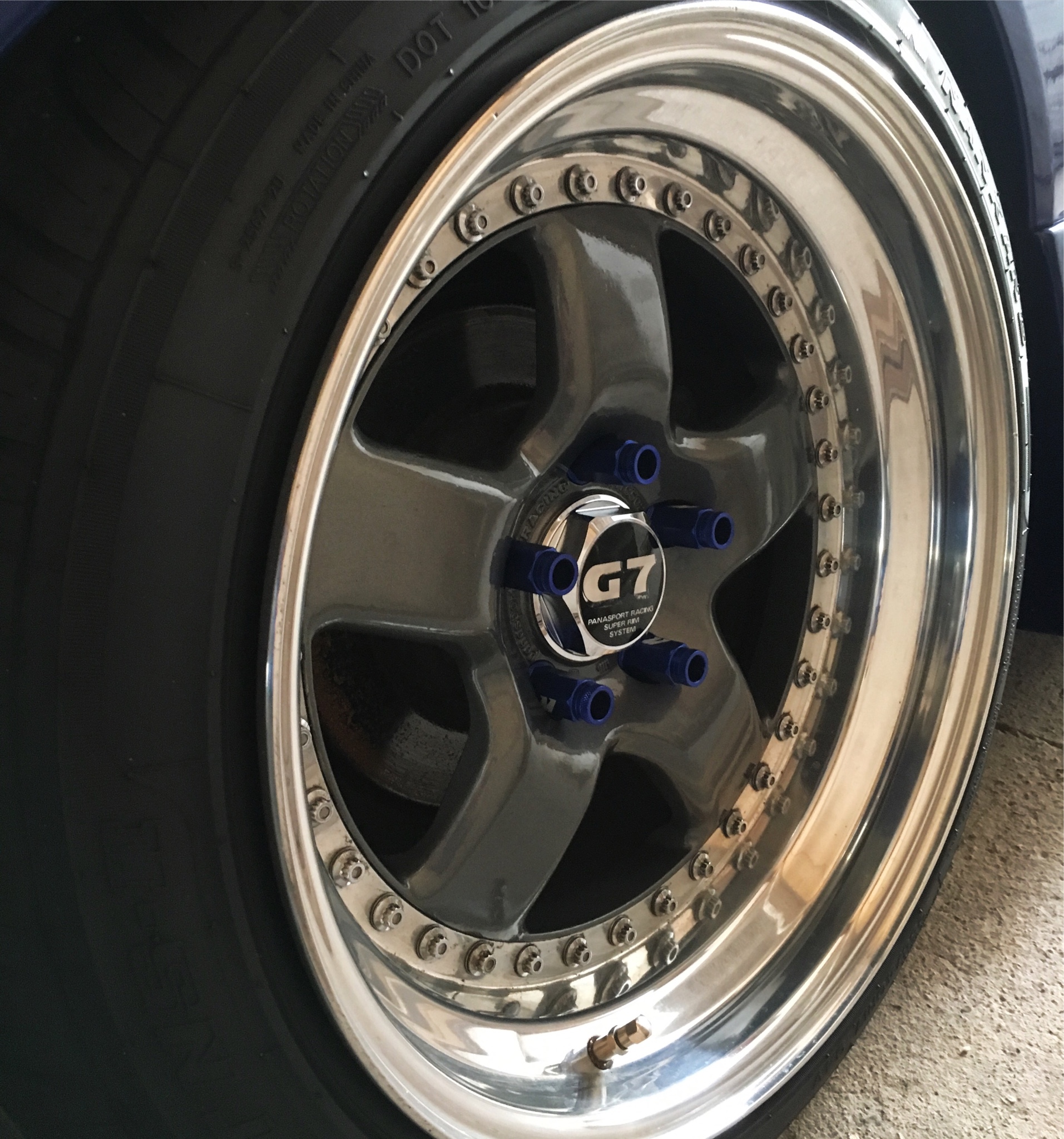 Some Japanese packaging that the centre caps came in. 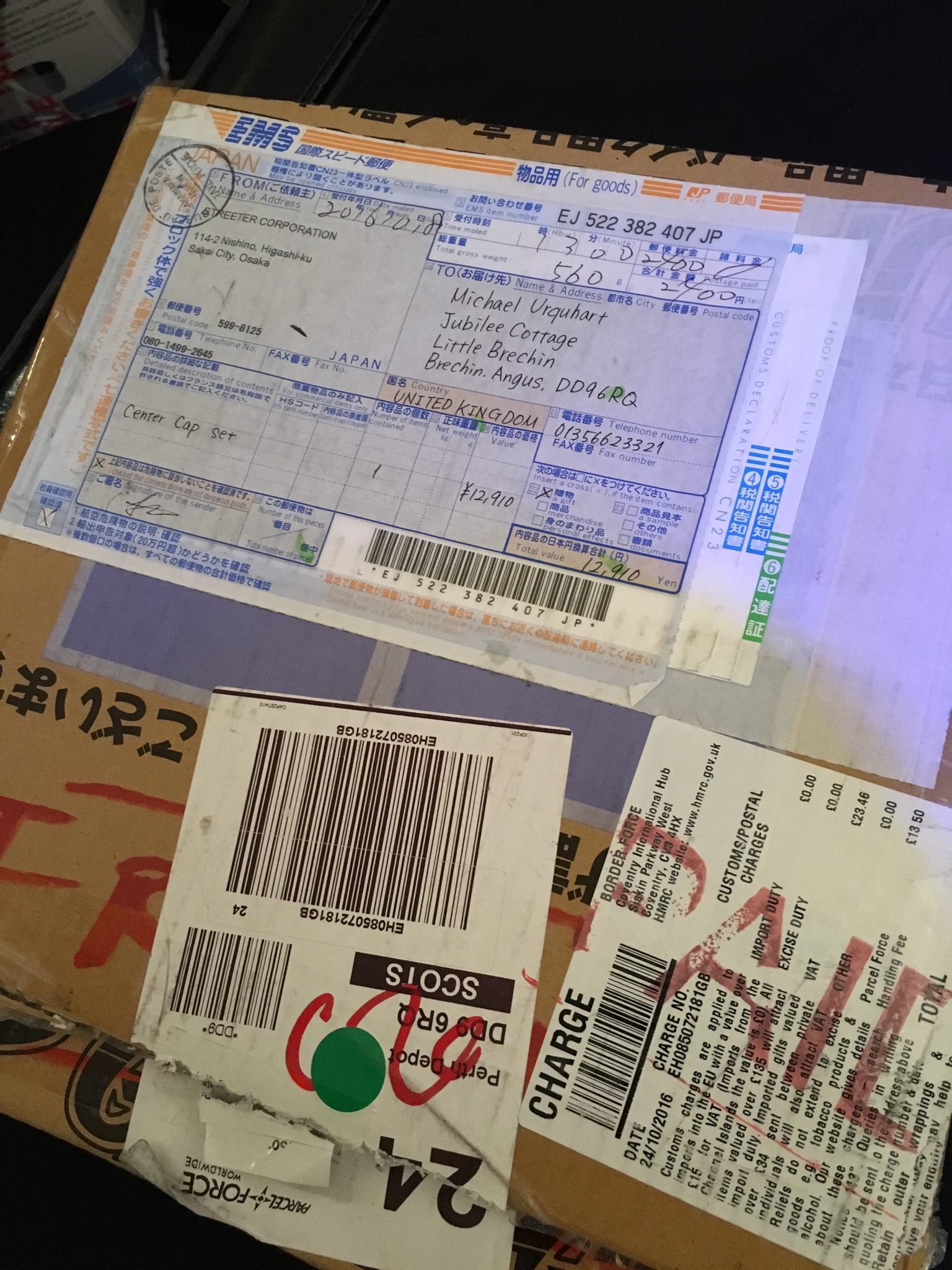 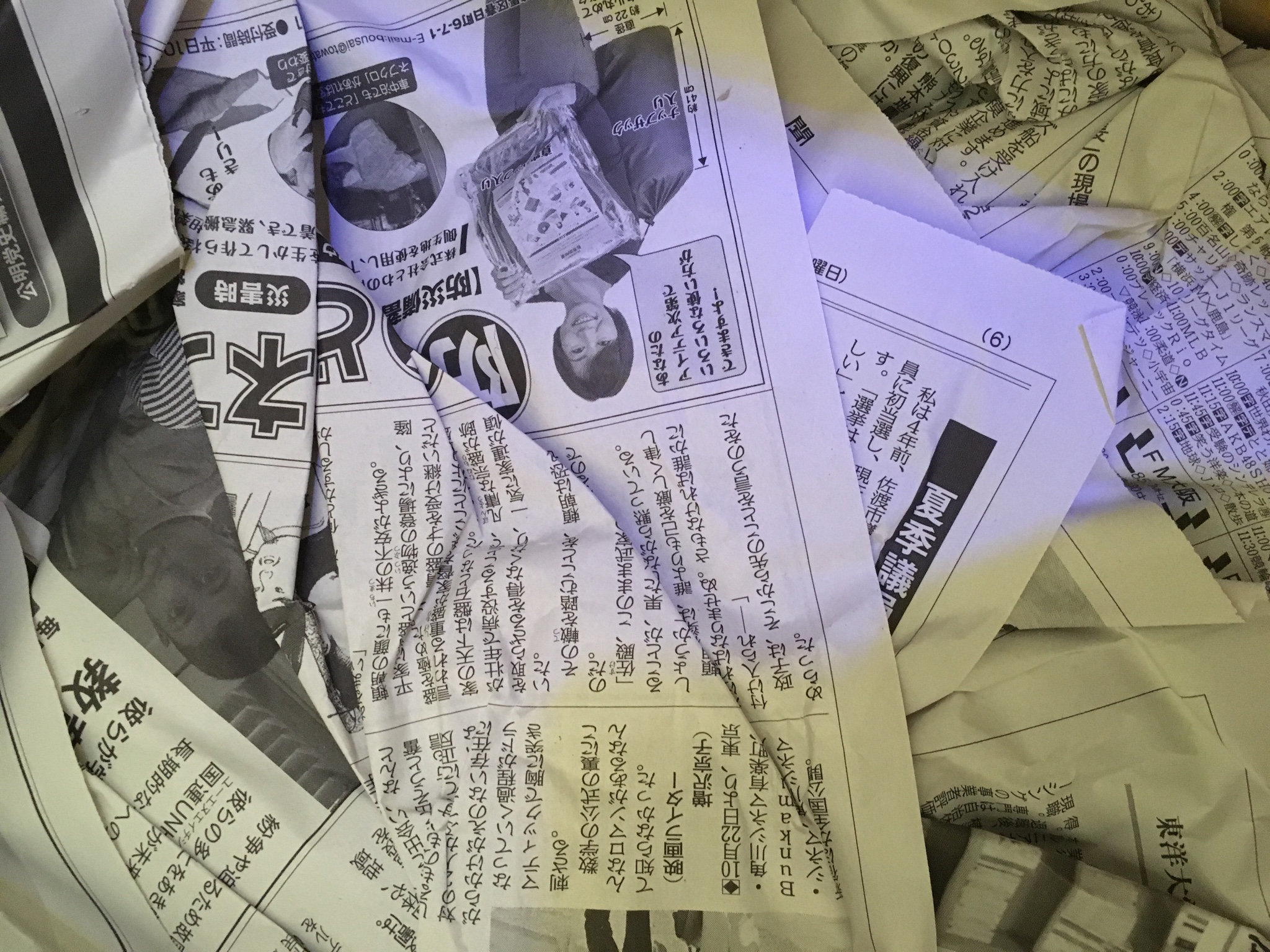 Hopefully get some more work done to the car soon so I can give you some proper updates.

That's the first show of the year out of the way. Was at a charity event at Driftland yesterday and got 3rd place at the show and shine! 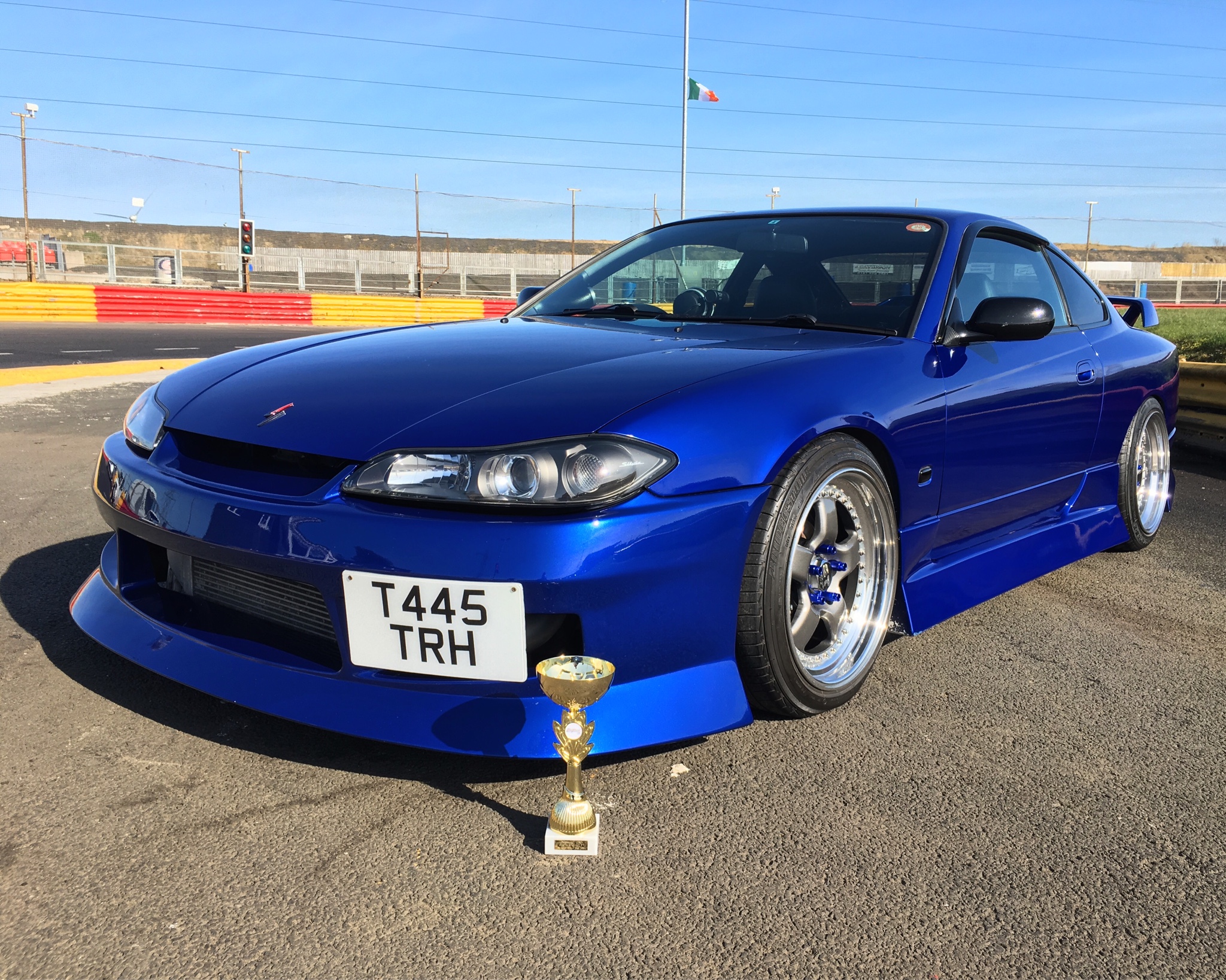 Forgot how much fun it was to drive her