Right, I'm working on getting my graphics sorted now. I had come up with a design before I even picked the car up (too keen!) but sizing it up against the car it just didn't look quite right.

Here's the design as they first started with the intention of having it on the passenger side, driver side and the bottom one on the bootlid -

Putting it up against the car I had to bin the background swirls as they didn't follow the lines at all. Also removed the pop art/dot type graphic as that made things looks too cluttered. I then added some 'ribbon' style options to extend the graphic out a bit and a seletion of circle graphics to fill in the gaps. The starburst also looked wrong so working on a circle type background for the logo. Current work in progress is as follows (it's a naff 'chop', vinyl will be trimmed off against wheel arches, windows, etc.)

I need to sort out the colours, the lightest grey will be silver glass etch, middle one silver and darker one smoked silver. Black will be satin black and the red and white will both be reflective, as will other colours added in. I've got some other logos I'm going to add in, such as HKS, Tein, Nismo, PIAA, etc. plus some other Jap specific logos such as the one seen under the door mirror (a jap telecoms company) and I have others like Asahi and Rakuten which would also look quite good popped on. There'll also be stuff on the bonnet and tailgate too

Anyone have any other thoughts or ideas?
Last edited: 11 April 2009

Thanks for the input mate. It's my own design as I do this for a living too

Which bit are you less keen on? Once I've got the other logos and such added in it'll 'tone down' some of the 'floral' aspect. Just working on getting the visual balance of it right as it's a touch tricky getting the main logo in without it having too much cut out by the handle and rear part of the side skirt.

I'll do the fitting myself and do normally trim when on the car - using a very sharp knife, very gently and tkaing my time. Have done that a few times and not had any problems and not left anything that couldn't be polished out.

Have amended the design slightly. Adjusted the black ribbon parts a touch to flow better from front to back, removed some of the floral swirl by the central circle graphic and added a few more logos - including the S15OC url

Think I may need a few more logos, or at least a larger logo, directly over the rear wheel to fill that gap and keep the main 'weight' of the graphic in the right place.

personally , i like manga and jap styled images , but i think you a bit too much swirling going on. the main logo loots cool tho.

i would put all the logos on the back quarter either, too big ... make small ones and put em along the side skirt, think that may look better.

Aye, still not convinced with the logos on it. What I might do is save the logos for the bonnet, can have them running down vertically towards the passenger side with the main chunk of design coming down towards the drver side. Saves any issues with italic style logos too as they can look great on one side, naff on the other
D

Graphics :hurl:ur going to really make a F### OF UR CAR.

The graphics are really cool, not my cup of tea on the car though! but good luck, post up pics of the final product!!!

i dont like too many stickers but i think it will look a look better more plan and simple without the whirls...

I have tried the design without the swirls just leaving the ribbons and circles, but it looked too empty and the proportions were wrong. I am contemplating making the swirls a little less intricate though, slightly more simple without the double outline, which would simplify things a bit

Hunts > Here's the pic of the car as it stands, and also my logo which I do need to incorparate quite prominently within the design, seeing as the car is acting as a show car for my business

Okay, have removed the logos and altered the design of the swirls so they're a bit less cluttered and a wider spread for a better line with those of the car. Also ditched it being an outline and gone back to a solid colour as that helped reduce the amount of clutter too. Colour of the lighter circles will be silver, swirls will be smoked silver, ribbons and outlines black with the red and white both in reflective. 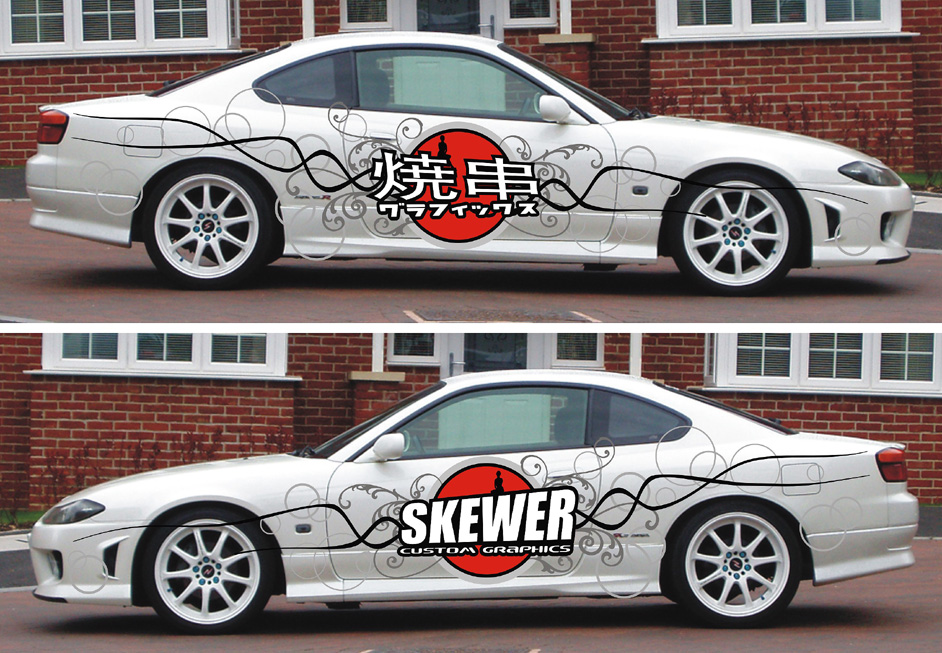 Are you the same mook that was/is on the celica forum with the grey st185 with ghost castrol graphips?
Allways liked the way that car looked.

I am indeed mate, still got Rufus tucked up in the garage awaiting funds to get mot/tax/iinsurance and put it back on the road. Decided to make this one a bit more 'obvious' on the graphics - lots of people said they like the Celica, but it never got any pictures in the mags when at shows, I'm hoping the above will be a bit more eye catching

Oooh, oooh, making progress now, and getting a little excited too *lol*

Have got the passenger side logo and circles on now, had to finish up as it was going dark and getting cold! Took a couple of pics once the main logo was in place, can see the reflective nature in the second one really well. Proper chuffed with how it's coming together

Hopefully the weather will be okay tomorrow, then I can complete the passenger side, take some pics, and make a start on the driver side. Here's the pics so far - 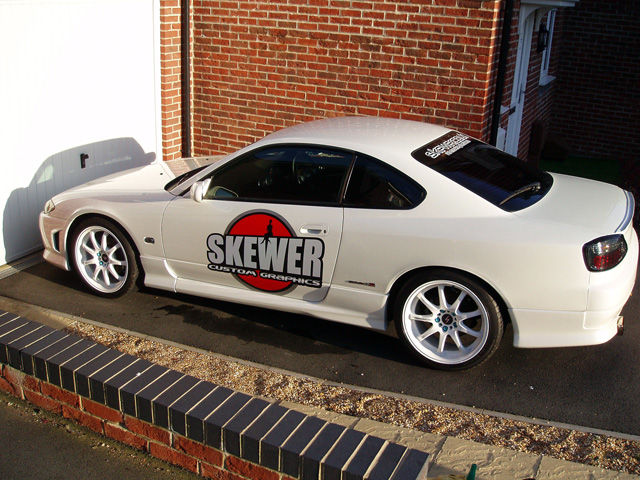 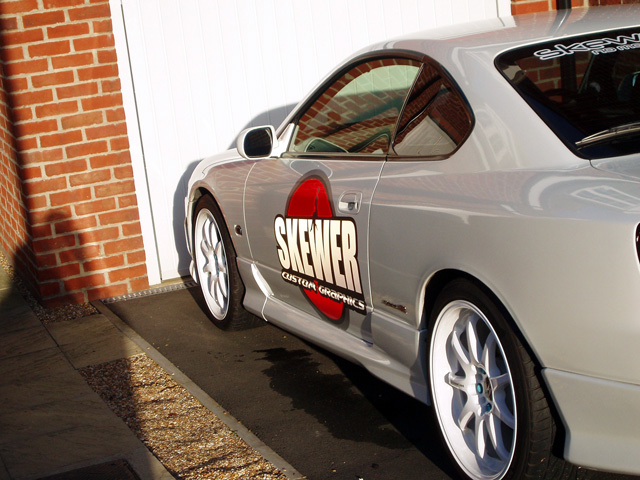 Made a little more progress today, despite unfreindly weather. Passenger side is complete and I've also sorted out what I'm going to put on the bootlid/tailgate and bonnet, coming together

man that must have taking you ages ....

It has indeed taken a while, and doing it in the cold and wet didn't help

Now at last the sun has come out to coincide with me finishing off the sides and taking some more shots, justice

Looking pretty good now, though still got more to do before it's finished. I'm contemplating not bothering with the bonnet now, it could easily detract from the sides, which isn't the plan. However, if I do that, I will add a few more smaller circles over the front wings and edge of bonnet to tie it in and make sure it doesn't look like it's been forgotton.

Design for the boot/tailgate is complete, which will include s15.com and sxoc.co.uk urls. Just needs seperating out and cutting so hopefully get that done over the weekend 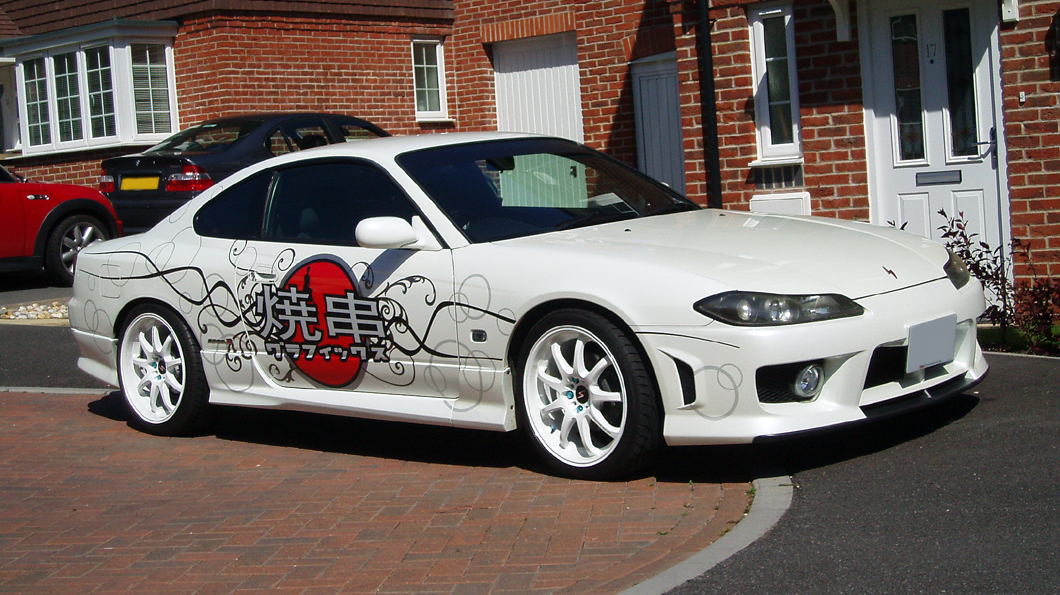 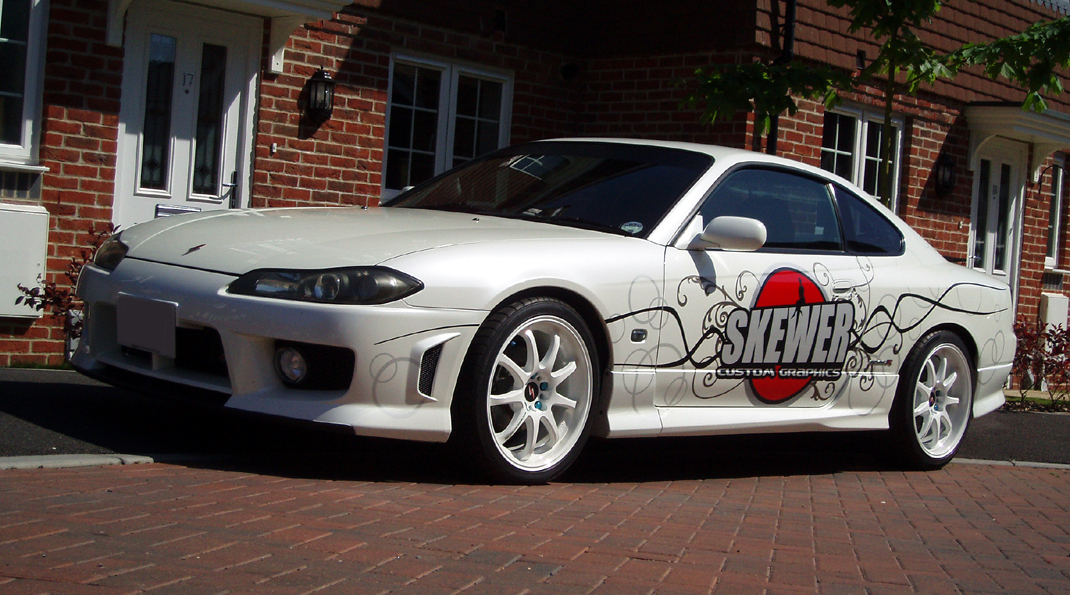