Right, build thread time. This is my second spec S with an sr20det swap (same colour and similar body kit too. Creepy). I had to get rid of the last one because I ruined the engine and was in a tricky situation of needing to move cities about 3 times in the upcoming months (I'm in the RNZAF. Just to clear things up) so I didn't have a chance to hold onto it and fix it. This is my new baby and this will be my log of mods basically. My priorities for this build are as follows:

I advise anyone thinking of modding ANY vehicle to follow these priorities. If you screw up the order, you'll likely have to go back and fix things you missed or pay for it in loss of life, limbs or money. Do it.

Of course, I don't actually speak from experience because not only is this project/build to make something awesome, it's to prove to myself that I can do these sorts of things on my own. I've never changed a cars oil. Ever. That's how little knowledge I have. The only thing on my side is my meticulous researching abilities so I've got a lot planned out in my head.

Anyway, to the pictures... 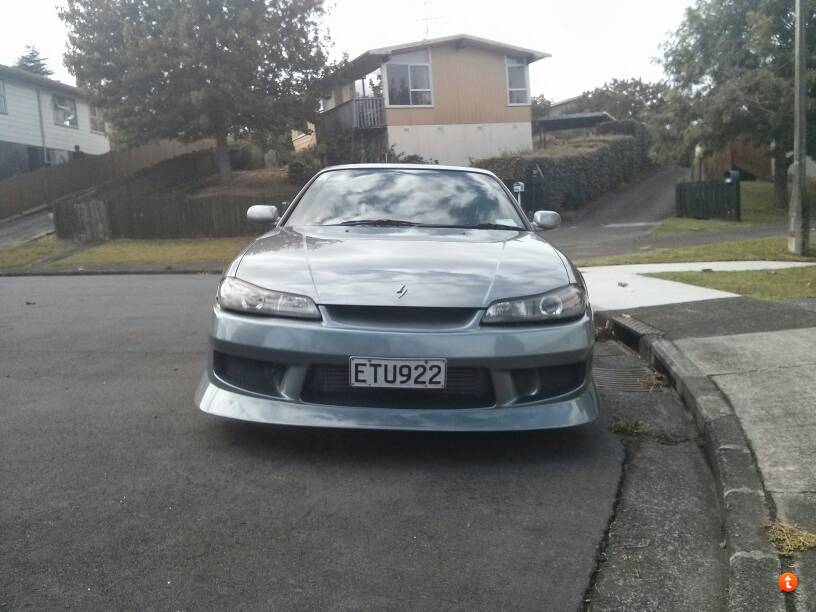 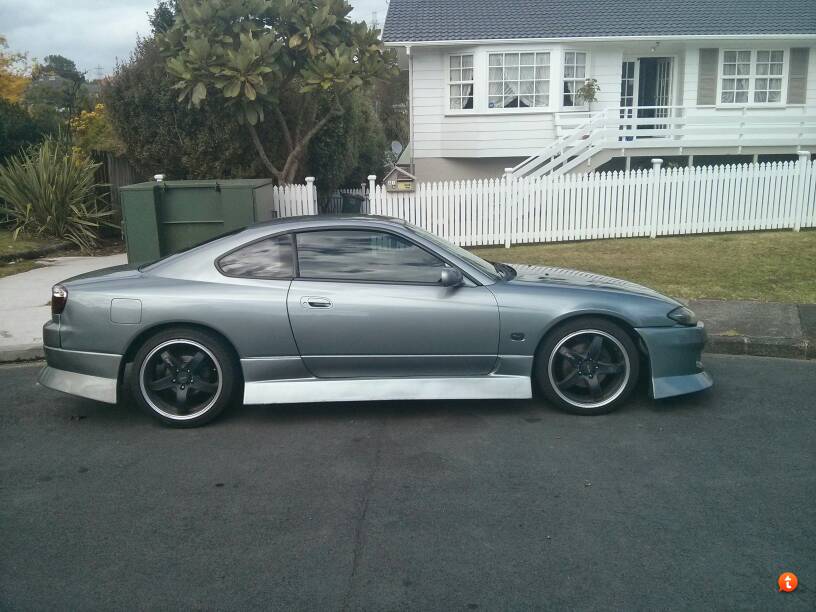 Things I bought it with:
- Sr20det (with no engineering certification. Knob)
- Ugly wheels
- Window tints (legal. Plus points)
- Body kit (unknown. Cheap fibreglass one but I like it)
- Hid headlights (kits are illegal here so they've been thrown out)
- 3 inch, I think, catback
- de-cat pipe (nice surprise)
- FMIC
- A disgusting black roof spoiler that was obviously glued on by a 3 year old. I'm still picking bits of silicon sealer off the rear window
- lowering springs

Things I've done so far before making this thread:
- New speakers all around
- Tidied up and thrown out a few things under the hood
- Ripped out all the carpet in the boot to get ready for battery relocation. And weight saving.
- Taillights
- Ripped off rear wiper
- Debadged all around (except the bonnet)
- tinted side indicators
- A-pillar gauge mount fitted (no gauge though yet. Looks stupid without one)
- Walbro in-tank fuel pump
- Moonface Gearknob


Subscribe to this mofo and keep up with the progress. Ask questions too (after I've done stuff) because I'm happy to let people learn from my mistakes.

Oh yea and drop advice on things you see wrong too. I'd hate to screw things up
Last edited: 22 August 2014

Looking forward to this, I think that kit is the vertex kit, those side skirts were what mine came with- too modded look for my taste as went with the factory aero. Brakes should be real easy as I've just done my fronts to r34 calipers with braided lines and they're a direct swap. Although you will have to drill the caliper mounts to hold an m14 if you're using 34 brakes as they changed bolt sizes from m12 to 14. I believe all other skyline brakes are still m12 though

Should be fine. I've got full R33 rear set (including handbrake assembly and cables. Good ol' research came in handy) and will be getting R32 set up front. Just got a BM50 BMC from a Spec R to put in and GKTECH braided lines (skyline type) too. All I need is a hand from my mate and the use of his jack and axle stands.

IMPORTANT: point 1 of my priority list will save you money. No less than 30 minutes after I posted this I got pulled over by the cops for no WOF (Warrant of Fitness). Once again - knob. I now have 14 days (I think) to fix it AND get a cert AND get a WOF. Might be possible but I'm tossing up just paying the fine. Luckily I was in uniform on my way to work, sometimes the cops are a bit nicer to us
Last edited: 26 March 2014

I'd say that's a URAS kit the skirts have too much flare to be a vertex. Maybe a Vertex rear bumper...

You haven't lived yet...

Ha. I'll get there one day.

I just had a mad rush to get the brakes sorted. I'll be doing them with a mate next week. Anyone got any hints on the handbrake assembly part? From the looks of it we'll have to take the rear hubs off

Is a uras kit same as I had on mine

gotta say I love how it looks these kits look class! Makes me miss my front bumper a little.... Nice little project dude

Yea I like it. The front bumpers got a tear and quite a few spiderweb cracks around the mounting points so I'll need to get a full refurb one day. Or just a whole new bumper
Last edited: 27 March 2014

RNZAF aye........ how long have you been in there, if its over 7 years did you know two guys Mosh & Pele ? both load masters on hercs

Lol yup. Nah only about 3 and a half years. Don't know any loadies unfortunubly. The cop that pulled me over the other day was like "do you know jonesy on 6 sqn?" too haha. I should've just said "Yea mate"

Brakes are on! Unfortunately due to injury and lack of tools I had to resort to taking it to a shop. But brakes would have been a bit of a massive job for a first timer so I'm not too worried. Parts used:

The best part about the brakes is they don't squeak! It used to sound horrendous in reverse and have a constant little squeak going forward. Oh yea, and once warm, these babies STOP. like really stop. I accidentally locked up the fronts doing a quick check from a gentle pace which would never happen on stocks.

Ugh that wheel gap makes me cringe. Cosmetics are well down the list though.

I also installed a gktech eccentric throttle wheel. It does nothing. It looks prettier in the engine bay though so I'll leave it there but I honestly can't feel a difference. Plus it required a lot of filing down to fit because apparently I have an s14 zenki engine which unusually has a 2mm wider bolt for the throttle wheel.
Last edited: 14 April 2014

Youll need all that braking with those Firenza tyres...

Auss15 said:
Youll need all that braking with those Firenza tyres...
Click to expand...

Bit by bit. I can't afford to upgrade everything at once

the brake upgrade is a must or all silvia's, its night and day difference once you do it and wonder why you didnt do it right away. what tools were you missing?? 32mm hub nut and breaker bar? hub puller?

spoonman said:
the brake upgrade is a must or all silvia's, its night and day difference once you do it and wonder why you didnt do it right away. what tools were you missing?? 32mm hub nut and breaker bar? hub puller?
Click to expand...

Sooner? I did it pretty damn asap.
Basically all of the above.

He still has to do an oil change, so don't rush him

Auss15 said:
He still has to do an oil change, so don't rush him
Click to expand...

I've just got stitches out. And I'm about to go overseas so I'm just taking it as it comes

Get Spoonman to do it for you while your on holidays...he's a nice guy.....