I had the all the sensors fitted up, and could see the info on the link display, and I had changed the stock boost gauge for a Defi BF one.

Originally I was going to put them in the air vents, but after much trying I gave up on trying to remove them without smashing them to bits, so I came up with a new idea.

The glove box! They are nice and stealthy in there, as I can just shut the lid to hide them from view, and there's enough space left to put a few cd's or other stuff in, so the glove box isn't completely useless.

Anyway, I've took a few (crappy) pics to show it off 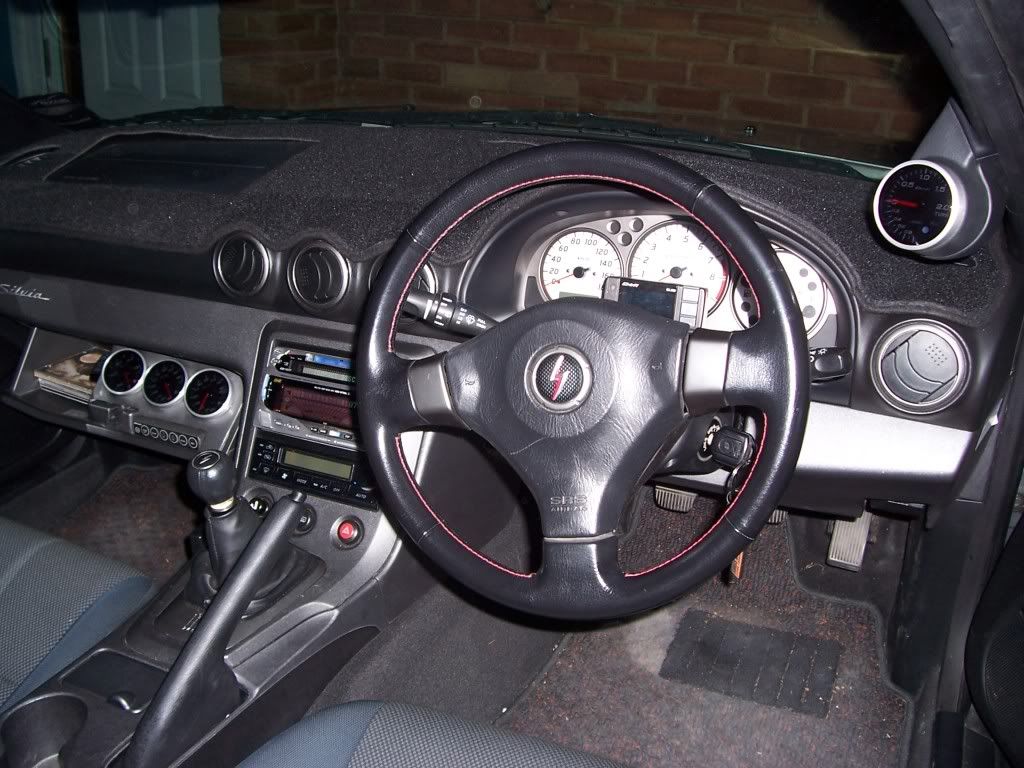 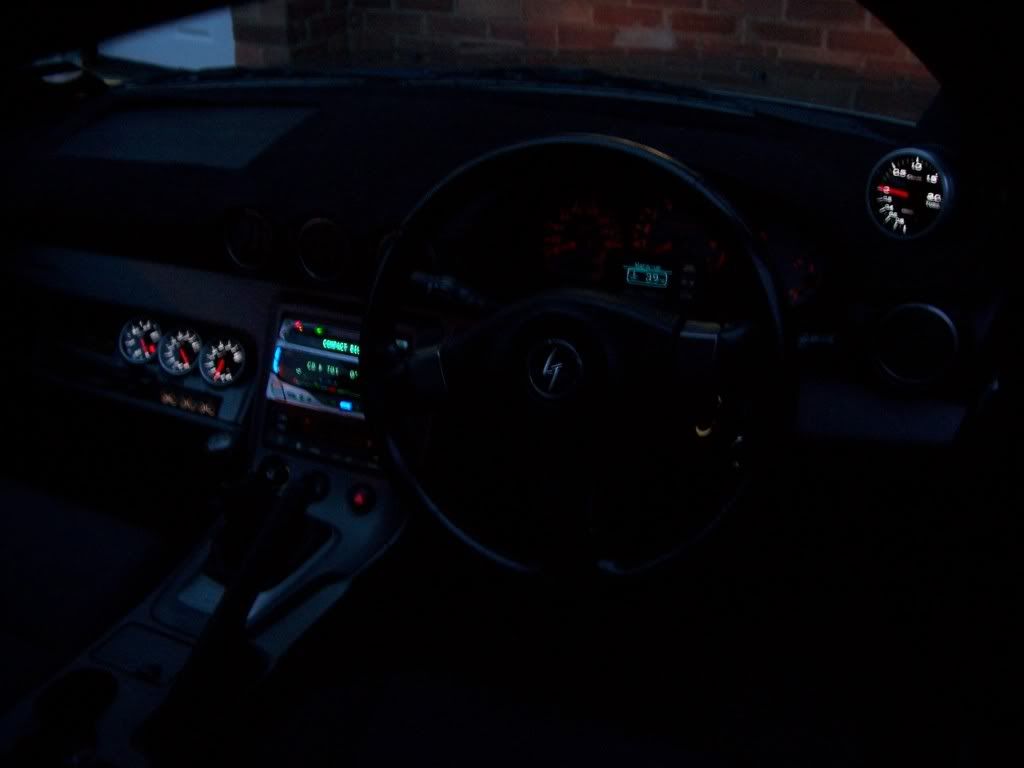 And a closer shot of it. 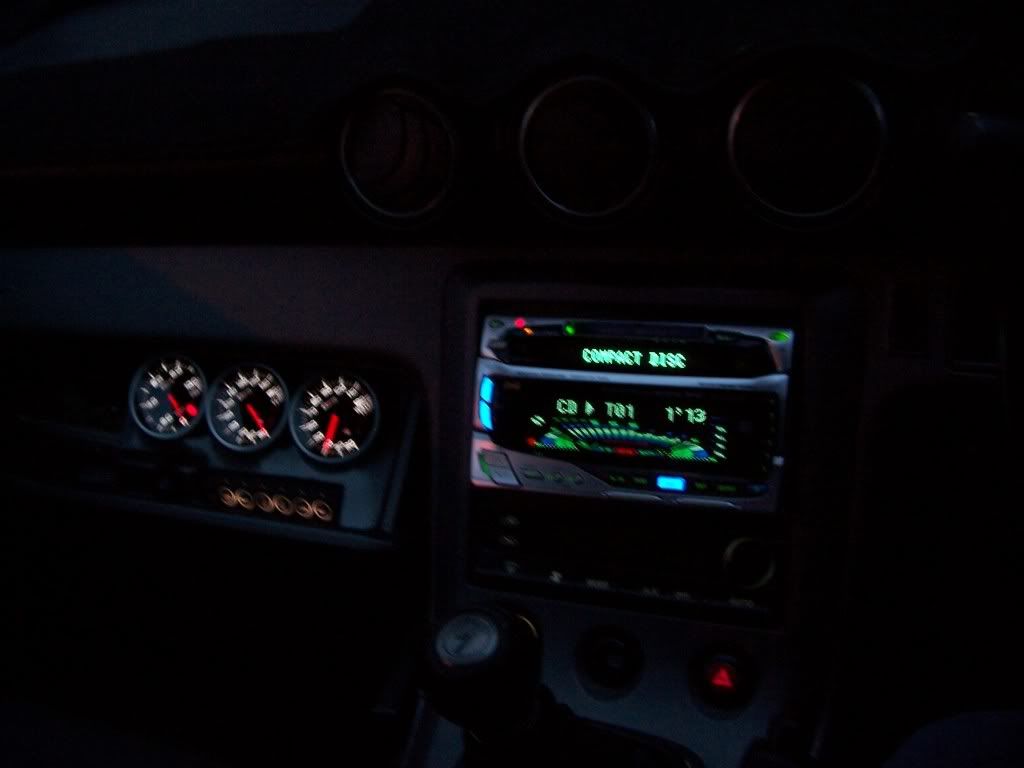 I've sprayed it Rover steel grey to try and match the colour scheme of the rest of the trim. I don't think it will be that much more out of the way to look at than if it was fitted in the vents, and in some ways it's better, as I've angled them towards the driver for a clearer view of them, and I can still get the nice cool airflow from the vents in the summer!

What do peeps think of it

Also, do other people's rear demister switch illuminate, as I just noticed in the pic that mine doesn't.
C

Good work Dan Defi's are one of the next things on my list too. I also used Rover Steel Grey to touch up my centre console and the match was perfect.

I cant wait I should get mine next week All I really want to get now is the Link Display and the inside of my car will look like a xmas tree :wack:
Défi Link Controller II
VSD-X
Exhaust Gas Temperature
Fuel Pressure
Oil Pressure
Oil Temperature
Water Temperature
Turbo Pressure

Thats loads! where are you planning on fitting them all?

I've just got the essentials, boost, water temp, oil temp, and oil pressure. The link display is good, as it's got a warm up sequence that you can set the temperature on, and it lets you know when it reaches it

I was planning
Turbo - where the stock one is
Oil Pres, Temp and Fuel Pres in the 3 Air Vents
and Exhaust & Water on each side of where the bulge in the dash is with the VSD in the centre showing on the windscreen cant wait for next year lol
just need to win the lottory now lol
C

Yeah, I saw you had bought all of them from a bloke on SXOC. I'm going to get the advance ones - may aswell if I'm buying them new. Just going for water temp, oil temp and oil pressure displayed on the link meter and one gauge (boost) to replace the original. Even this very simple setup is going to cost a small fortune Worth it though!

Got water temp and oil temp as the main two showing on Link Display unit which are the most essential data required when using on track/drift/fast road etc...

Oil pressure is plugged in and will kick out warning if it drops below 0.8 x1000 kPa (same as bar lol??) and boost is on seperate BF 60mm gauge next to Link Display cos I wasn't happy turning my head over more to look at boost reading haha :wack: 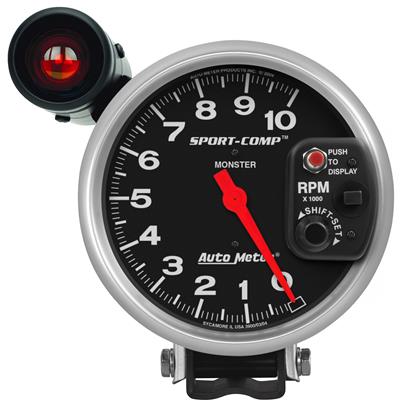 Dude I have a auto gauge one for sale thats kinda like that for £15 if you want it all you need is the shift light to mount on it?

AllanOrr said:
Dude I have a auto gauge one for sale thats kinda like that for £15 if you want it all you need is the shift light to mount on it?
Click to expand...

Cheers dude - would have been interested if it wasn't for my OCD on making sure my instrument dials and stuff are the best in quality lol. Because I use my car so much throughout the year at track/drift events I need to get summat that's rugged and accurate which is why I'm being a brand whore in this particular case and sticking to Autometer. I won't even get the cheaper non Sport/Pro Comp series even though they are by the same company because when I called a dealer, he said the non Sport/Pro Comp are made in China and are not as robust as the Sport/Pro Comp series :wack: Thanks for the offer tho! :thumbs:

Yeah I ain't too fussed on most things being branded and more expensive etc but for some reason Bride seats and Defi/Autometer gauges are the only ones I'd consider... lol

Question, where did you get that gauge pod holder for the glovebox?

I made it myself out of hardboard, bits of ice cream tub, and car body filler

I have like twelve defi gauges home now, really two sets but the colours are not what I am after. I removed the set from my ER34 GTT as I am installing the GTR MFD in it and may just run the BF Boost and EGT setup. I also have a second BF Boost and EGT that I am installing on the S15 A-pillar, my plan is to take two S15 a-pillar pod setups and make one. My original plan was to install the balance of my gauges in the air bag area but I have now decided to keep the airbag setup and I don't want to install them in the A/C vents even though it looks cool but over here is way too hot, so I am selling the 60mm ones and ordering the Defi DIN Panel Setup for my car to keep it uniform. Of course it has to match the Nismo Instrument Panel so it will need to be RHD angled black background with amber lighting, trying to get the same for the pillar as well.
T

My gauges currently consist of:

Am looking at getting in the near future;

Exhaust Gas temperature and Inlet Air Temperatures as i consider these essential for tuning. 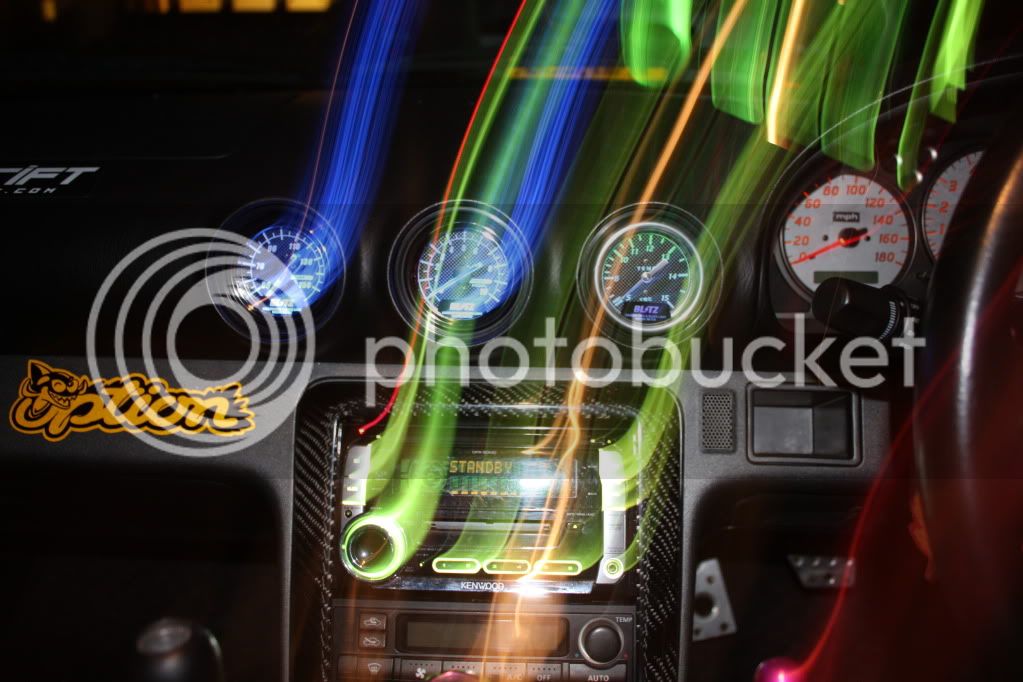 very nice dan, love defi's so i went for the most defi-looking lower budget gauges lol. they will never be defis though
M

Check out the Defi Racer series, they are much cheaper then their other ones and don't require the controller unit.

I bought mine from Nengun and their prices are very competitive.