just realised i never started one of these.
Had the car for about a year now,when i bought the car i had quite a few problem ,some that are still being set right now,but i bought the car with the intention of it being a project so its all good.

first thing got the car home to realise it was misfiring badly had to go back to southampton,but they picked it up on a flat bed and sorted the problem for me free of charge ,as they should.
took it to jez at horsham after that for an allignment check to find out it was running 7.5 degree neg camber on the rear and 4 on the front:wack: and both the front lower arms and steering arms were bent.
so we ordered new ones from nissan japan waited about 2 months for them to then turn around and say they no longer produce the steering arms and the lower arms would be another month or so! so jez got onto a couple of other places and ended up having to get tein steering arms from the states(another 4 weeks) eventually they came ,in the mean time i got a full set of adjustable allignment arms(apex) and a forge recirc to have fitted when it was there.
about 6 months had passed in this time so i got it serviced while it was there and had colder plugs fitted too.

It drove much better with this lot fitted but then i found out it had a 2 way(going round a roundabout in the wet:wack so i got onto garage d and they said they had a helical and did a straight swap for my diff plus knocked of an hour labour too, took it to have that fitted (supposed to take 6 hours) they ended up keeping the car for 3 days! turned out the diff and shafts were from a skyline so not the straight forward job they thought it would be,then when they took it out to "test drive" the car the front drivers shock fell off:annoyed: they sorted it all out for me though and the car drove alot better but i thought the gears were too long , so had polo check it over and it turned out to be a 3:9 ratio so i have now bought a skyline 37:9 (4:11 ratio) diff with shafts.
sorry for the essay lol had loads of stuff happened with this car these are just the worst bits ,!! Good thing is it helped keeping the mileage down! should have started this ages ago and spaced it out a little bit... have loads of litle bits for it spec is ....

have lots of pics to add will get some up soon

Are all the problems fixed now?

Cheers mate!!! Almost fixed now,still a couple of things to do like I need seats for it and need to get my new diff fitted and the brembos too then should be all sweet !!!!
My interior is in my living room atm as I am spraying parts of it coz it was in bad condition but its work in progress hopefully will be mostly sorted for the summer so I can go to a few shows.
its given me a chance to buy a few bits for it with it being off the road for a while, car drives sweet now just needs more power !!! Lol

Heh best way mate. More power!
Well at least it's getting there, there's no point rushing it.
I'm looking forward seeing the end product. Hope I be at some shows this summer aswel.

Cheers mate! Yeah my idea was to sort the chassis base out first then up the power, no point rushing I plan on keeping the car for a while yet.
Hope to get my fmic ,boost controller and race rad in the next month or 2(depending on selling my other car) then should be ready for 2a tune should be good for going on 300 bhp then,that should keep me happy for a while.............
Be good to get a few people to the shoiws this year!

The alloys aren't to my taste but hey. I'm looking forward to seeing how it will come along.

Not to mine either tbh but having to spend a couple of grand sorting bits and pieces out on the car they dropped down the list of priorities for now, will be getting some new rims soon,hopefully in the next couple of months,watch this space........

Mate I would have been soo angry if all those problems happened to me after buying a car!

At least I know its not just me who has bad luck though havent had any with the S15 yet but on my previous cars something was always not right or broke lol.

Love your car though its gonna be well nice when you finished getting it sorted :nod:

glad things are on the right track now after the teething problems....as said you shouldn't expect problems like that but at least they're sorted getting there

I know what you mean mate, but I wanted a project and that's what I got lol the car only had 40k miles on when I bought it and I managed to get 600 knocked off for bits I noticed needed doing so worked out only a little more than buying a proper minter at the time,just annoying not really driving it for the first 6 months !
Cheers for the comments I will keep the thread updated regularly now I started one!hopefully my other car sells quick then will have plenty of update coming!

Yeah defo on the right track and if something breaks,upgrade it !!! Lol

Looking good mate.. That's been some bad luck though, hopefully it will behave it's self from now on..

I'm also doing the EVO 8 Brembo thing for the fronts, got to get the last few bits from Dan@ DB Power and then get them on, should be awesome compaired to the current set up (which are shocking on my car), managed to get a mate to repaint and lacquer them as well (result).
Last edited: 11 February 2011

dan is a top bloke mate,and he even painted the brackets too so saves u the job,he is only down the road from me so thats lucky for me.
one thing i will say,bar the wrong spark plugs when i bought her,she has never failed me on the money every time i turn the key!
now the handling is all sorted hopefully i can get on with more fun stuff!

some of the more recent bis for my car

my new/old diff lol got this off a skyline ,37:9 is a 4:11 ratio so should be nice and short! gonna give it a good going over before i fit it,drill with wire mop then sand it zinc prime it and some comma satin black me thinks... be good as new! 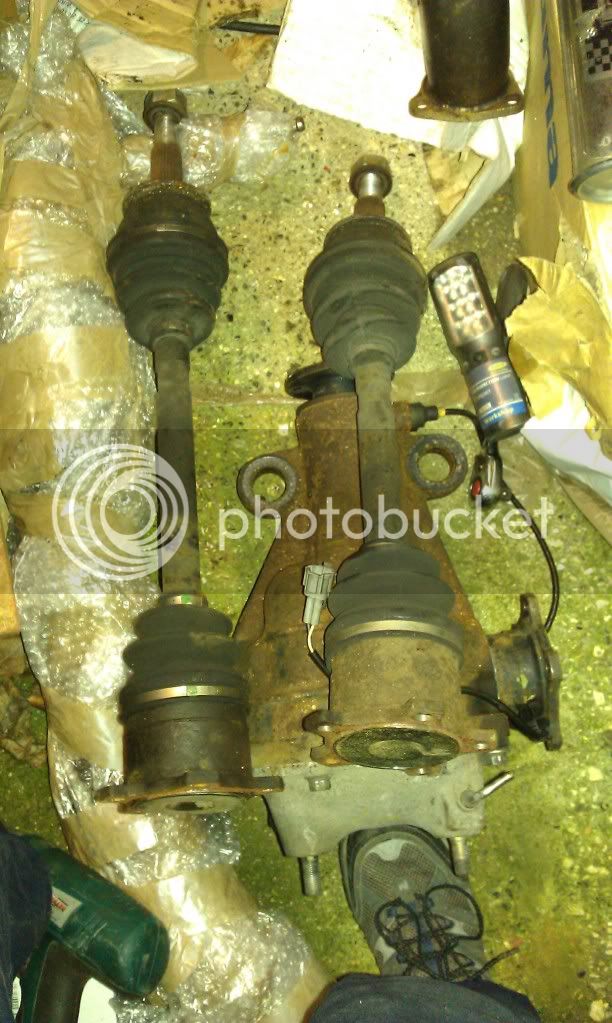 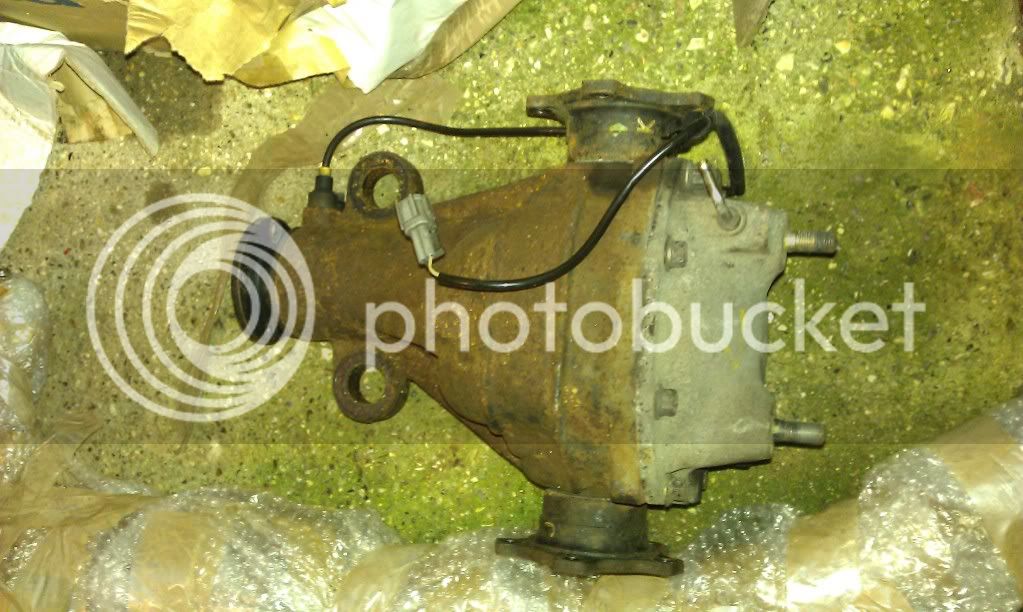 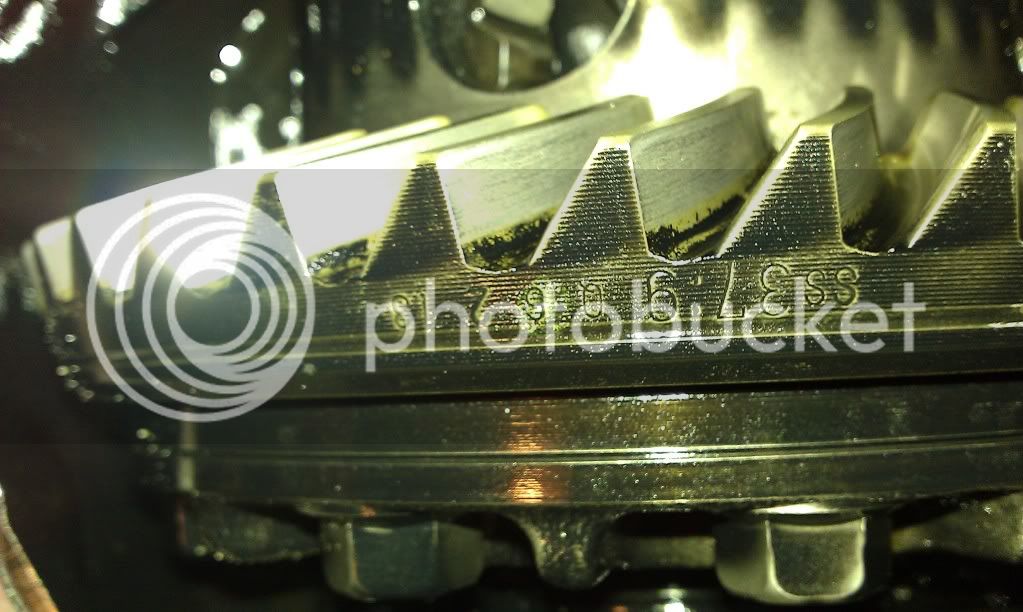 Nice work mate. I have one of those Tomei elbows waiting to go on too. The quality is exceptional.

Definately is mate, polo said it was one of the best quality elbow he had seen when I got him to fit it!

Just wish I had done the o2 sensor at the same time, needs doing now and is in a proper awkward position looks like it will be a right pita!!!!
Last edited: 11 February 2011

Some nice parts to go on there man.