Did headlights as well. 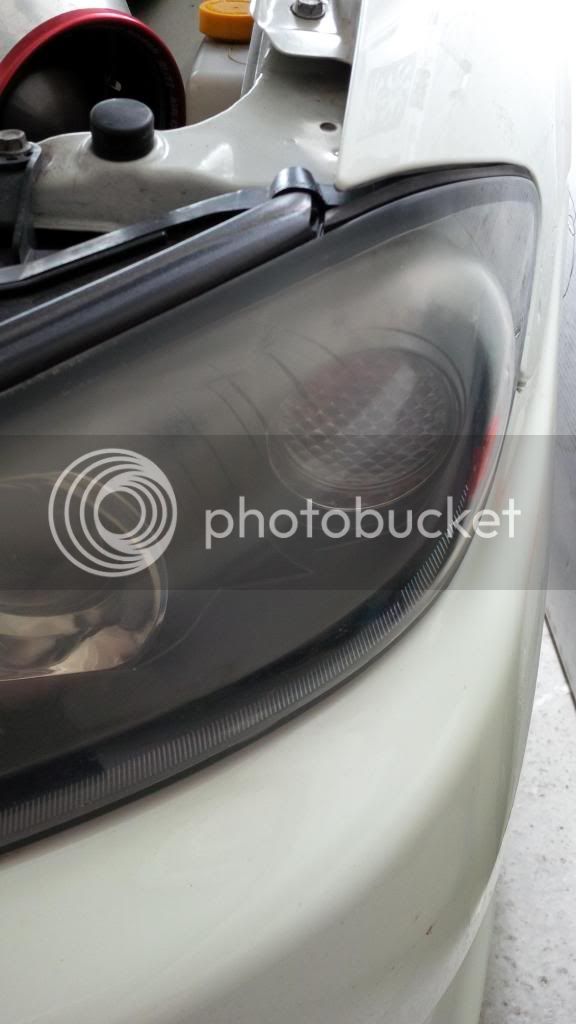 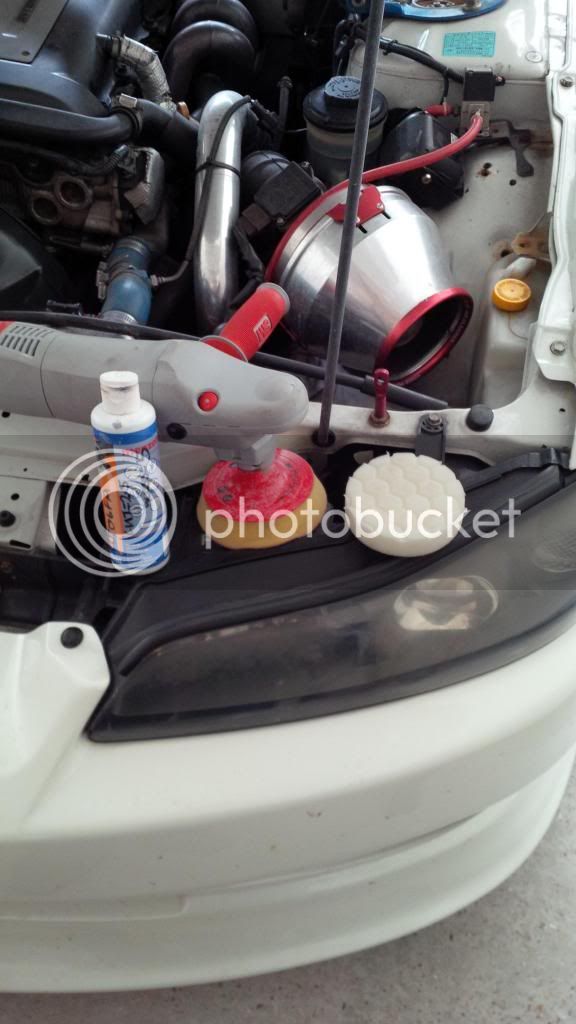 Done (will get a better shot of this over the weekend, but they came up nice) 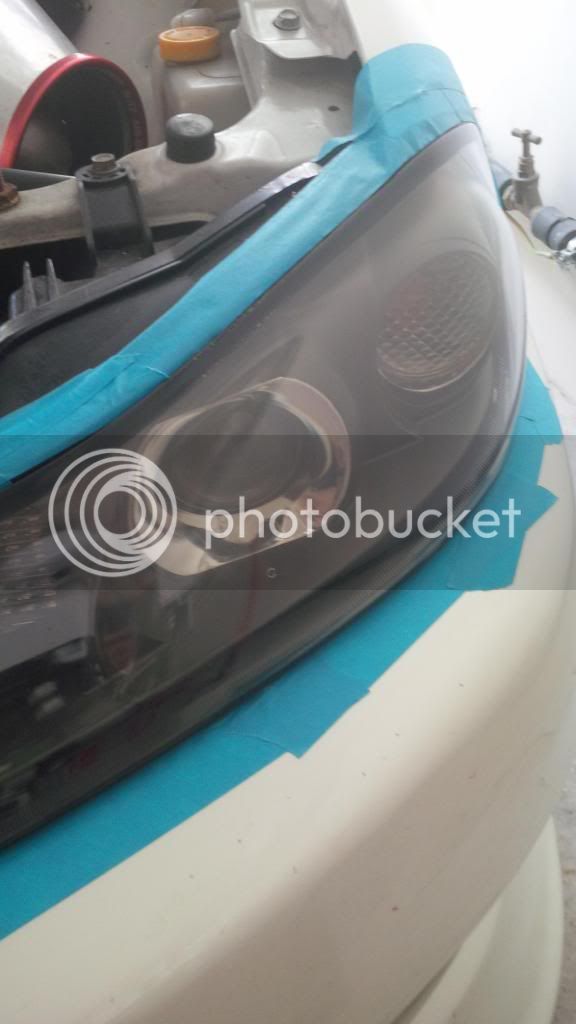 Good call man I always hand polish mine but might give them a once over with the rotary if they go crud again which I'm sure they will ha ha
Love the rocker too man!
Last edited: 21 August 2013

Gonna be a few months before all the footworks go on, so in the mean time done a couple of jobs. 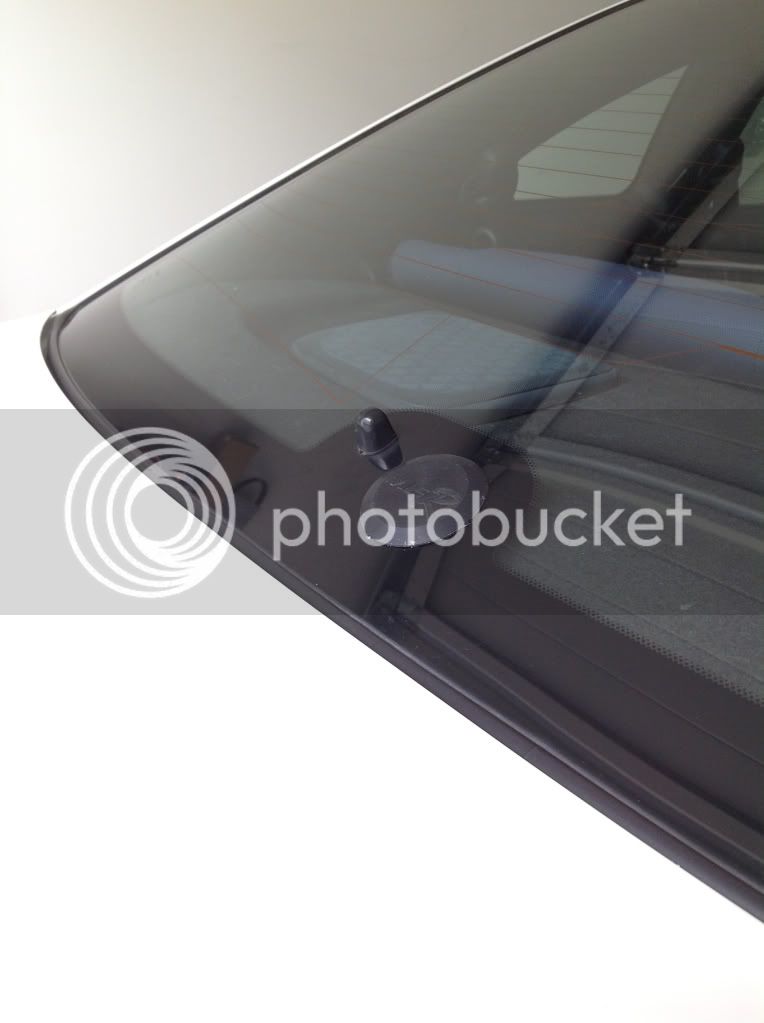 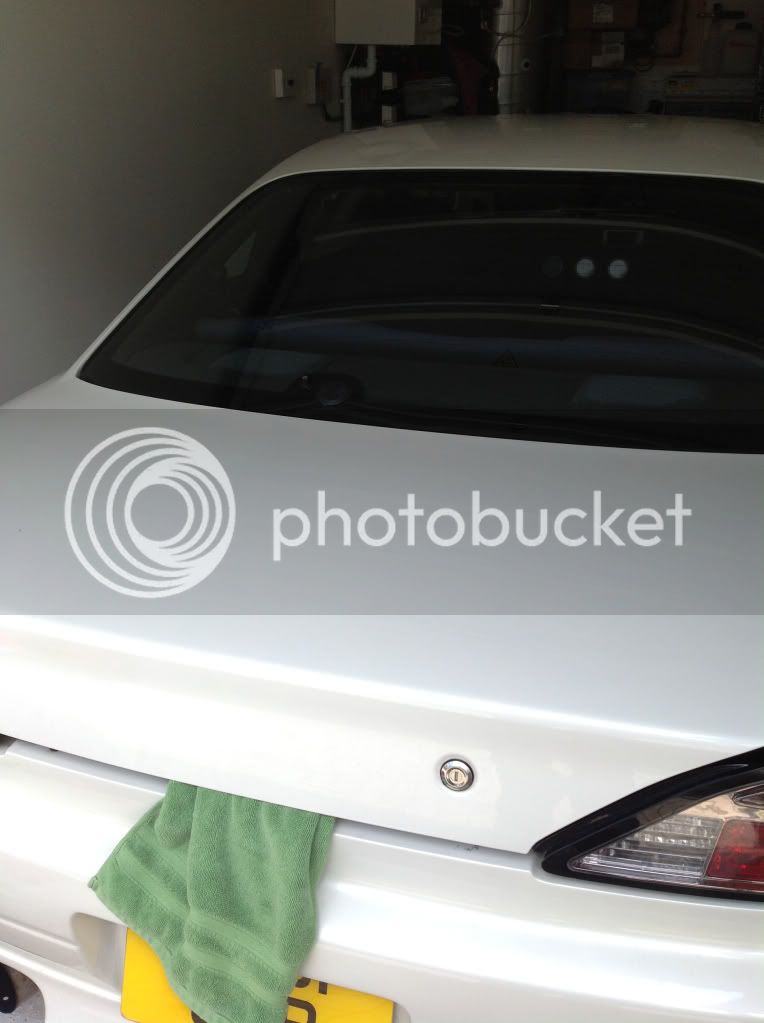 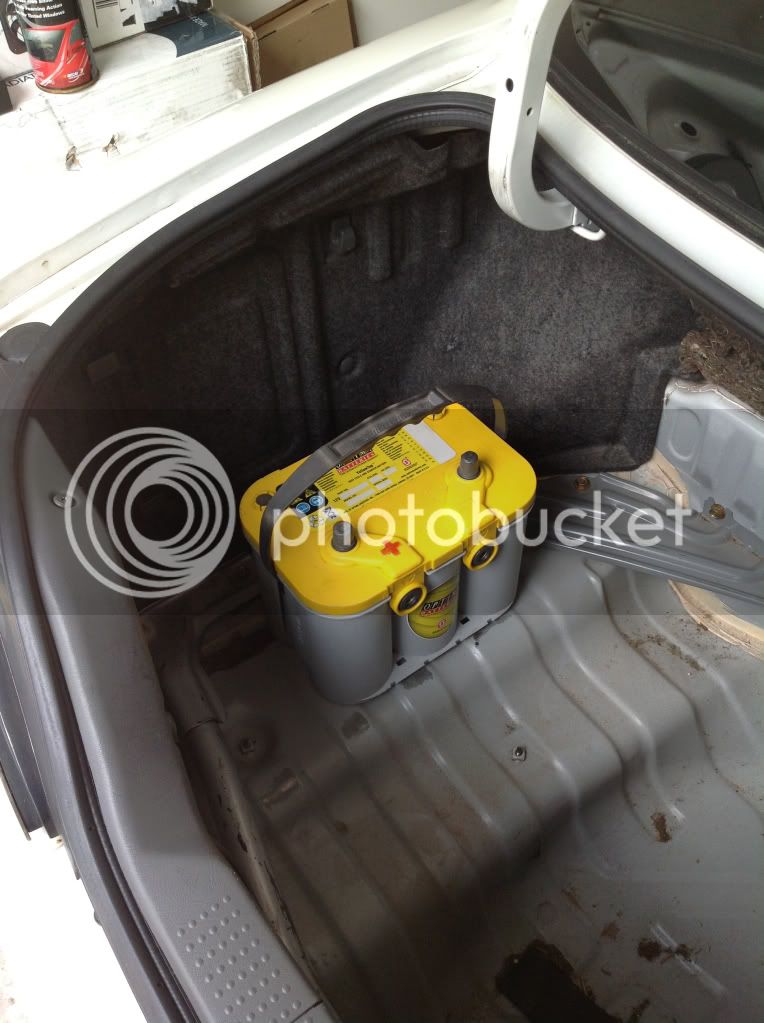 Never even occured to me the tank wouldn't fit, d'oh - need to use the wheel well or another tank I think... 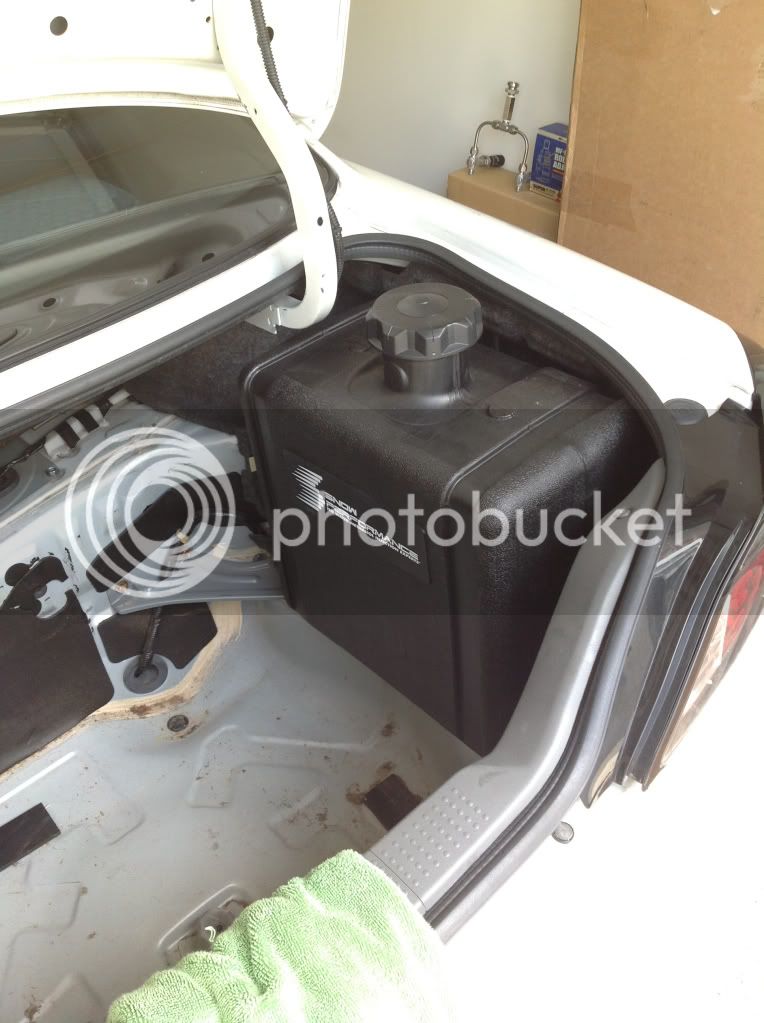 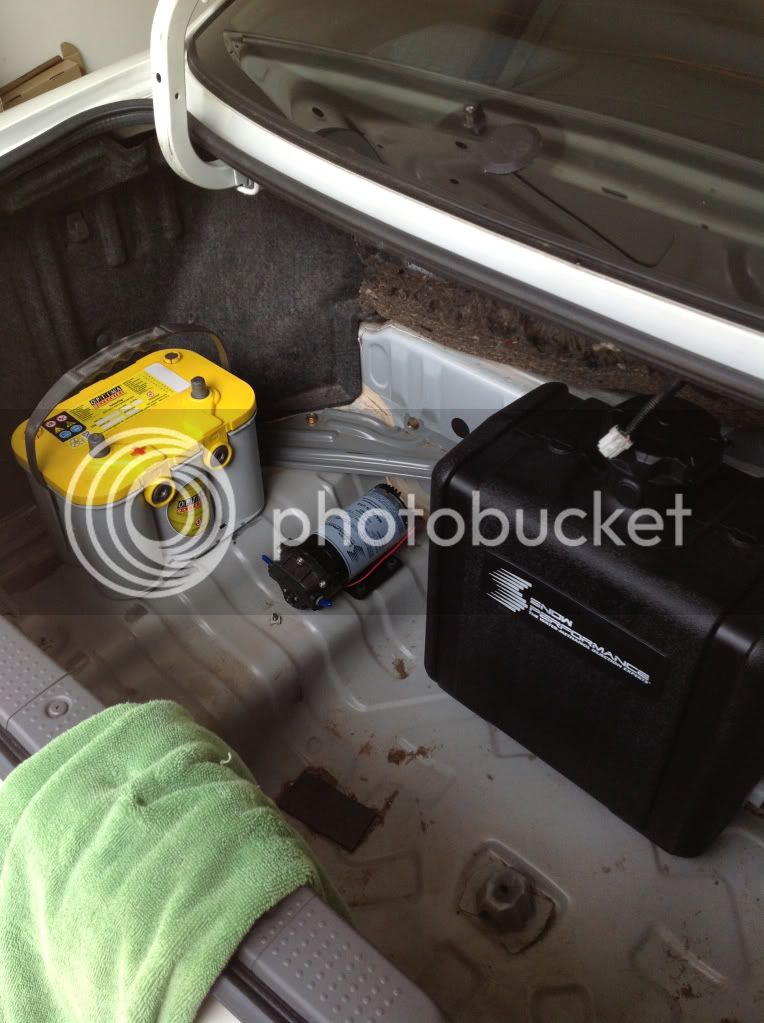 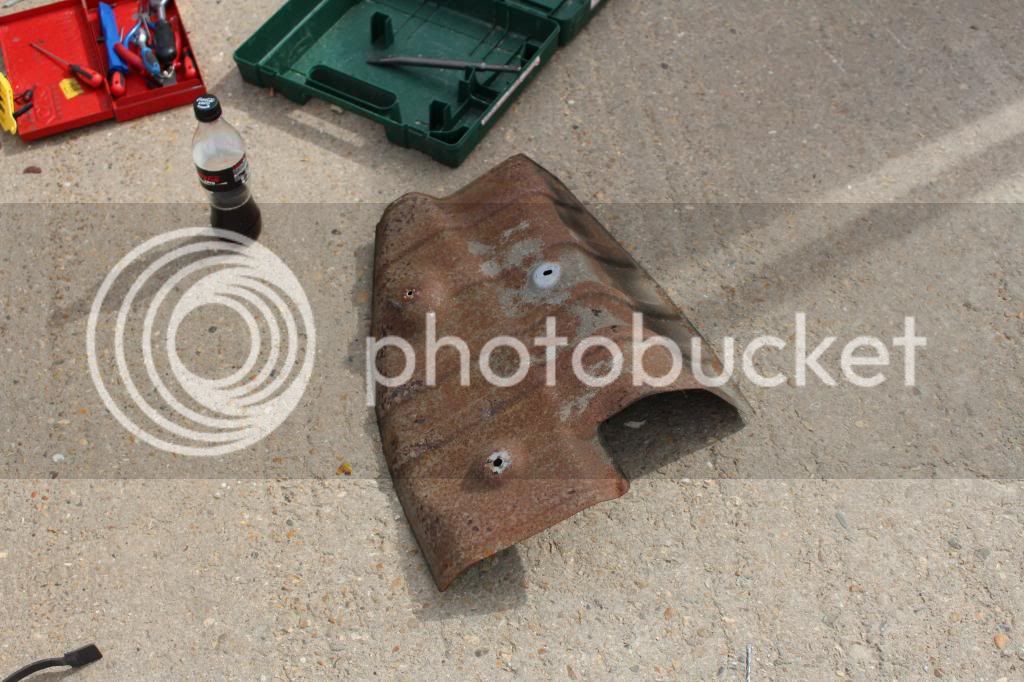 Optima tray - drilled and bolted through 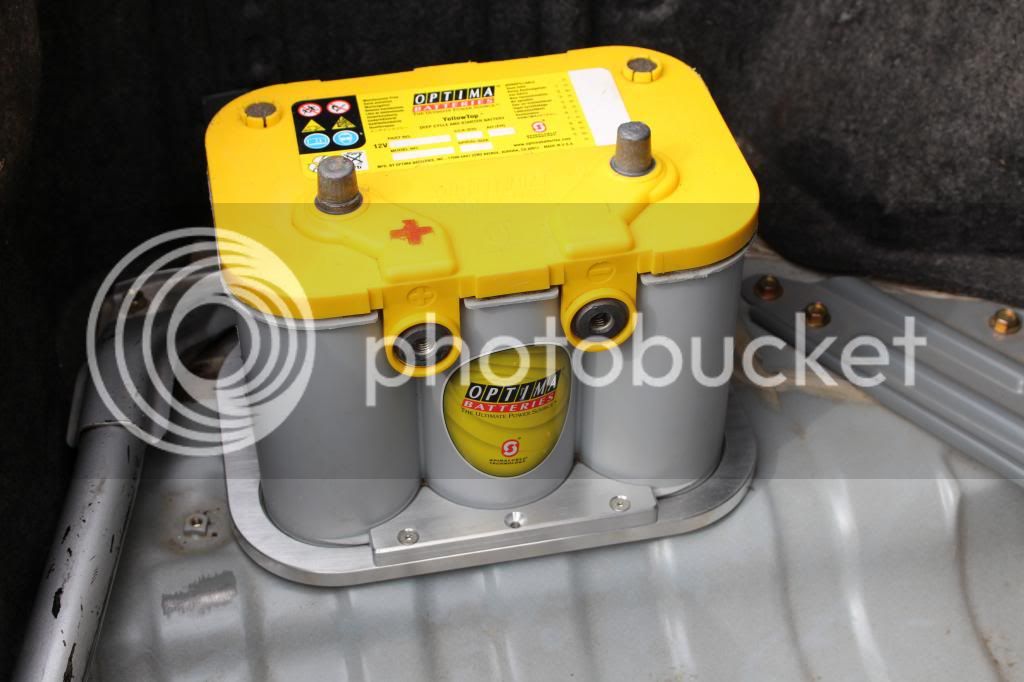 Now the battery is in, i'm waiting on the delivery of two 150Amp resettable circuit breakers, connections, front distribution block and cables, lol (so most of it), job for later in the month.

I have to put these two picks in as i was laughing at myself trying to start the design of the ECU/PDU/Sensor harnesses. many more design hours required before I start building Ash could make you a tank to fit the boot!

Cheers and what a very good idea, forgot about Ash for a bit..

Damn, made me think of other bits Ash could do as well.. lol...

Last job he was doing was converting an S12 to S13 chassis. Big job and hes was doing well. Mounting the rear frame, Putting a cage in it and loads more. Hes awesome as you have seen from my car and the BDC 350z he did not so long ago. Give him a message.

That battery clamp/tray is mint! where did you get that machined?

Will do for sure..

Bought the tray when I was in the US - from here... It proper nice - fully CNC machined out of billet....

Finally i've finished the battery relocation. Still have the final mounting of the distribution blocks but all conections are finished and it works.

Took a lot longer than I expected as each move forward resulted in something I didn't have and needed to order, nothing new there then.

The current tiny battery was only good for about 6 starts in a day following a full charge, any more any it wouldn't turn the engine over and catch, have had to have a couple of jump starts of the last 2 months, not happy (even with a nightly trickle charge).

Once the final wiring was completed I closed the two circuit breakers and though i'd see if the Optima has any charge left (it's not been charged for 3 months).. Started first time!!

All cable connections are crimped (25mm/M8) and all cable is 240amp (2Gauge) flexible with Raychem DR-25 heat shrink tubing at all ends. 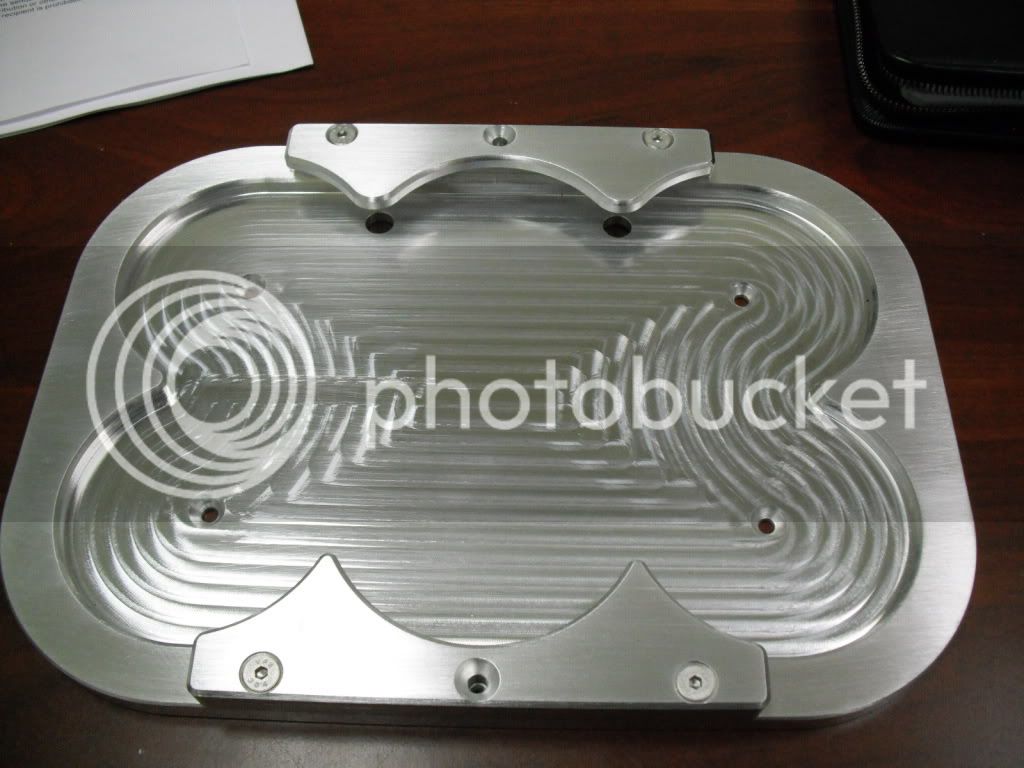 Boot circuit breaker now in the spare wheel well, will have a cover fited over the well in time. 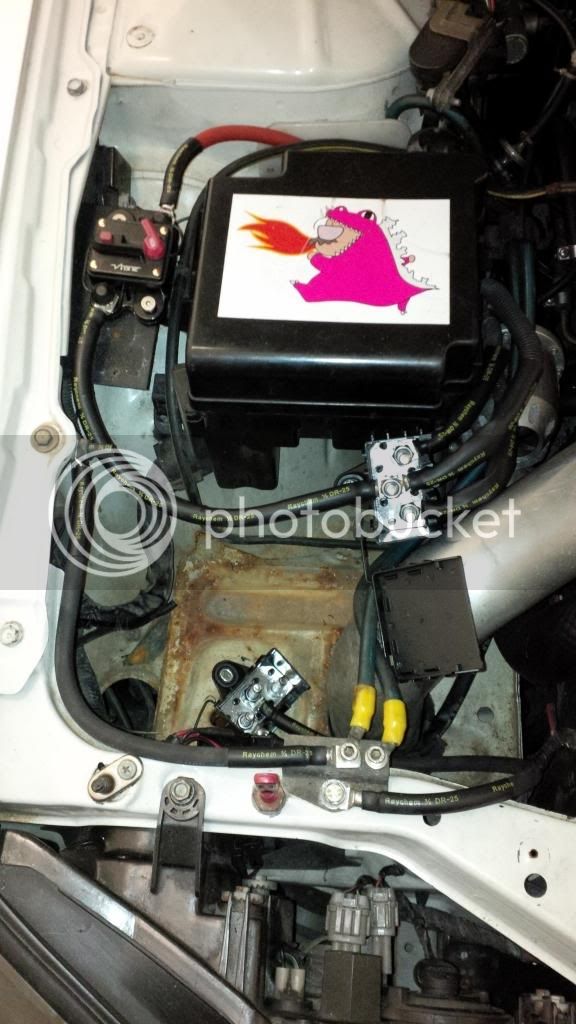 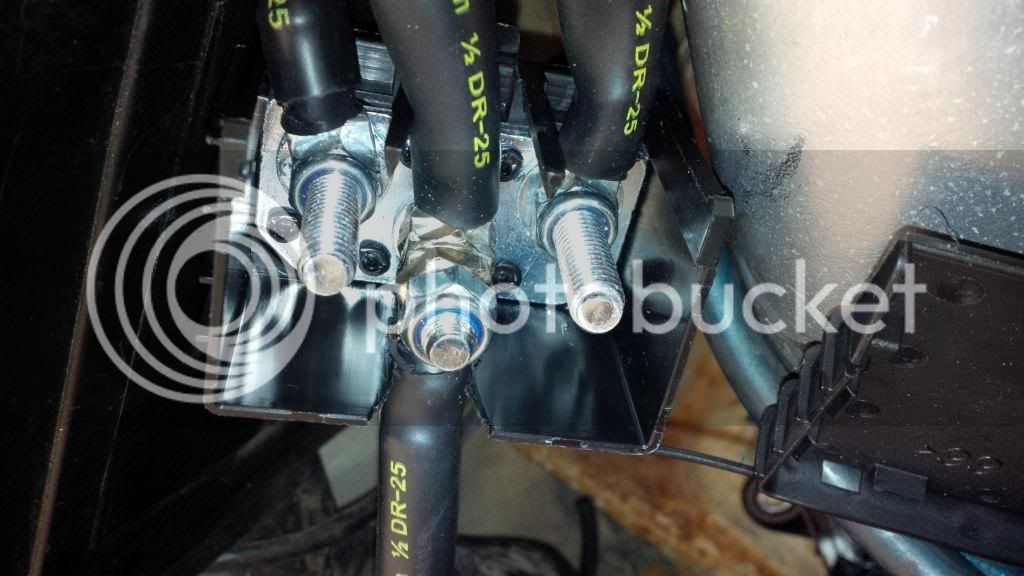 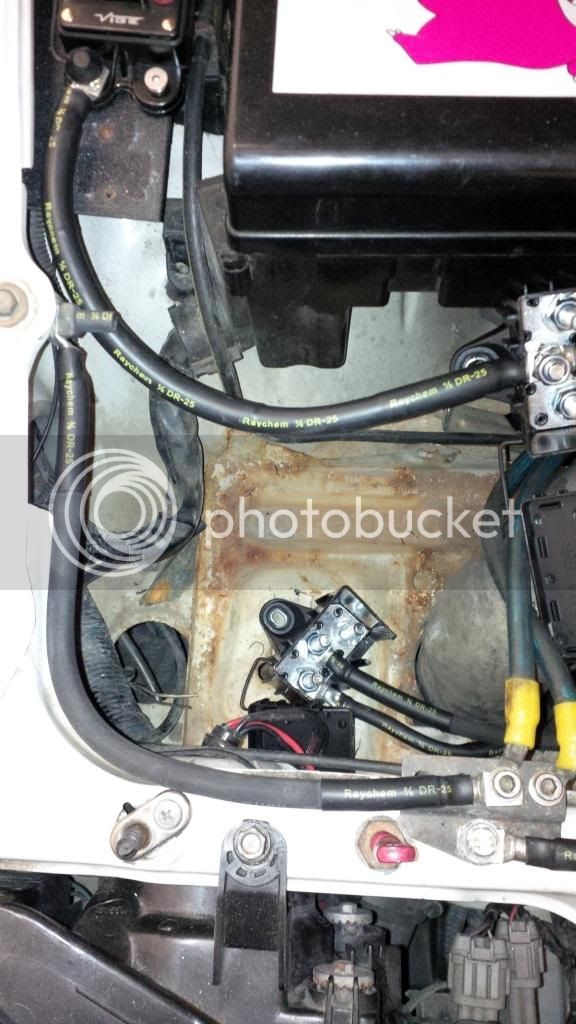 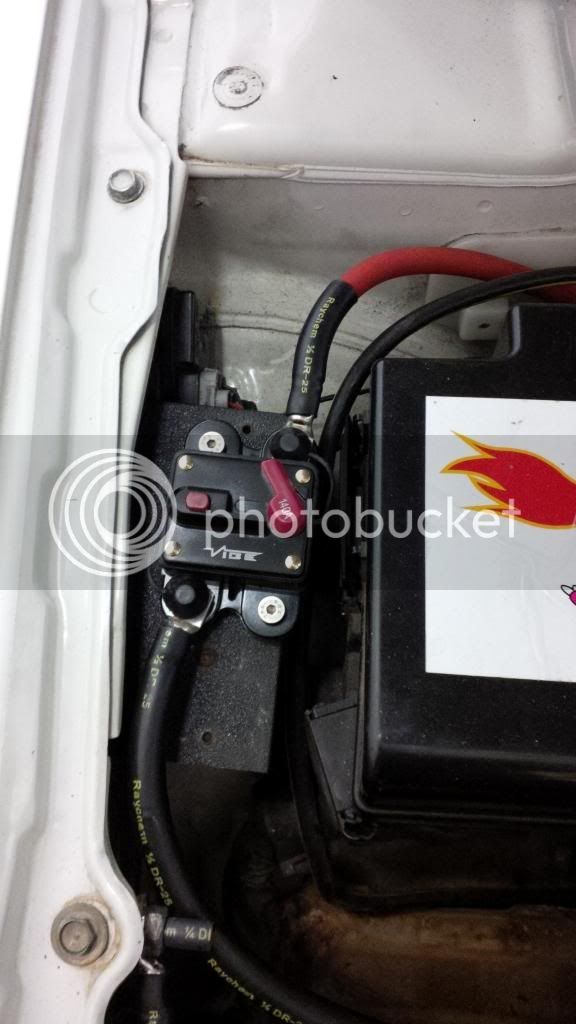 Forgot to take pics of the distribution blocks with the covers on, d'oh

Still need to make a new base for the -ve distribution block to connect to (current just taped into place) and also the +ve block needs a bracket to connect to the fuse box, limited options here due to cable lengths etc.

But i'll get around to these in time, the main thing is that it works.

Still not got the wheels on yet, probably not until the new year at this rate.

Have just fitted new PIAA silicon wipers which work great, better than using the force as it's felt like for the last few weeks. Plus have an order in with RHD but more on that when it arrives.
T

Sort that rust Bro before it spreads nasty stuff that :nod:

Strangely it was under the old battery, not so bothered at the moment as in the not to distant future the whole cars getting stripped, dipped and etch primed that'll sort the rust
T

Nice one bud:thumbs: that should sort it

I think I finaly have all the suspension parts I need for a complete re-fresh and hopefully solve the shocking bump steer and general bouncyness..

Only part to sort now is the coilovers that are sitting in my old office in the states, looking at shipping options (all expensive and really dont think i'll be able to bring back in luggage!!) but should be here one way or the other before end of January... I think I have all that Moonface sell, lol... Any all my suspension short the coilovers.. 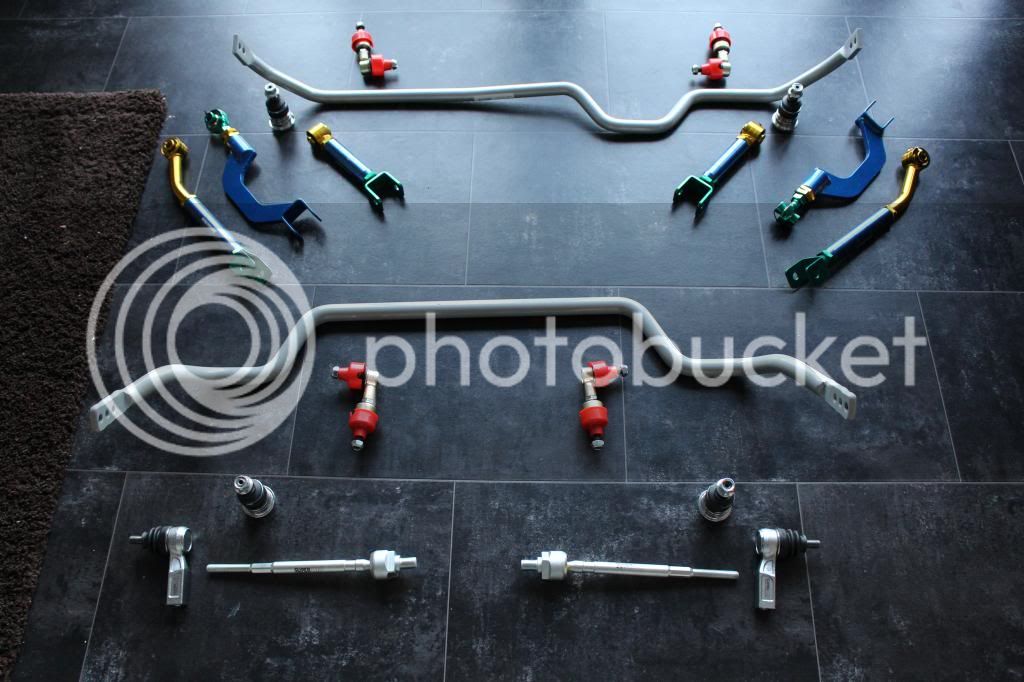 Few other bits for the Jan install 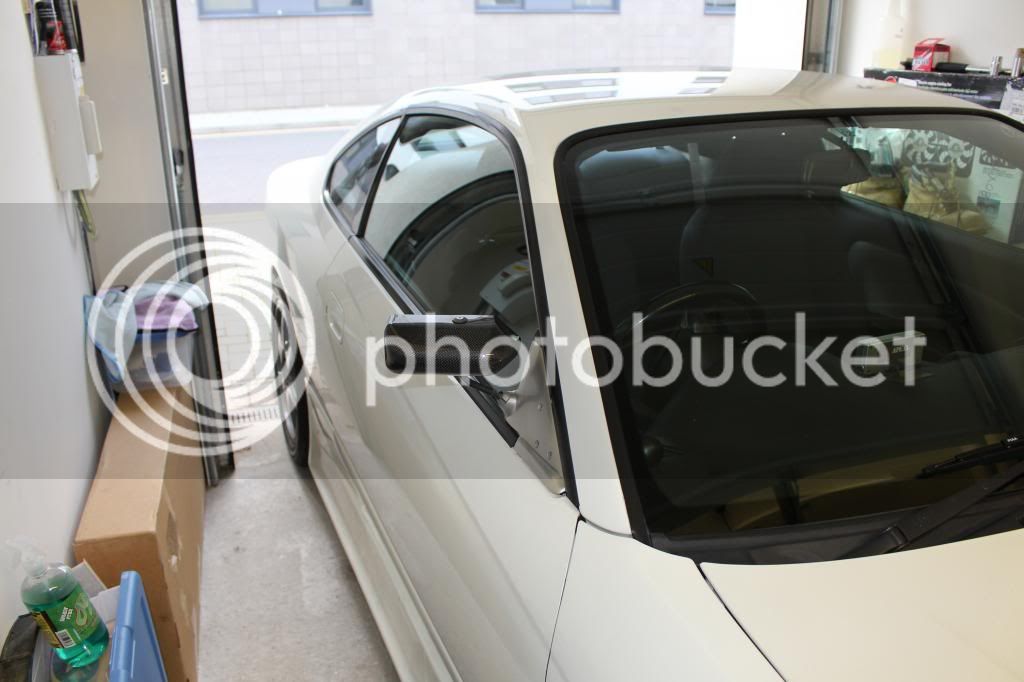 nice parts again! Do you ever get to drive it, or is it always in bits?

Actually the car is driven everyday, I do a 2hr round trip to work up and down the M23 each day, as i'm driving it so much I really want to get this suspension set up as best as possible, I have a lot of bump steer and the coilovers are shot (old Tien drift specs) and it basically just doesn't feel right. Probably the tie rods and ball joints are well shot which along with the car being low and messing up the geometry have probably all contributed to the poor ride.

Now that I have all the new parts I want i'll get them all fitted in January, must also check the rose joint on the tension rods that are already fitted as probably quite old, so may need to replace them as well..(Ikeya Formula?)

Need to get all this fitted at the same time as my new rims and the new brakes, have already booked Archenemy to do a flare and pull in preperation.... Roll on January...
T

Which code is the correct battery from optima for a boot install yellow top cheers :thumbs:

The optima I have is the YTU4.2 which is the same as the YTS4.2 just with the extra side posts which I'm not using. The US code if your interested is D34 non side post and D34/78 with side posts.

Unless you have a lot of ICE red tops are better for starting, yellow tops better for deep cycle, I travel away a lot so deep cycle is important for me.

The tray I use which is pretty trick is from optima trays (US site).

i got my battery of e-bay for a quarter of the rrp, having abused yellow tops for years when i used to compete in the SCA without any failures they're always a safe 2nd hand purchase...
T